Canterbury medical director on deadly COVID-19 outbreak: 'It's been horrible' 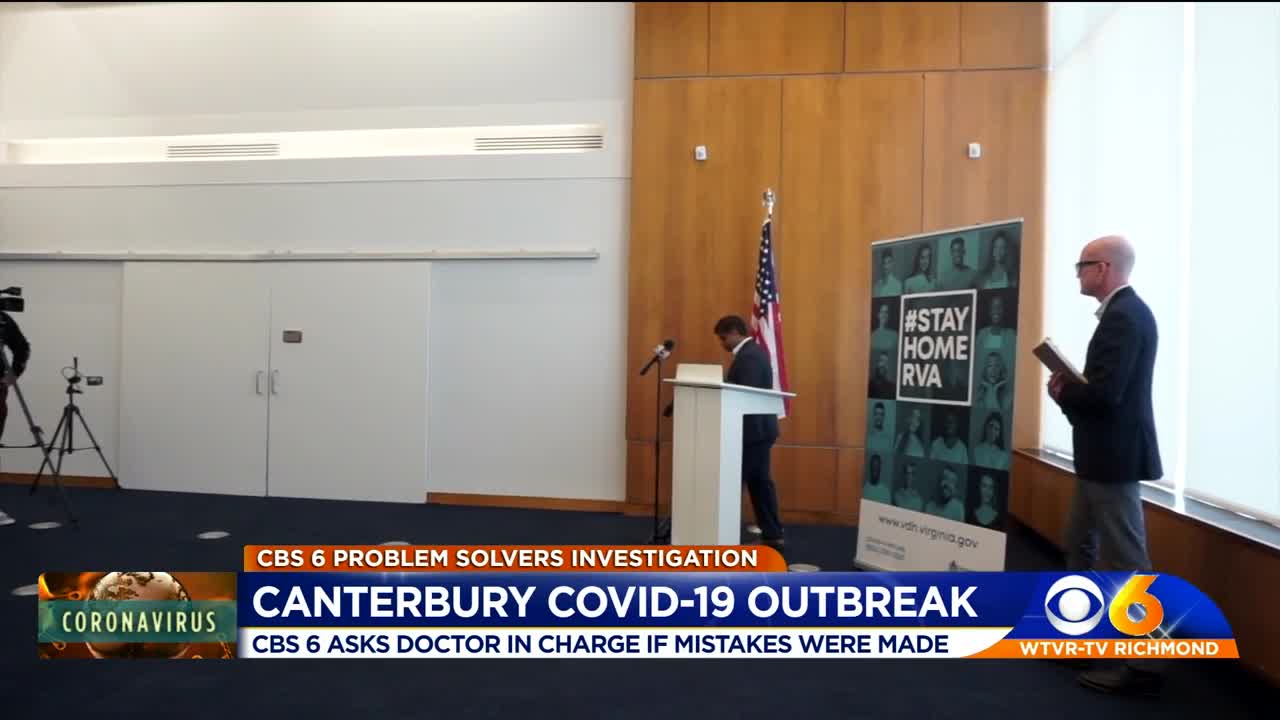 Virginia reported its first death from COVID-19 on March 14, the same day a resident at the Canterbury Rehabilitation and Healthcare Center in Henrico's West End developed a fever and cough.

HENRICO COUNTY, Va. -- On the same day Virginia reported its first death from COVID-19, a resident at the Canterbury Rehabilitation and Healthcare Center in Henrico's West End developed a fever and cough.

"We immediately isolated that patient, and we partnered with the Department of Health to test. That was our first patient test here at the facility," said Dr. Jim Wright, the Medical Director at Canterbury.

"We had been ready for this and had been meeting regularly to prepare ourselves," Dr. Wright said. "Rather than shock or panic, we began to focus on our protocols that we had set in place."

The resident had two roommates who were immediately sequestered and tested.

"Of course, we were concerned this patient was on a hallway, like most of our hallways, where nurse aides and patients themselves will travel from room to room, so the potential for spread is very high," Dr. Wright said.

But Wright said he could not test most of his aides and patients for the virus due to extremely limited supplies.

In fact, the testing he had access to at that time had a turnaround time of 11 days.

During those 11 days, Wright said the patient was "isolated, and for the most part we were correct about the people we had under suspicion."

"That was a huge gray area where you simply can't fight what you can't see, and we didn't know the size of the problem at the beginning for those reasons," Wright said.

It was not until March 23, a full nine days after the first resident started exhibiting symptoms, that Canterbury had access to widespread testing with a quick turnaround time through a private lab certified by the state.

One day later, the first two residents at Canterbury died.

Wright said that staffing issues also made his facility vulnerable and said that nursing homes like Canterbury, who receive most of their money from the federal government through Medicaid, are chronically understaffed to begin with, and that the outbreak exacerbated the issue.

"There was a lot of fear, and as a result, we had difficulty in attracting our regular staffing and engaging staff from agencies," Wright said.

Things got so bad that Wright's own wife, a physician for Bon Secours, actually took time off from her job to help at Canterbury.

"We were all doing things we normally would not be responsible for, so, for example, I was changing patients, cleaning beds," Wright said.

All the while, the virus spread through the facility.

To date, 128 residents have tested positive for COVID-19 as well as 35 staff members.

"A publicly funded nursing home is a viruses dream. People are close together, their immune systems are compromised, it is just a tinder box for that match," Wright said.

So far, COVID-19 has claimed the lives of 45 residents and many of them died in Dr. Wright's care.

"It's been horrible," Dr. Wright said before pausing. "These are not just patients, these are friends and family members, and we know that they're people's mothers and fathers and spouses, and we die a little bit every time one of our residents dies."

Recently, Henrico County Manager John Vithoulkas expressed frustration with Canterbury officials and said that they rejected the county's offer to help with testing early on.

Wright said that is not the case.

"I can't think of any case where he has actually offered help and we declined."

We asked Wright if what happened at Canterbury was random luck, or if it was something about their protocol, and how they do things there that led to the dramatic spread of COVID-19.

"I think this is our opportunity as a society to not look at a nursing home and point fingers about what they could have done better, it's an opportunity to look at ourselves and what can we as a society do better to give our elders a meaningful life, a good community space, privacy, outdoor access, all the things we want for ourselves, we need to give those to our elders."

On Thursday at 11 p.m., Melissa Hipolit talks one-on-one with the head of the Richmond and Henrico Health Departments who explains why he does not blame Canterbury for the incessant spread of COVID-19 there, and why he believes there will be social distancing in Central Virginia until at least June.