These dangerous items are the 'worst toys' of 2019, safety group says 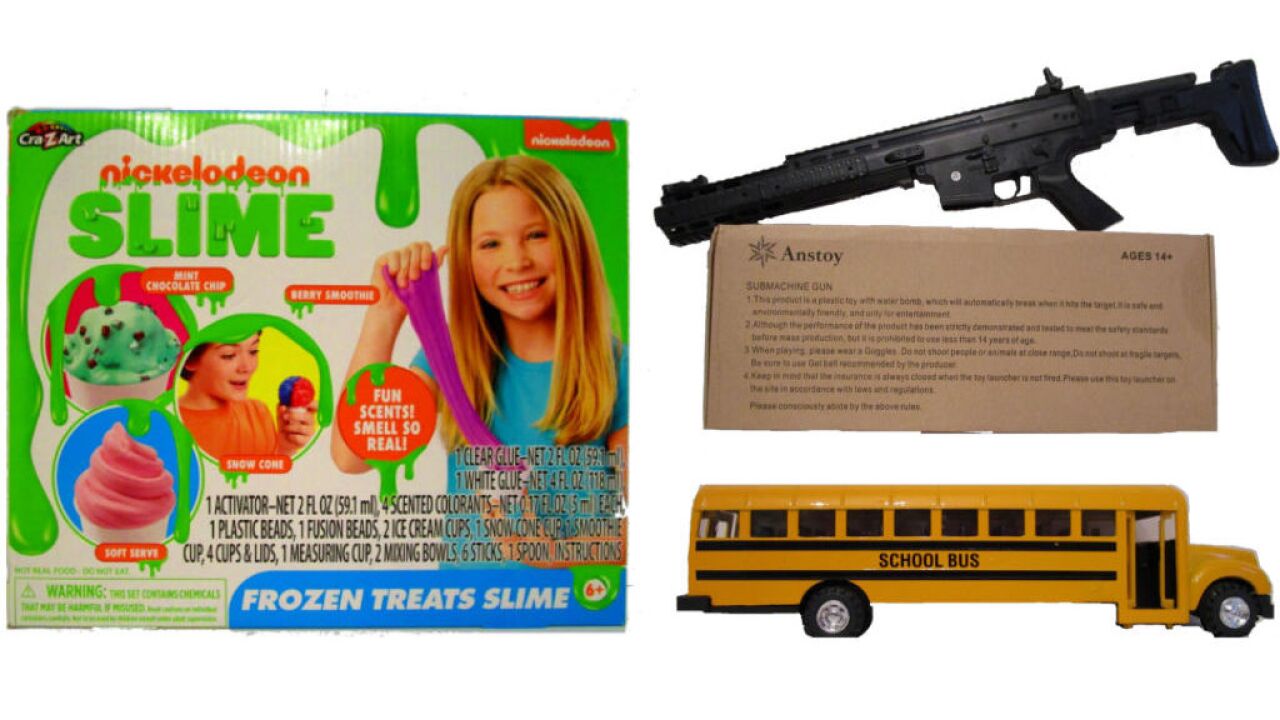 The holiday season is in full swing, which means everyone is flocking to stores to buy gifts for family and friends. But a safety group is warning consumers about 10 toys that could potentially be hazards for little ones.

The safety organization World Against Toys Causing harm, Inc., or W.A.T.C.H., released its annual "10 Worst Toys" list for the 2019 holiday season on Tuesday.

"Although intended for fun and entertainment, many toys contain hidden hazards unnecessarily putting children at risk of injury or death," the nonprofit says in a news release.

According to W.A.T.C.H., among the items on this year's list are "projectile toys that could fire with enough force to potentially cause eye injuries and toys that encourage children to jump or ride with the potential for head injuries. Some of these toys are sold without the proper safety gear or marketed with inconsistent safety messages."

Here are the 10 toys W.A.T.C.H highlighted on this year's list.

W.A.T.C.H. says the darts provided can shoot with enough force to potentially cause eye injuries.

The toy comes with removable plastic quills that can potentially be put in a child's mouth, possibly resulting in choking and blocking a child's airway, the safety group says.

These multi-colored activity balls are meant to stick together when kids play with them. But there's been reports of the connective toys getting caught in children's hair. The manufacturer, Spin Master LTD, even has a warning on the box cautioning consumers to keep the toys away from hair. The toy also poses a potential choking hazard.

This soft, ape-like stuffed toy looks cuddly but the fiber-like hair can be pulled out with minimum effort, according to W.A.T.C.H. Once separated from the toy, the hair could potentially lead to "ingestion or aspiration injuries."

The toy advertises all the colorful types of slime children can play with resembling some of their favorite frozen treats, including "mint chocolate chip" and "snow cone" varieties. But they aren't meant to be ingested. The toy even comes with a warning that the set contains chemicals that could be harmful and says "NOT REAL FOOD - DO NOT EAT." W.A.T.C.H. says this poses a possible hazard for chemical ingestion and irritation injuries.

"Given the numerous reported tragedies resulting from outfitting children with realistic toy weapons, there is simply no excuse for marketing 'toys' such as this 'submachine gun,' " W.A.T.C.H. says. " Existing regulations addressing the hazards are inadequate. Detailed replicas mistaken for lethal weaponry have resulted in numerous deaths over the years, and should never be sold as toys."

While cute and bright yellow, this school bus toy could actually be deadly if a child removes and ingests one of the small parts. The tires are removable, posing a potentially serious choking hazard.

Kids are suppose to use this toy with a "high bounce ball" and handles to jump and perform tricks, but it poses a danger if they aren't wearing protective gear — which two of the three children on the packaging are not. According to W.A.T.C.H., the toy is hazardous for potential head and impact injuries.

Children are told to use the "strength of the Cheetah Claw" to "take on enemies!" but the rigid plastic toy could hurt someone. According to the safety group, the toy poses a potential hazard for eye and facial injuries.

Harmless pull along toy? Not quite. According to W.A.T.C.H., pull along toys such as this colorful caterpillar could pose a risk for strangulation and entanglement injuries, as the string is about 24 inches long.