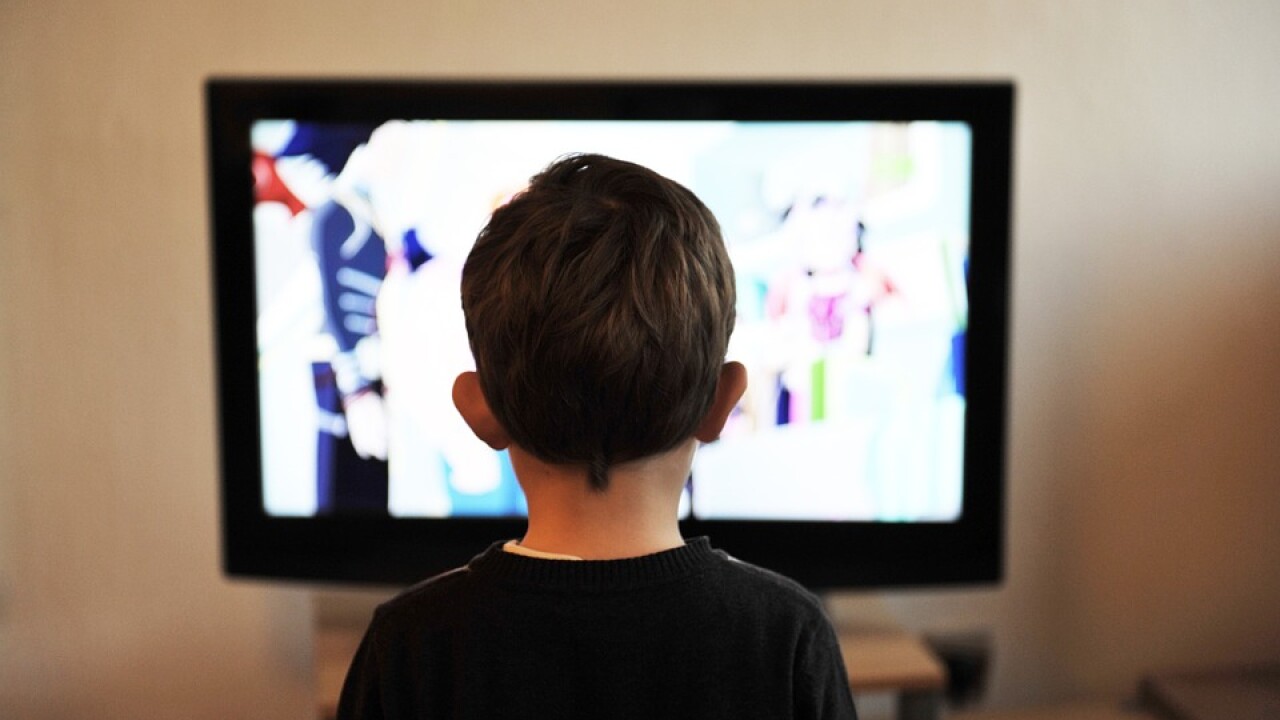 Screen time use by infants, toddlers and preschoolers has exploded over the last decade, concerning experts about the impact of television, tablets and smartphones on these critical years of rapid brain development.

A new study scanned the brains of children 3 to 5 years old and found those who used screens more than the recommended one hour a day without parental involvement had lower levels of development in the brain's white matter -- an area key to the development of language, literacy and cognitive skills.

"This is the first study to document associations between higher screen use and lower measures of brain structure and skills in preschool-aged kids," said lead author Dr. John Hutton, a pediatrician and clinical researcher at Cincinnati Children's Hospital. The study was published Monday in the journal JAMA Pediatrics.

"This is important because the brain is developing the most rapidly in the first five years," Hutton said. "That's when brains are very plastic and soaking up everything, forming these strong connections that last for life."

Studies have shown excessive TV viewing is linked to the inability of children to pay attention and think clearly , while increasing poor eating habits and behavioral problems. Associations have also been shown between excessive screen time and language delay, poor sleep, impaired executive function , and a decrease in parent-child engagement.

Even more concerning, say experts, are the young ages at which children are being exposed.

"About 90% are using screens by age one," said Hutton, who published a number of studies that used MRIs to research the impact of reading versus screen use by kids. "We've done some studies where kids are using them by 2 months old to 3 months old."

The new study used a special type of MRI, called diffusion tensor imaging, to examine the brains of 47 brain healthy children (27 girls and 20 boys) who had not yet started kindergarten.

A diffusion tensor MRI allows a good look at the white matter of the brain, responsible for organizing communication between the various parts of the brain's gray matter.

It's the gray matter which contains the majority of the brain cells telling the body what to do. White matter is made up of fibers, typically distributed into bundles called tracts, which form connections between brain cells and the rest of the nervous system.

"Think of white matter as cables, sort of like the telephone lines that are connecting the various parts of the brain so they can talk to each other," Hutton said.

A lack of development of those "cables" can slow the brain's processing speed; on the other hand, studies show that reading, juggling or learning and practicing a musical instrument improves the organization and structure of the brain's white matter.

Before the MRI, the children were given cognitive tests, while the parents filled out a new scoring system on screen time developed by the American Academy of Pediatrics.

The test measures how much access a child has to a screen (allowed at meals, car, in line at store?), the frequency of exposure (age started, number of hours, at bedtime?), content (chooses own? watches fighting or songs or education?) and "dialogic" interaction (does the child watch alone or does a parent interact and discuss the content as well?).

The results showed that children who used more than the AAP's recommended amount of screen time, of an hour a day without parental interaction, had more disorganized, underdeveloped white matter throughout the brain.

"The average screen time in these kids was a little over two hours a day," Hutton said. "The range was anywhere from about an hour to a little over five hours."

In addition, the tracts of white matter responsible for executive functions were also disorganized and underdeveloped (the parts of the brain shown in blue in the image).

"These are tracks that we know are involved with language and literacy," Hutton said, "And these were the ones relatively underdeveloped in these kids with more screen time. So the imaging findings lined up pretty perfectly with the behavioral cognitive testing finding."

"These findings are fascinating but very, very preliminary," pediatrician Dr. Jenny Radesky wrote in an email. Radesky, who was not involved in the study, is the lead author on the American Academy of Pediatrics 2016 guidelines on screen use by children and adolescents.

"We know that early experiences shape brain growth, and media is one of these experiences. But it's important for parents to know that these results don't show that heavy media use causes 'brain damage,'" Radesky wrote.

Hutton agrees. "It's not that the screen time damaged the white matter," he said, adding that what could be occurring is that screen time is too passive for brain development.

"Perhaps screen time got in the way of other experiences that could have helped the children reinforce these brain networks more strongly," he said.

The first years of life need to be focused on human interactions that encourage speaking, interacting socially and playing with loving caregivers to develop thinking, problem-solving and other executive skills.

"There's a really great quote in brain science: Neurons that fire together wire together," Hutton said. That means the more you practice anything the more it reinforces and organizes the connections in your brain.

In addition to the MRI results, excessive screen time was significantly associated with poorer emerging literacy skills and ability to use expressive language, as well as testing lower on the ability to rapidly name objects on cognitive tests taken by the 47 children in the study.

"Remember that this is all relative," Hutton said, adding that more in-depth clinical trials need to be done to tease out the specifics.

"Still, it's possible that over over time, these effects can add up," Hutton said. "We know that kids who start behind tend to get more and more behind as they get older.

"So it could be the case that kids who start with less well-developed brain infrastructure may be less likely to be engaged, successful readers later in school," said Hutton, who also directs the Reading & Literacy Discovery Center at Cincinnati Children's.

Radesky wants to see the results replicated in other populations. "Researchers and pediatricians should take it as a launching point for future research," she wrote. "There are so many other home and family factors that affect brain development -- such as stress, parent mental health, play experiences, language exposure -- and none of these were accounted for in this study."

What parents can do

"It can feel overwhelming to think that our every parenting decision impacts our child's brain development, but it's important to also see this as an opportunity," Radesky said.

"There are parent-child activities we know help children's development: reading, singing, connecting emotionally, being creative, or even just taking a walk or dedicating some time in our busy days to laugh together," she added.

The AAP has tools to calculate your child's media time and then establish a family media plan. Basic guidelines are as follows:

No baby under 18 months old should be exposed to screen media, other than video chatting with friends and family, the AAP says. Babies need to interact with caregivers and their environment, and not be placed in front of media as a babysitter.

In fact, a study found that even having the TV on in the same room with a baby or toddler negatively impacted their ability to play and interact.

Children from 3 to 5 years old can benefit from quality TV shows, such as "Sesame Street," the AAP says. A well designed show can improve a child's cognitive abilities, help teach words, and impact their social development.

But the AAP warns that many educational apps on the market aren't developed with input from developmental specialists and can do more harm than good when they take a child away from playtime with caregivers and other children.

And just like toddlers, preschoolers learn much better from any educational materials when they are co-viewed, and the caregiver interacts with the child about the material.