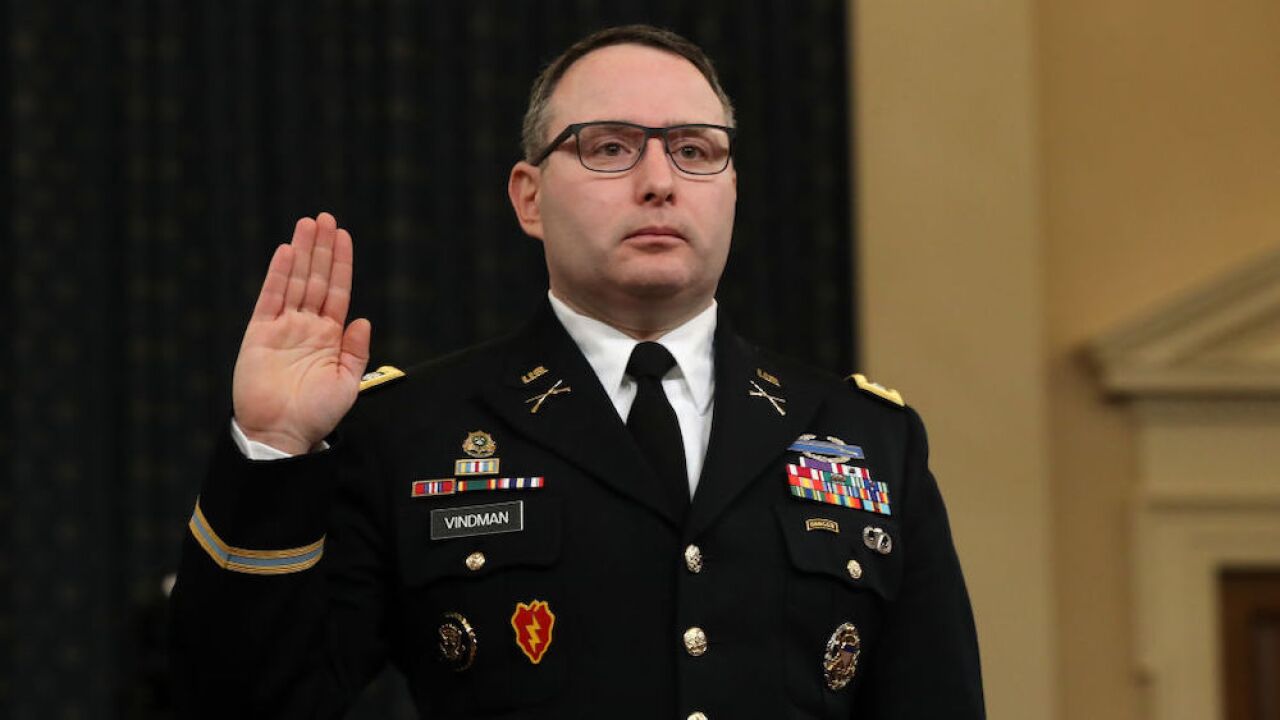 A lawyer representing Lt. Col. Alexander Vindman , the National Security Council's Ukraine expert who testified publicly this week in the impeachment hearings, sent a letter to Fox News on Wednesday asking the network for a retraction.

The request for a retraction centers around an October 28 segment on Laura Ingraham's prime time show, "The Ingraham Angle."

During that segment , Ingraham seemed to suggest Vindman, a decorated military officer, was perhaps more loyal to Ukraine than the United States. Vindman was born in Ukraine but grew up in the US.

"Isn't that kind of an interesting angle on this story?" Ingraham asked her guest John Yoo, a law professor who served in President George W. Bush's administration.

"I find that astounding," Yoo replied. "Some people might call that espionage."

Vindman's attorney, David Pressman, characterized the segment in his letter as "false and defamatory" and "deeply flawed and erroneous," noting espionage is punishable by death.

Vindman, a Purple Heart recipient, has been a target among Trump and his allies for his testimony before House investigators. Vindman has testified that he believes it to be "improper for the President of the United States to demand a foreign government investigate a US citizen and a political opponent."

Trump and his allies have retaliated against Vindman's testimony by calling him a so-called "Never Trumper" and questioning his patriotism, even though it was his job as the White House's Ukraine expert to work with the Ukrainian government. At his hearing on Tuesday, Vindman insisted that he is a "never partisan" after GOP lawmakers suggested that he was biased against the President.

Pressman said that Ingraham's segment "sparked a torrent of republications and copycat false charges" and was amplified by Trump on Twitter.

"Fox News has a grave responsibility to the truth, "Pressman wrote. "The segment was not true. It has now been repeated by some of the most powerful people in the world."

"It is causing great pain," Pressman added. "We ask you to retract the coverage, correct the record, and publish the truth."

After the controversial segment, Yoo wrote an op-ed for USA Today in which he conceded he "really stepped in it" and clarified that he meant to say Ukraine had engaged in "espionage." Yoo also appeared on CNN and said he did "regret the choice of words" he had used in the Ingraham interview.

A Fox News spokesperson pointed to Yoo's clarifications when asked for comment on Pressman's letter to the network.

"As a guest on Fox News, John Yoo was responsible for his own sentiments and he has subsequently done interviews to clarify what he meant," the Fox News spokesperson said.