Kyler's Kicks: How a victim of bullying used what almost killed him to start his own nonprofit

Bullied teen uses what almost killed him to start nonprofit 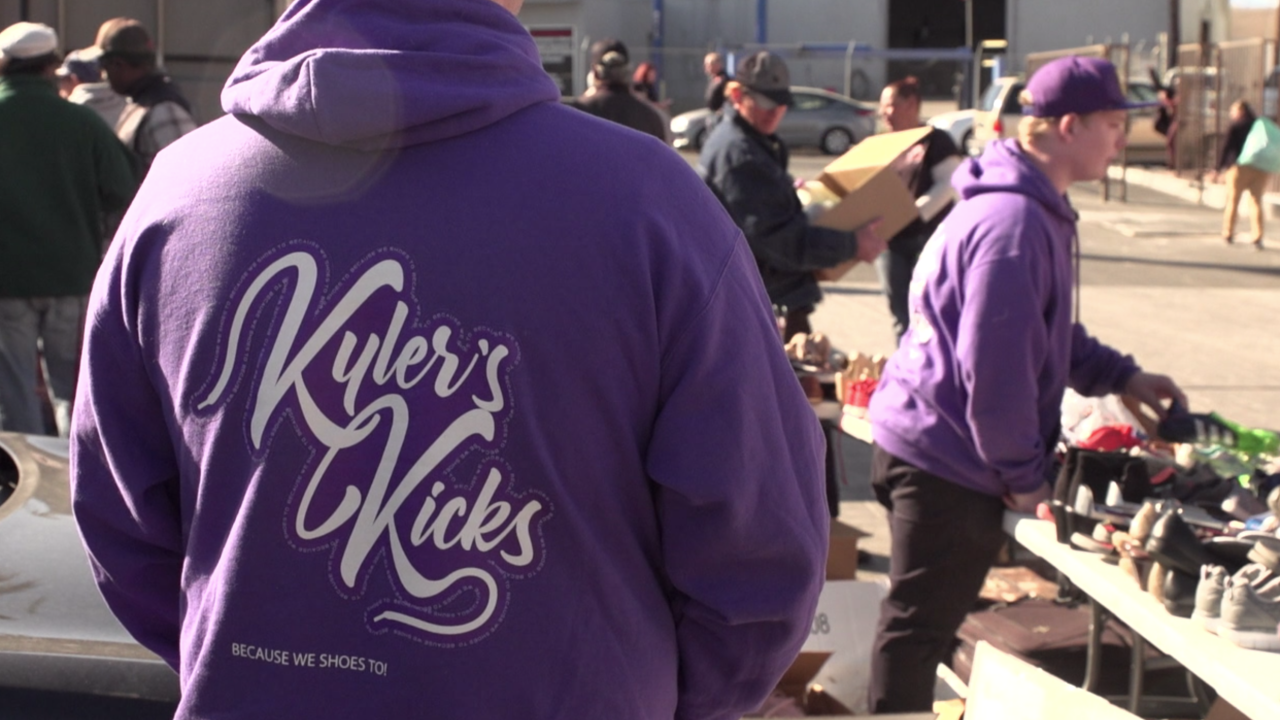 His family’s apartment is covered from floor to ceiling with shoe boxes; so many that his mother, Sherise Nipper, says they sometimes crash down on them while they’re sleeping.

Their Las Vegas apartment is just for the overflow. The family has a storage unit stacked to the brim with shoes as well.

It’s all part of an organization Kyler started at just 11 years old, Kyler’s Kicks. His goal is to give everyone access to shoes.

Why would an 11-year-old feel the need to start a nonprofit?

“I’m stopping what happened to me from happening to anybody else,” said Kyler. “If I would have walked in there and got a brand-new pair of Jordans, the bullying would have stopped and everything would have been fine.”

As a child in Colorado Springs, Colorado, Kyler was bullied because of his shoes. His bullying ultimately escalated to an extreme level.

Kyler remembers it vividly, “I was eventually stabbed in the chest because of my shoes.”

The stabbing punctured his lung and almost cost Kyler his life.

“All I knew was that I couldn’t breathe,” said the now 14-year-old.

His mother Sherise gazed off into the distance as she recollected the events of that day.

“When we got to the school, Kyler was already blue. He could no longer even speak. I thought I would never be able to hear my child’s voice again or hug him or talk about his day or anything. All in a matter of seconds. We didn't think Kyler was going to make it.”

Sherise says her son’s life was saved because of a staff of twelve emergency surgeons.

Three years later, Kyler’s family is still struggling from the pain of October 7, 2016. Looking for new opportunities for Kyler and his nonprofit, the family moved from Colorado Springs to Las Vegas.

“Ever since that day, every time the phone rings I must say we all get a little tense still three years later, especially if Kyler’s not with us,” said Sherise. “He’s never going to be the same. We lost a part of Kyler the day that day he was stabbed.”

While handing out shoes at one of his nonprofit’s many events, Kyler is calm, collected and confident.

You would never know that underneath his cool exterior, Kyler has a demon of his own – post-traumatic stress disorder or PTSD.

His family has a front row seat to how the trauma has affected his life.

“PTSD is horrific. He can’t go into public places,” said his mom. “He can’t do things a lot of regular 14-year-olds do.”

Kyler has to find alternatives to make life more bearable. He is now home schooled, which he says allows him to work harder on Kyler’s Kicks.

He doesn't want any other child or teen feeling unsafe at school because of their shoes.

In the three years since starting Kyler’s Kicks, the nonprofit has given out more than 29,000 pairs of shoes.

Kyler has paired up with big names, such as Zappos and Lady Gaga’s Born This Way Foundation, to help raise awareness and expand his impact.

Those touched by Kyler’s story send him shoes from all over the world, including a school in California that continually donates on his behalf.

Schools and other organizations around the Las Vegas area house Kyler’s Kicks Shoe Closets, where anyone can pick out their own shoes if they are in need.

But it’s not just about the shoes for Kyler. He believes his nonprofit has saved him in a way nothing else has; it’s helped him heal from the traumatic events that started the nonprofit in the first place.

“We take Kyler to every kind of PTSD therapy you can even imagine,” said Sherise. “Nothing works as well for him as giving out shoes. Kyler’s Kicks gives him strength. It gives him courage. When Kyler doesn’t have shoes surrounded by him, he’s a weak little kitten. But you put Kyler out there with a thousand pairs of shoes he’s giving away and all of a sudden he’s got all of this… He’s like Popeye, it’s his spinach.”

Kyler and his family are in awe of the impact Kyler’s Kicks has had on the community in the short time it’s been around.

More than that, his parents are proud of his humble beginnings.

“Me and Kyler’s dad talk a lot about Kyler’s resilience. The fact that he can go through the stabbing but more important than that, we’ve been living on the streets and in a homeless shelter and in and out of weekly hotels. We lost everything when Kyler was stabbed, and no matter where Kyler is, he wakes up in the morning whether he’s got a bed to sleep in or not and says, ‘Alright man, let’s go and give out some shoes.’”

It doesn’t stop at shoes for Kyler.

Even though he’s found a way to deal with his PTSD and heal from the psychological and emotional wounds he received three years ago, he recognizes not everyone is as lucky. He’s currently hard at work creating a safe space for children and teens to access free mental health care.

“Our idea at the lounge,” said Kyler, “is to have people’s brains going and think, ‘How can I make my life better? How can I make this better?’”

Kyler’s Kicks Lounge is scheduled to be up and running in Las Vegas by December 1 of this year, and he hopes to open more in other cities in the future.

“If you’re ever going through any pain or you’re hurting or anything,” said Kyler, “just choose kindness and do something that will help out the community.”

If you would like to help Kyler’s mission, you can visit Kyler's Kicks Facebook page for more information.