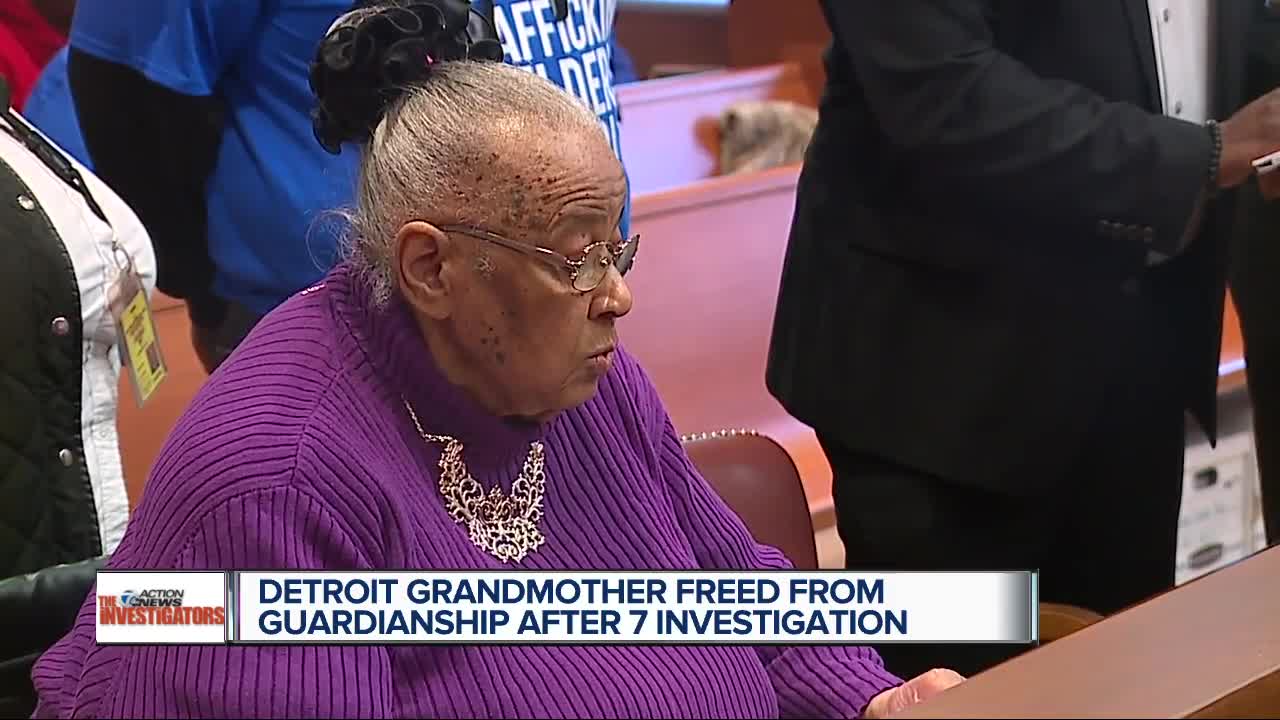 A Detroit grandmother is no longer subject to guardianship after a judge ruled in the case that was first publicized by a 7 Action News investigation. A judge ruled Thursday that a 78-year-old Detroit grandmother was free to make her own medical, legal and financial decisions after she claimed she was unfairly put under guardianship by Adult Protective Services.

Earlier this year, Bessie Owens discovered she had been placed under guardianship after Adult Protective Services investigator Tresna Tupper had petitioned the court, saying Owens was "medically frail" and "unable to manage her affairs."

Owens said all she needed was a wheelchair ramp so she could get out of her house safely. Instead, court records show Tupper told Chief Judge Freddie Burton Jr. that she couldn't find Owens' adult children to tell them about the guardianship, as required by law. Reporters later easily found Owens' daughters on Facebook.

On Thursday, the judge terminated the guardianship amid cheers in the courtroom, and also put Adult Protective Services on notice that things need to change with how they're petitioning the court to put seniors under guardianship.

An APS supervisor — appearing in court in Tupper's place — testified that Tupper followed APS protocol, but ultimately no one objected to Owens' request to drop the guardianship and conservatorship.

"It does look like there's some things that, in the course of doing your job, that some things were missed," Burton said.

Burton also waived $687.50 in legal fees c harged to Owens by her then-conservator, lawyer Cynthia Williams. Owens was charged the fees despite never having met with Williams.

Today, Williams argued briefly with the judge, but she ultimately waived her fees and the judge terminated the conservatorship as well.

"The thing that's important here, Mrs. Owens now has her ramp, and the court is apprised. We need to get out of her way and let her go live her life," Burton said.

"[I'm] elated and glad it was terminated, there was no need for it. And I think there should be something addressed to keep this from happening to another person and their family and friends," Owens said following the ruling.

Among those in the courtroom were Ownens' three adult children.

"It seems to me it would be pretty simple to find them.," Burton said at one point during the proceedings.

Owens' oldest son, Mischia Smith, said he never received any notice from Adult Protective Services that his mother had been placed under guardianship.

"I talked to my mother, who I talk to on a daily basis, and she informed me. They didn't contact me at all," Smith said. "And I was very surprised by this whole thing. I believe they should be punished for what they do."

Burton also put APS on notice that he wants a meeting with state officials to make sure they are giving family members notice before taking the extreme step of declaring an adult legally incapacitated.

"It does look like there's several things we need to shore up, particularly in terms of making certain notice is provided," Burton said.

Bob Wheaton, Public Information Officer for the Michigan Department of Health and Human Services, which oversees APS, issued this statement last week about investigator Tupper and this case:

"The Michigan Department of Health and Human Services is committed to respecting human dignity and protecting the health, safety and well-being of vulnerable adults. Adult Protective Services takes very seriously its responsibility to protect vulnerable adults. APS follows policies put in place to help understand and respond to each unique situation, and when necessary, works with partners in the court who make the final decision on what's best for these individuals. Adult Protective Services aims to provide the least-restrictive services that are necessary to keep a vulnerable adult safe. The department is looking into the concerns that have been expressed."

This story was originally published by Heather Catallo on WXYZ in Detroit.