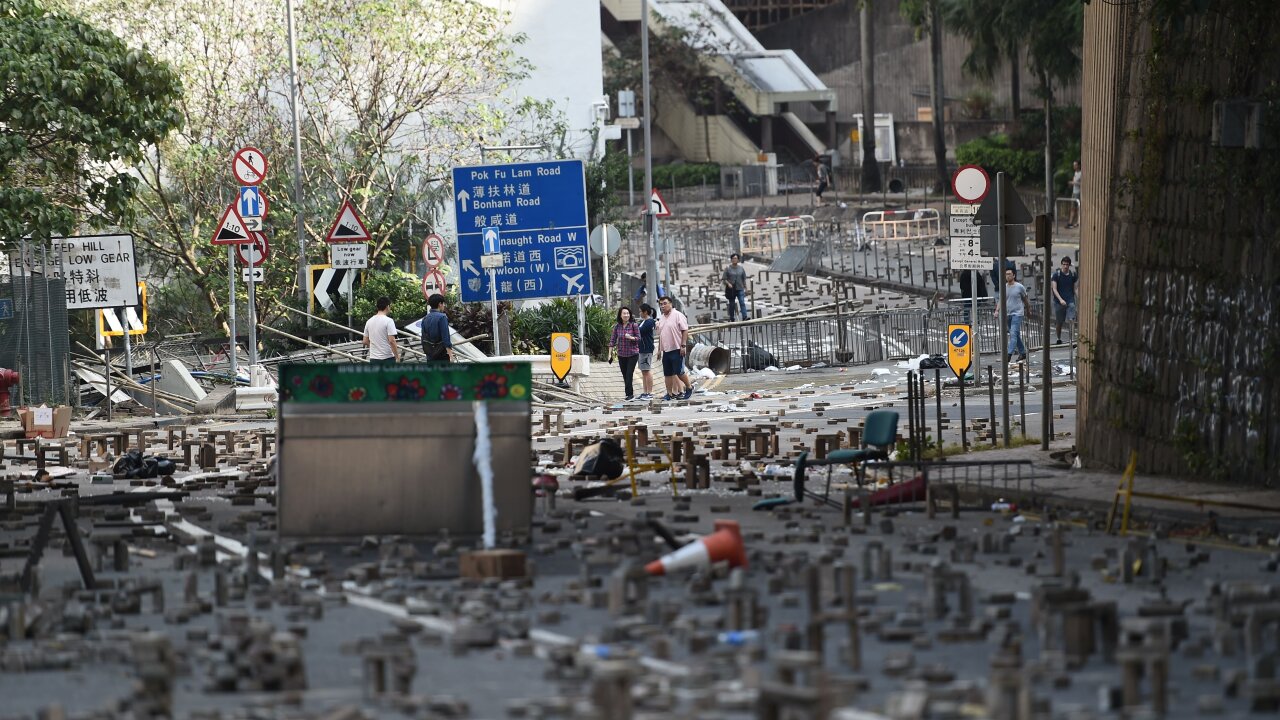 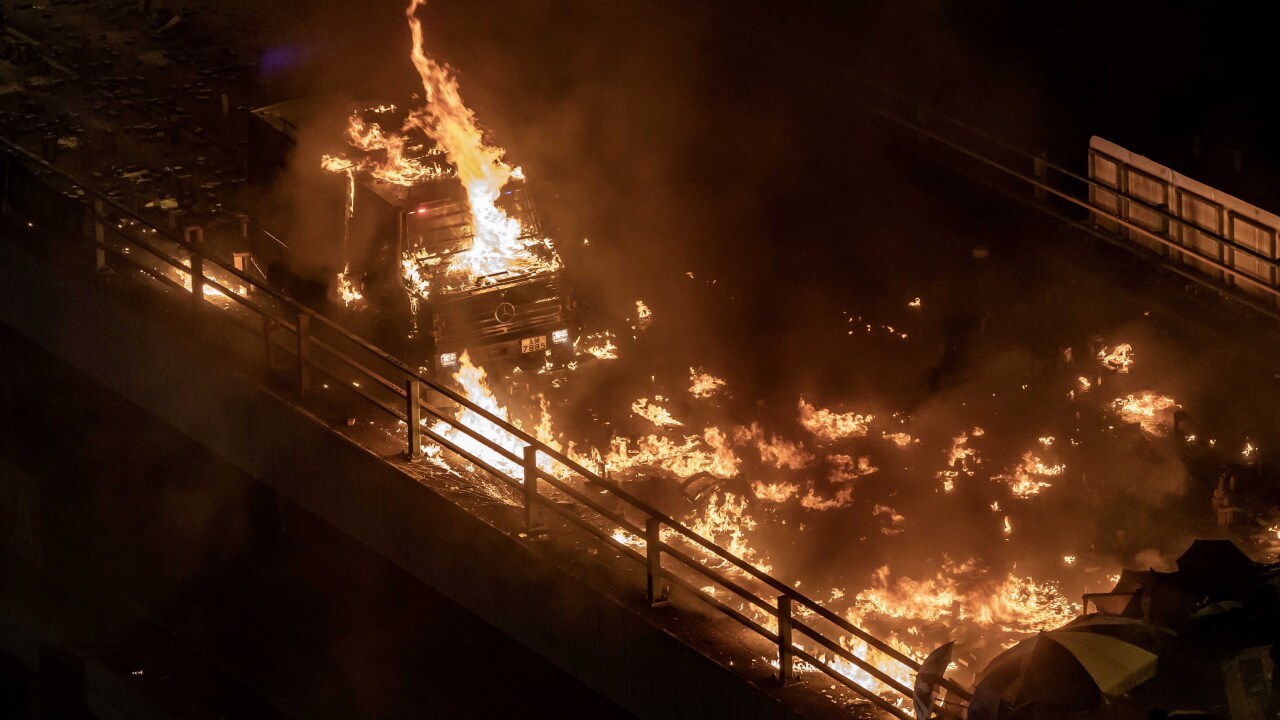 Live images showed police taking control of Cheong Wan Road, the main entrance to the school, but moving back as protesters threw petrol bombs and shot arrows at them from above.

Junctions near the university were blocked by barricades made with trash bags, traffic cones, bricks and other items.

Sunday, a police officer was shot with an arrow during a siege of the fortified campus and police fired water cannons and tear gas at protesters in the streets surrounding the university.

In a new escalation after nearly six months of demonstrations in the fiercely divided city , police warned via Facebook that if protesters continued to use petrol bombs and bows and arrows, they would respond by using minimum force and, given no other choice, live rounds.

Police had told protesters to leave the area and stop all illegal assemblies as they were "planning for the next round of operation."

Hundreds of protesters with bricks, petrol bombs and makeshift barricades had held off riot police on roads surrounding the campus in the city's Hung Hom district, just across Victoria Harbor from Hong Kong Island, for hours.

Unlike other campuses, such as the Chinese University of Hong Kong, the Polytechnic University sits in the center of the city, close to a number of major roads including a cross harbor tunnel.

A large fire broke out on an overpass near the cross harbor tunnel late Sunday. Police said in a statement the fire was started by protesters, "threatening the safety of everyone."

Earlier, the management of Hong Kong Polytechnic University issued a statement saying "dangerous chemicals" had been stolen from laboratories and condemned the protesters' "illegal acts and violence" in the campus which has, they say, "been widely damaged."

"We understand that students care about the current social situation, however, they must be calm and rational when fighting for anything," the statement said. "Resorting to violence or other radical acts will not help solve the problem."

As violence has escalated in recent days, protesters have begun using bows and arrows against the police, and authorities said a media liaison officer was hit in the leg with an arrow during a skirmish Sunday afternoon.

In a fiercely worded statement, the police labeled the group holding the university "rioters," a loaded term in Hong Kong's protests that could result in a heavy prison sentence.

The man who was shot with an arrow is conscious and has been sent to hospital for treatment, according to the police statement.

Hong Kong's Polytechnic University is just one of a number of university campuses being used in the past week as a rallying point for Hong Kong's protest movement.

Polytechnic University is also less than 164 feet (50 meters) from a Chinese People's Liberation Army (PLA) base. So far there has been no sign that the country's military will be used to crack down on protesters.

In a statement Sunday evening, the Hong Kong Professional Teachers' Union and the university's Staff Association said they were "very worried" about the safety of students and bystanders.

"We call on both sides to exercise restraint and avoid the use of deadly weapons. The current stalemate is caused by a series of government decision-making mistakes and should be resolved responsibly," the statement said.

The protests in Hong Kong have now been raging for almost six months after they began in June over a controversial China extradition bill, which sparked huge marches across the city.

When the government suspended but didn't withdraw the bill, the movement's focus quickly expanded to focus on complaints of police brutality and wider calls for democracy.

The protests took a turn in early November after the protest-related death of a 22-year-old student, the first since the demonstrations began. Protesters began to fortify university campuses across the city, holding off police with weapons ranging from bows and arrows and petrol bombs.

Saturday night, police attempted to clear the roads around Polytechnic University but were forced to back down after protesters started fires on the street and threw petrol bombs.

"They showed total disregard for the safety of everyone at scene," police said in a statement Sunday, confirming they tried to disperse the group using tear gas.

Protesters on Sunday were using catapults to launch bricks and other hard objects at police lines from the university's balconies. Their hold on the high ground made it difficult for police vehicles to advance under a hail of bricks and petrol bombs.

"Such attacks pose a grave threat to the safety of police officers, reporters and first aiders at the scene," said police in a statement, accusing protesters of firing petrol bombs and metal balls at their lines.

Sunday, the government announced all schools would be shut again Monday as protests were expected to continue across the city.

A petrol bomb is fired from a rooftop catapult towards police lines at #PolyU pic.twitter.com/ouYydMBAGX

With the both the government and the protesters refusing to back down, there is no immediate end in sight to the Hong Kong demonstrations.

Showing his dissatisfaction with the situation, Chinese President Xi Jinping made rare public comments on the demonstrations Thursday.

He said that "radical" protesters had trampled the city's rule of law and that "stopping the violence and restoring order" was Hong Kong's most "urgent task."

It came just hours before a 70-year-old man, who was struck by a brick during clashes between protesters and their opponents, died of his injuries. Police blamed protesters for throwing the object that killed him.

For the first time since the start of the demonstrations in June, China's People's Liberation Army hit the streets of Hong Kong on Saturday, but only to clear up barricades and debris.

Even that incursion was enough to spur pro-democracy lawmakers in Hong Kong to push for an explanation from the city's government.

Chinese soldiers' efforts to clear roadblocks outside their barracks in Kowloon Tong was "purely a voluntary community activity initiated by themselves," the Hong Kong special administrative region government said in a statement to CNN.