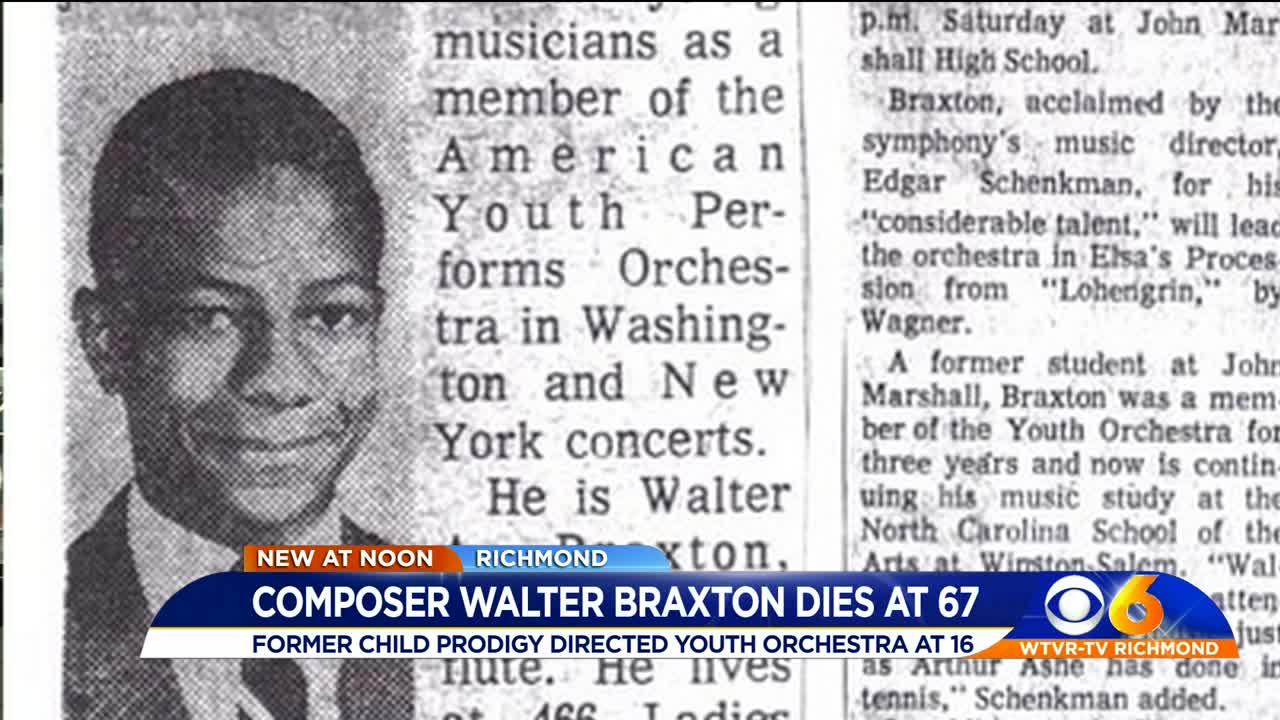 RICHMOND, Va. -- To Walter Braxton, life was like a classical sonata. A multi-part journey filled with drama and excitement, highs and lows, that would often build to a grand finale.

One of Richmond's most fascinating composers, Braxton died last Monday.

Former CBS 6 reporter Mark Holmberg said Braxton fought a long battle with throat cancer. He was recently hospitalized in poor health and is believed to have contracted COVID-19 a short time later, according to a family friend. CBS 6 has not confirmed the cause of death.

Braxton became somewhat of a local celebrity in the 1960s, beginning when he was just in middle school. Several newspaper articles were published about the child prodigy, and his musical talents.

When he was just 16, Braxton was chosen to direct the Richmond Symphony Youth Orchestra. He was heavily recruited, and long before graduating high school he received a scholarship to the University of North Carolina School of the Arts, then and now one of the premier conservatories in the country.

But like so many artistic geniuses, Braxton battled mental illness for most of his life.

He suffered his first nervous breakdown when he was 18, telling Holmberg in 2016 that the pressure of being a young black composer in a very white world took its toll. The death of his father also affected him greatly.

Braxton's psychological issues derailed his professional career for decades, though writing music often seemed to provide the balance and structure he needed.

In recent years, Braxton would spend hours composing inside the Starbucks coffee shop in the 1500 block of West Broad Street.

Sitting at a window table, Braxton came up with four symphonies and a symphonic ballet. It also inspired him to record a CD of one of his sonatas for violin and organ.

By chance, that coffee shop is also where he would meet the future artistic director of Richmond's Firehouse Theater.

"Before I even moved down here to take this job, I was hanging out at Starbucks waiting for a meeting and I was sitting next to this guy," Joel Bassin said in 2018.

"It was Walter. I introduced myself. He was hand-notating music, and he said, 'You know, I got this opera.'"

Three years later, that opera, 'To Damascus,' premiered at the Firehouse Theater. Braxton was in the front row, watching as years of hard work came to life on the stage.

"It's pretty amazing," Braxton told CBS 6 on the night of the premiere. "I've been using the word 'unbelievable' all day long, that was one of my mother's pet words when it came to my musical career."

It turned out to be a fitting swan song for one of Richmond's truly remarkable talents.