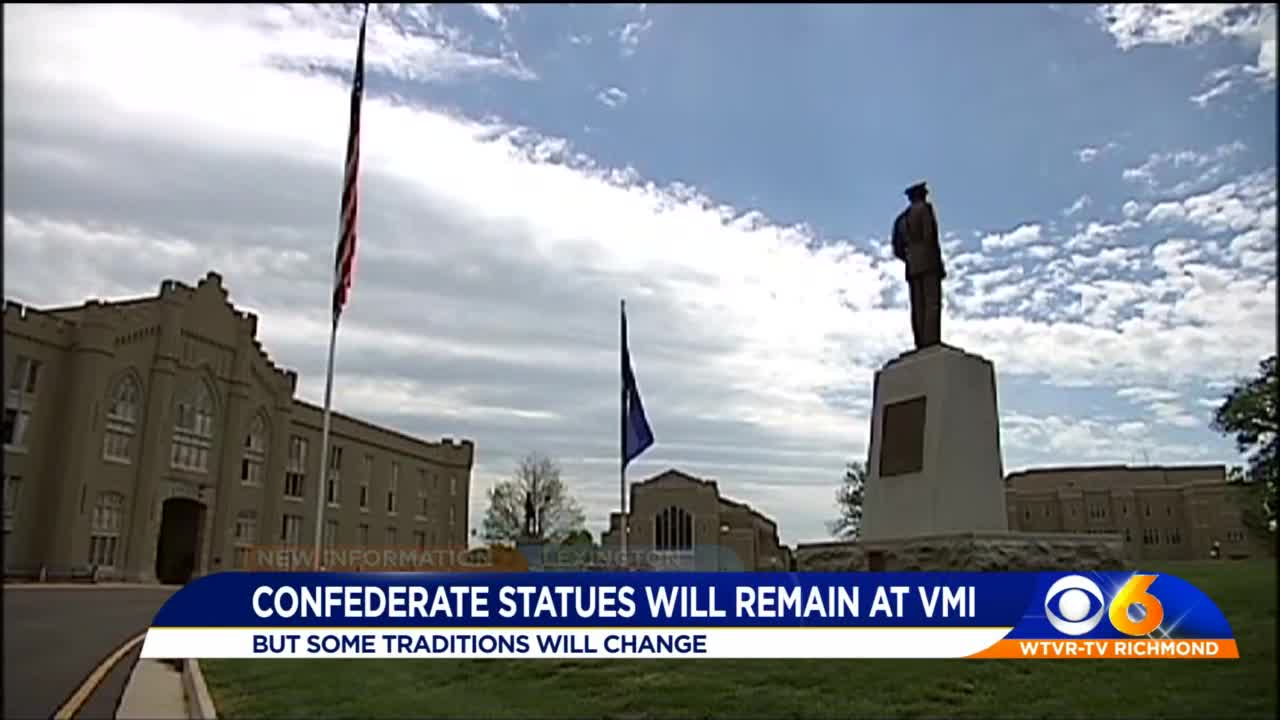 The superintendent of the Virginia Military Institute said it will not take down its Confederate monuments.

LEXINGTON, Va. — The superintendent of the Virginia Military Institute said it will not take down its Confederate monuments.

But the military college in Lexington said it will change some of its longstanding traditions.

The Roanoke Times reports that retired Army Gen. J.H. Binford Peay III wrote about the Confederate monument issue in a letter to the VMI community on Wednesday.

"We are living in a unique time in the history of our country that has undoubtedly affected each of us in different ways. First and foremost, I believe we all agree we want to erase any hint of racism at VMI, in our communities, and in our country. It is also very clear that the VMI community consists of passionate individuals with deeply held beliefs," he wrote. "We have spent considerable waking hours trying to make sense of the turmoil and pain we have seen nationally. Many of you across the spectrum of our graduates have personally contacted me and expressed how this affects the operations of VMI today and concerns for the future. For weeks, I have listened carefully and contemplated your correspondence and will continue to do so. Some of our African American cadets and alumni have expressed that parts of the VMI experience did not live up to the standards that it should have, and I am committed to addressing and fixing any areas of racial inequality at our school."

Multiple buildings are named for Confederate Gen. Thomas “Stonewall” Jackson as well as other alumni and faculty who fought for the Confederacy.

A statue of Jackson stands in front of the barracks.

"Our school’s history has been intertwined with the history of Virginia and the Civil War. Unlike many communities who are grappling with icons of the past, VMI has direct ties to many of the historical figures that are the subject of the current unrest. Stonewall Jackson was a professor at VMI, a West Point graduate who served in combat in the Mexican War, a military genius, a staunch Christian, and yes, a Confederate General," he wrote. "Throughout the years, the primary focus on honoring VMI’s history has been to celebrate principles of honor, integrity, character, courage, service, and selflessness of those associated with the Institute. It is not to in anyway condone racism, much less slavery."

Peay said changes will include reorienting flagpoles surrounding the Jackson statue and centering them at new barracks.

VMI also will have classes in diversity training.