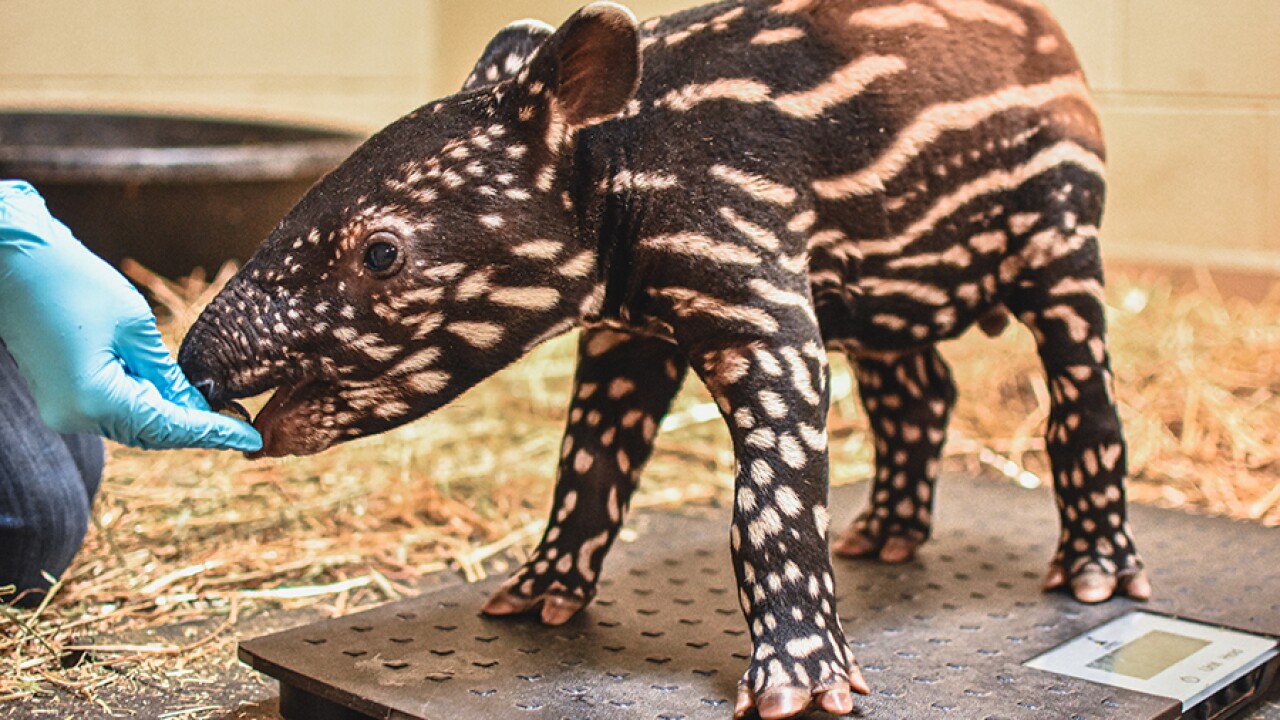 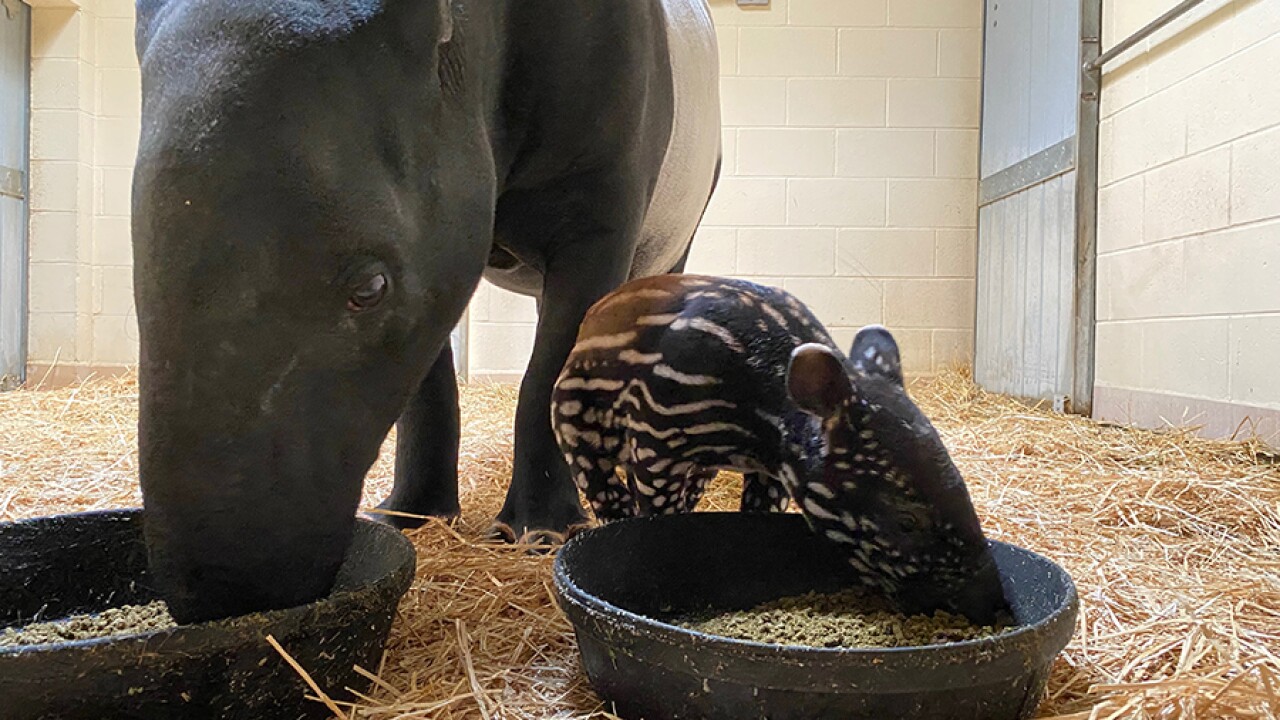 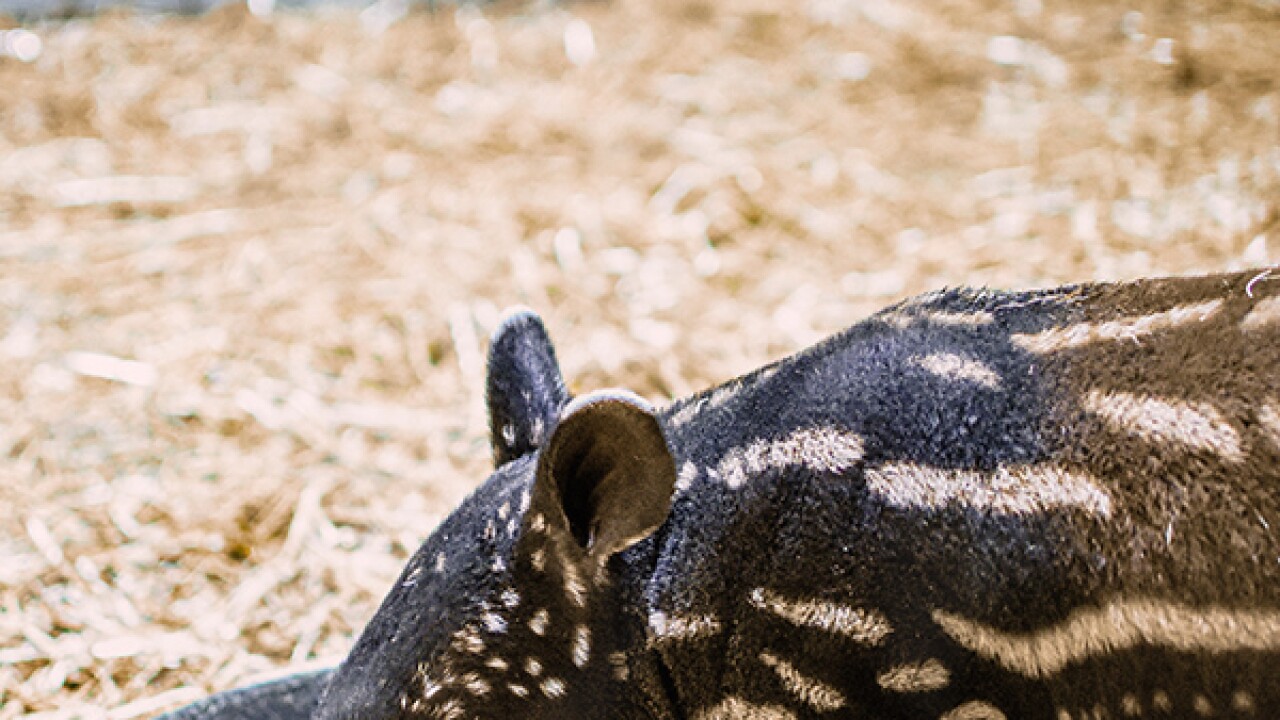 NORFOLK, Va. - The Virginia Zoo has welcomed its first-ever Malayan tapir baby who was born shortly after 8 p.m. on January 20.

The male calf was named Luther by his zookeepers for the holiday he was born on – Martin Luther King, Jr. Day.

Luther is the first offspring for parents Haddie, age 9 and Rosco, age 5, who were brought together in 2017 as part of a breeding recommendation from the Malayan tapir Species Survival Planä through the Association of Zoos and Aquariums.

Upon his first weigh-in, the Zoo says Luther was a little over 15 pounds. Keepers have observed the calf nursing well, vocalizing and interacting with mom, and exploring his dens. Staff have also introduced a small, shallow pool of warm water for the calf to get used to in preparation for being around larger pools, as tapirs are great swimmers. He now weighs 44 pounds and still regularly nurses from mom, in addition to eating small amounts of banana and other produce, grain, hay and alfalfa.

Malayan tapirs, which the Zoo says look like a cross between an elephant and pig, are a unique species closely related to rhinos and horses that can be found in moist grasslands and tropical rainforests in Malaysia, Indonesia and Thailand. In the wild, a calf’s coloration would help them blend into their surroundings to avoid becoming prey, but their pattern changes to the signature black and white or gray coats as they mature into adults.

According to the zoo, Malayan tapirs grow to be between 5 feet 11 inches. and 8 feet 2 inches, and weigh between 550 and 710 pounds. They are an endangered species, with approximately 2,500 individuals left in the wild, primarily due to large scale deforestation and an increase in hunting.

“The staff and I are excited to welcome Luther as a new ambassador to his endangered species,” said Greg Bockheim, Executive Director of the Virginia Zoo. “Few of this species are maintained in human care so his contribution to the genetic pool is important to saving these incredibly unique creatures, known locally as the Giant panda of Southeast Asia. As Asian myth says, all other creatures were created and the remaining parts went into to making the Malayan tapir."

Luther and Haddie will remain behind the scenes while they continue to bond and until it is consistently warm enough for the calf to be on exhibit outside. An auction for the first behind-the-scenes tour with mom and the new baby will take place next month, donating all proceeds to tapir conservation.

Zoo fans can symbolically adopt Luther in a Zoodoption special for just $50. Click this link for details.