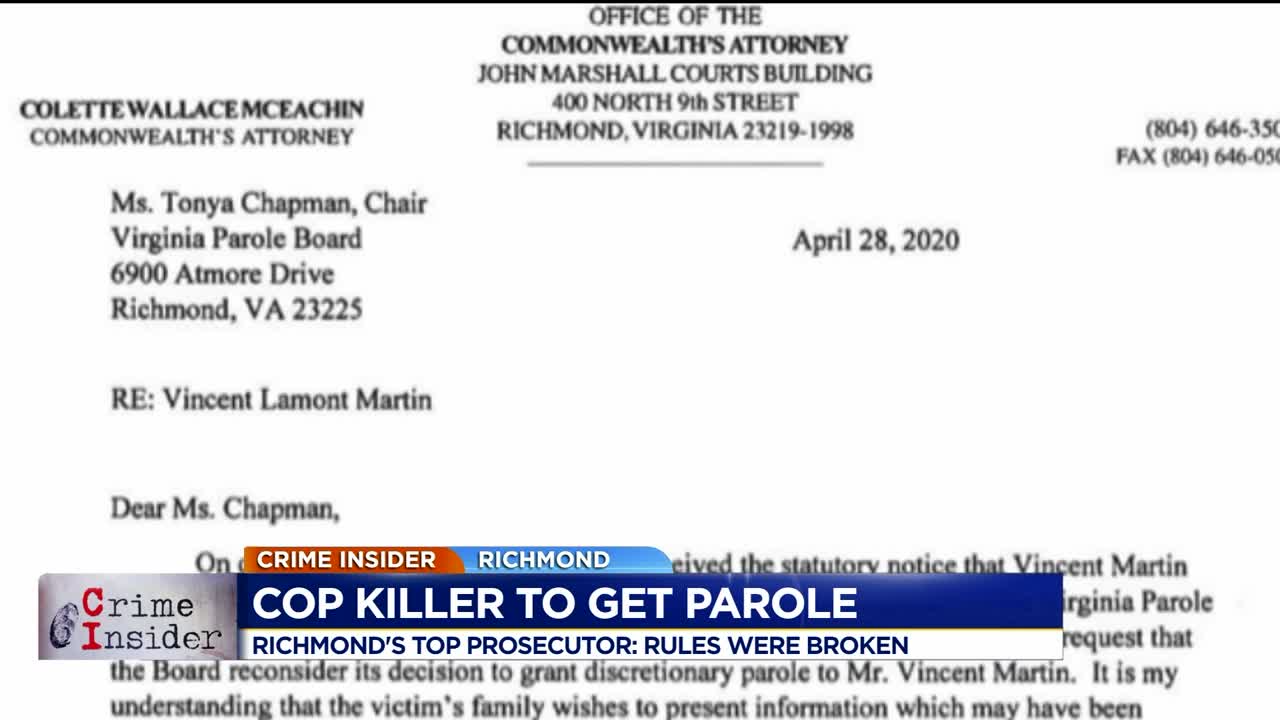 RICHMOND, Va. -- Richmond's top prosecutor said she stands behind the letter she wrote to the state parole board, asking them to reconsider the release of a man who killed a Richmond cop and is now being let out on parole despite aninitial life sentence.

Vincent Martin was supposed to serve a life term for killing Richmond Police Officer Michael Connors in 1979. But now at 64 years old, he will walk free from a Nottoway County prison.

Connors family has appealed the decision, and Richmond's top prosecutor agrees and has asked the parole board to repeal the decision.

Officials say that because of COVID-19, the process behind Connors parole being granted is not typical.

"One of the aspects of the case is the Connors family was not able to have a personal interview with the board, and that wasn't being done because of the COVID-19 crisis,” said Secretary of Public Safety Brian Moran. “I wish that could have been done so they could have explained the emotional aspect in person rather than over the phone."

Since the board voted to release Martin on Good Friday, there has been a feverish letter-writing campaign from top law enforcement officials all over the state. He is now set to be released on May 11.

The city's top prosecutor requested the state parole board to reconsider their decision, citing a 21-day rule that she says was not followed.

"I have great respect for Colette McEachin and we will review the letter,” said Moran. “Our thoughts go out to the Connors family because they're rehashing this tragedy forty years later of the death of their brother and son."

Originally, Martin was due to walk free on April 30, but cases signed off by former state parole board chair now judge Adrianne Bennett have been under the microscope.

"Once the board made that decision and certified it for parole, whether we can revisit, we have not found the ability to do that," said Moran.

Crime Insider sources say that once released, Martin will reside with family in the West End.