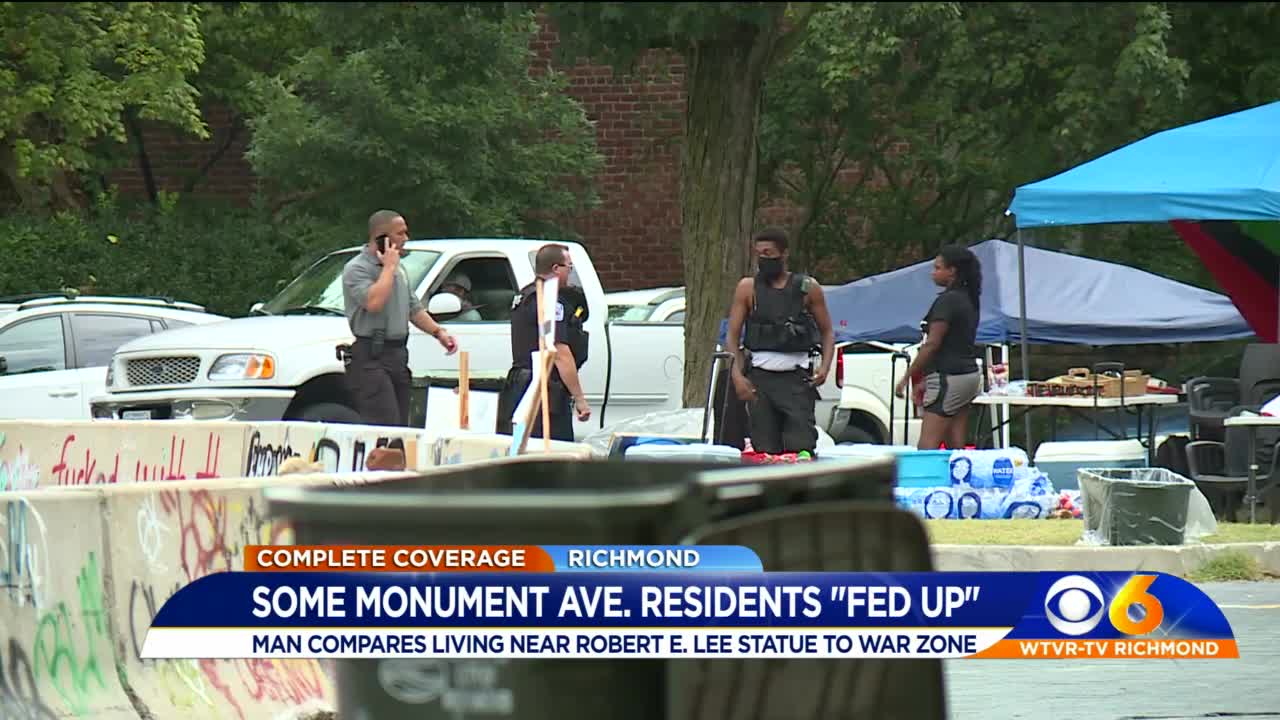 RICHMOND, Va. -- One day after Richmond Police cleared the area around the Robert E. Lee monument of tents and campers, officers were back patrolling the area on Friday.

Officers made the rounds again Friday morning, telling people with tents and supplies to leave the area around the Lee statue.

Some neighbors who live near on Monument Avenue called the crackdown on campers a relief. They say they're dealing with people sleeping on their lawns, stealing electricity to power smartphones, and committing other crimes.

"Last night, after the gunfight, we said 'no,' until this is done, no one is sleeping at the front of the house, because a stray bullet, right? That'd be awful. And we've seen that happen before," one Monument Avenue neighbor, who asked his identity be protected, said. "My relative that has lived in a war zone said, "Hey look, yes, this is exactly what it feels like in the Middle East in the midst of a war zone."

The Black Lives Matter movement, he claimed, has been hijacked by those only interested in mayhem.

"They're sleeping with Glocks in their hands," he said. "You go by there, they're laying on the ground asleep with a Glock in their hand., AR-15 on their shoulder, bulletproof vest. I'm sorry. Why is that needed?"

Richmond Police said over the past 30 days, they've responded to nearly 150 calls for service at the Lee statue.

That's partly the reason why they're making their rounds, telling those who set up camp to move along.

Ryshawn Richardson, who said he does not protest at night, said as he doesn't agree with police tactics on moving campers.

"This is a safe place. This is a circle where people come to protest, voice their opinions. All in the hopes of change," he said. "I understand that people see all these protesters with guns and carrying out their First and Second Amendment to protest and protest armed, but they do it out of respect that they know that the police have an open right to harm them."

Crime Insider sources indicated that over the weekend, police would continue efforts to clear people away from the area around the Lee statue.