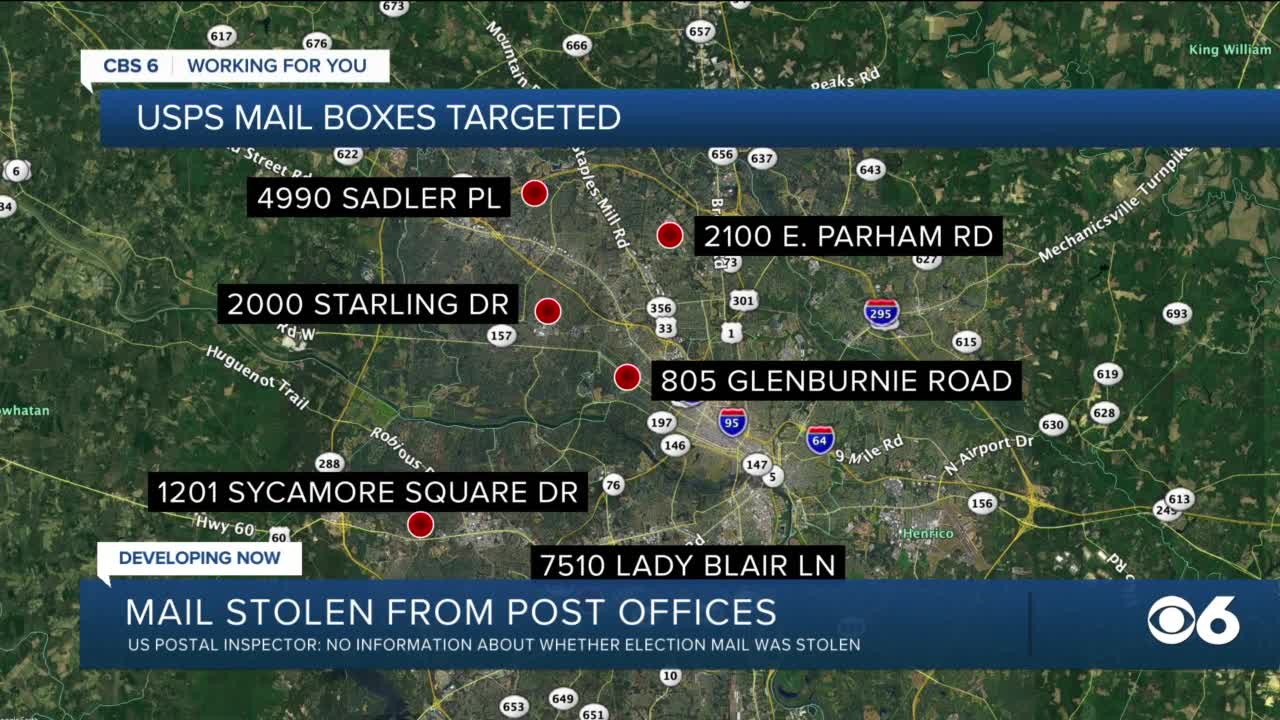 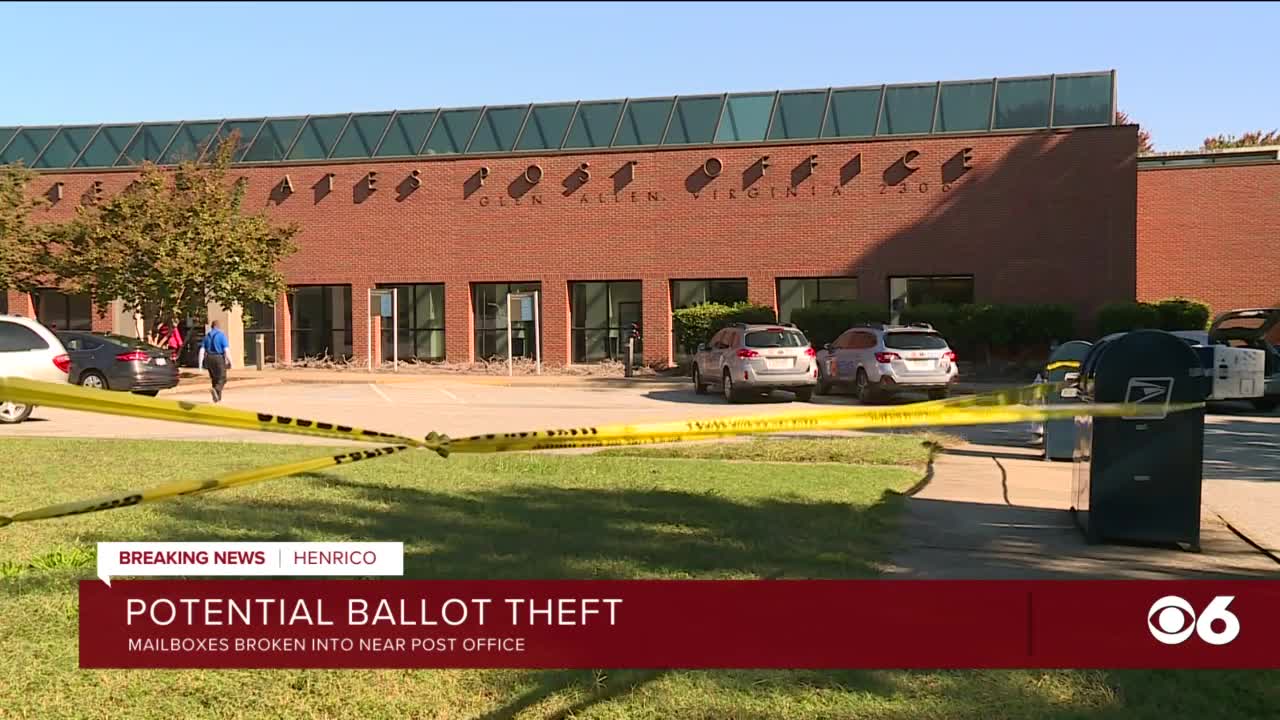 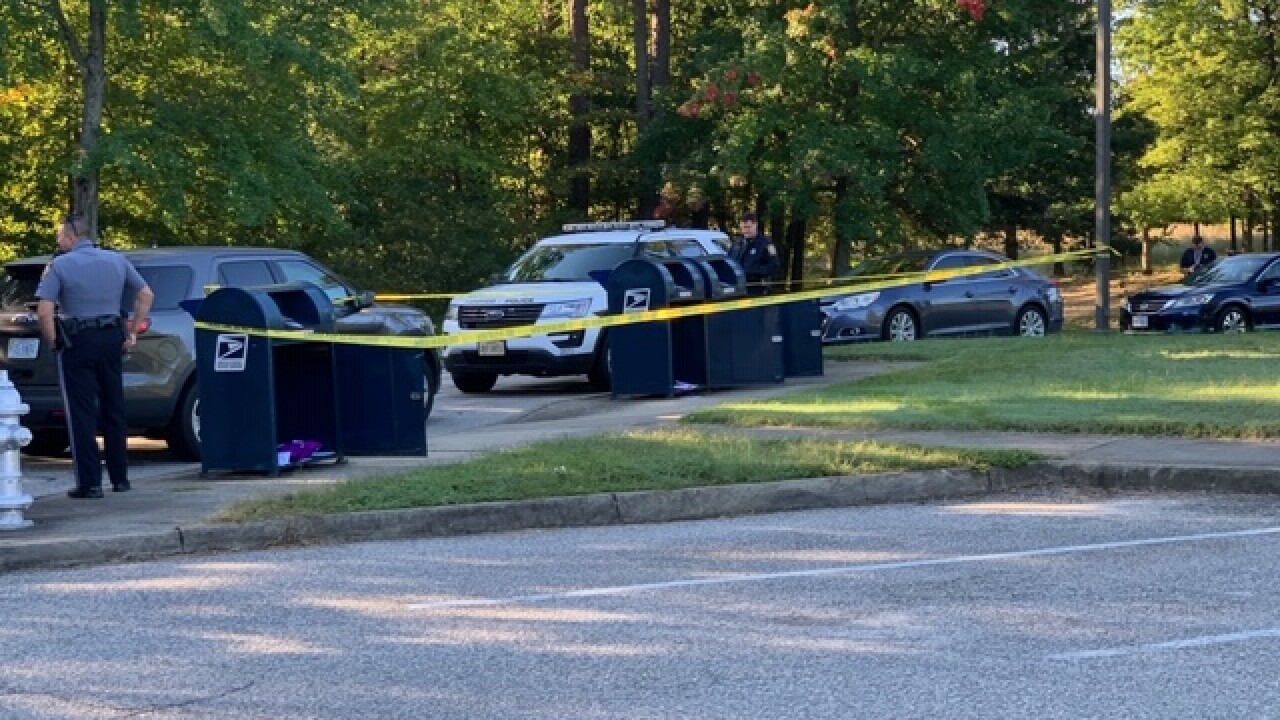 GLEN ALLEN, Va. -- The United States Postal Inspection Service and police are investigating after someone pried open and stole mail from post office mailboxes in multiple locations around Central Virginia, according to police and the U.S. Postal Service.

"We received calls from several post offices that our blue boxes, located at the post offices, had been tampered with," United States Postal Inspector Michael Romano said. "It appears that we've had some level of mail stolen from these blue collection boxes."

Romano said most post office thefts were crimes of opportunity where criminals sought some sort of personal gain.

The timing of these thefts, as thousands of Virginia voters mail-in absentee ballots ahead of the November election, was part of the on-going investigation.

"I don't have any information. Whether the boxes contain any sort of election mail," he said. "If we have any indication that it is, sort of, election fraud related, we are going to work closely with our counterparts at the Federal Bureau of Investigation to determine what type of theft we have and aggressively investigate this case."

The Virginia Department of Elections say they have been made aware of the mailbox break-ins.

"At this time, the United States Postal Service is investigating. Neither the Department nor USPS has any information about whether any election mail was contained in the boxes," a spokesperson added.

Romano urged anyone who used the mailboxes in question, between 3 p.m. Saturday and 7 a.m. Monday, to contact the United States Postal Inspection Service 1-877-876-2455.

Mary Anne Pugh pulled up to the Sadler Place post office to find the blue collection boxes out of order.

“I read it as another way to get voter suppression. It may not be their motive, but it certainly was the first thing that came to my mind,” Pugh explained. “It’s very concerning to me because I think the post office is something we’ve always trusted. It’s something named in the constitution.”

Pugh said a postal worker told her the mailboxes were pried open possibly using a crowbar.

Henrico Commonwealth’s Attorney Shannon Taylor said in a statement that she would not tolerate tampering with mail or attempts to interfere with the election.

"With a month before a critical election, some people are choosing to vote by mail and they must be able to know their vote is safe, will not be tampered with and will arrive in a timely fashion to their local registrar,” she wrote. "I would just remind voters who are concerned about the whereabouts of their ballots that they can track them at the Virginia Department of Elections.”

Inspector Romano insisted the U.S. Postal Service continued to be a safe method to mail ballots and other important items.

"Mail theft is relatively low. It's just important people realize that we do have a security force that polices the postal service to make sure that everyone's mail gets there safely and securely," he said. "The most secure way of mailing something to us is to get it in the hands of the mail stream as quickly as possible. I would recommend individuals mailing something inside the post office, our lobbies are traditionally open. If your carrier comes to your workplace or to your door, if you can, hand it to them directly."

Theft of U.S. mail is a federal offense punishable by up to five years in prison for each count.

Mail-in ballots must be postmarked by Tuesday, November 3, or can be dropped off in person at the local registrar's office.

Voters can also vote in person at the community polling location on Election Day, November 3.