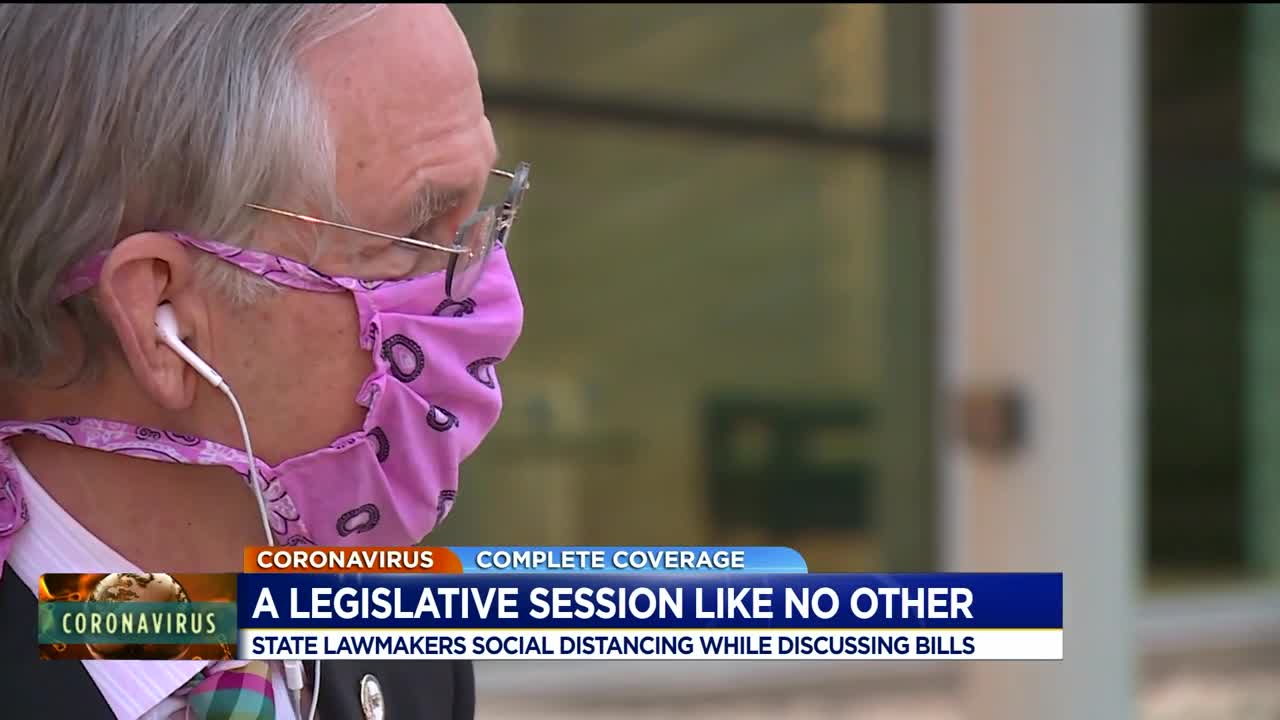 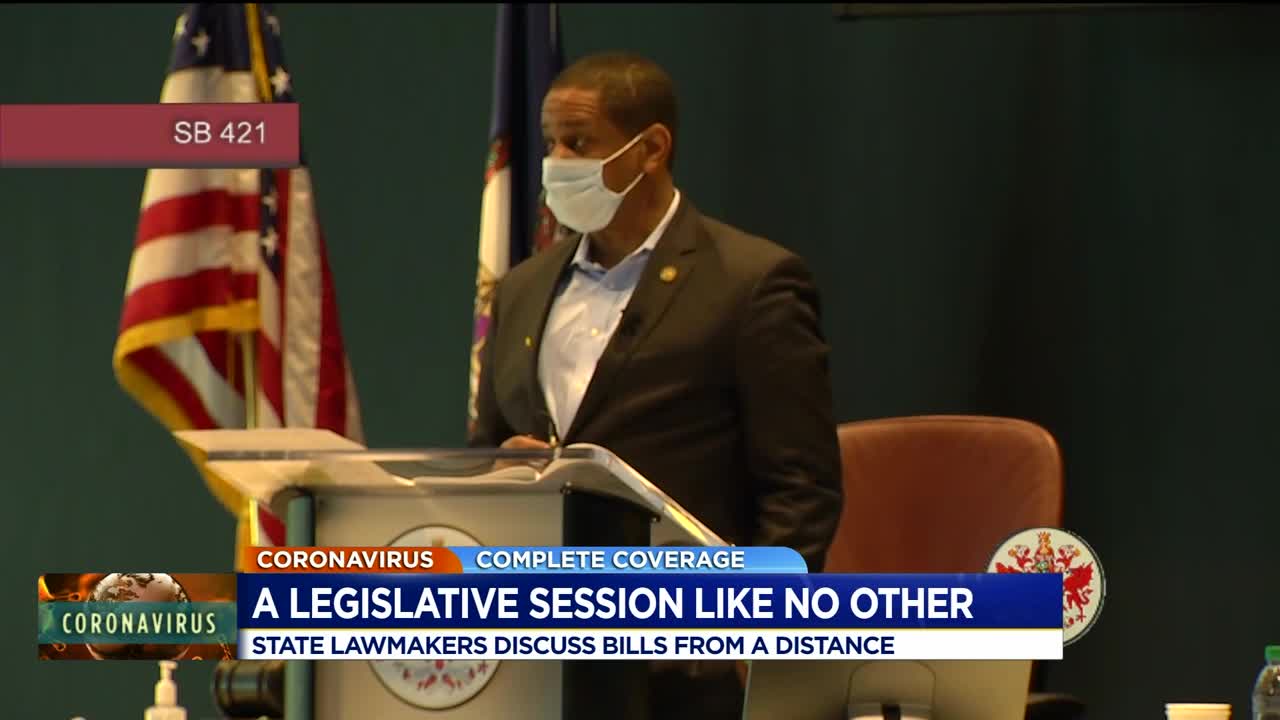 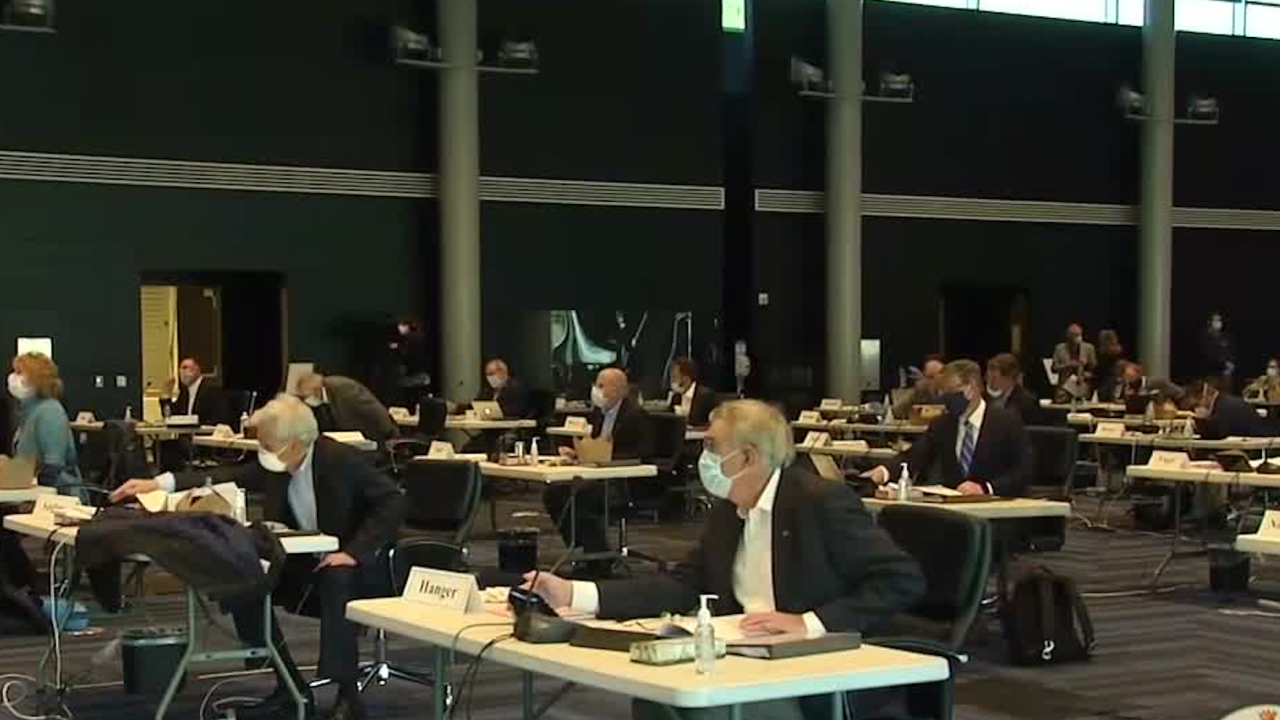 RICHMOND, Va. -- A Virginia Senator sat inside a Plexiglas “box”, the House Speaker appeared to faint at one point, and technical difficulties initially staled proceedings in one chamber.

The usually matter-of-fact Virginia General Assembly “veto session” was anything but because of COVID-19.

Gov. Ralph Northam amended 102 bills passed by state lawmakers during the 2020 General Assembly session. Many of the alterations were technical in nature, but several attention grabbing pieces of legislation were debated by lawmakers practicing social distancing because of the coronavirus pandemic.

The Virginia Senate held their session at the Dewey Gottwald Center at the Science Museum of Virginia. Senate Clerk Susan Schaar said the last time the full body met outside of the State Capitol was likely during the cholera epidemic in the mid-1800’s.

Northern Virginia Senator George Barker (D) debated and voted on amendments from behind a Plexiglas barrier, and every Senator was provided a mask, if they did not have one already, and gloves. Procedures for the session, like limiting printed papers distributed among lawmakers, were developed in consultation with the Virginia Department of Health, Schaar said.

The House of Delegates meanwhile met on the Capitol grounds, but outside in a large tent. The first roll-call vote of the day was delayed by 40-50 minutes after more than 40 electronic machines did not work properly. Staff member eventually rectified the situation.

House Speaker Eileen Filler-Corn (D-Fairfax) pushed for a resolution allowing the House to vote electronically from remote locations, but it failed to gain enough votes in the entire chamber.

“We have no assurance that when we go home or to our office that we’re going to be able to do our jobs, and that if there is a technical problem that it is going to be resolved,” said House Minority Leader Todd Gilbert (R-Shenandoah) before the vote.

The economic fallout from COVID-19 business closures resulted in amendments by Northam on several bills passed by Democrats focusing on workers.

The Governor’s Office amended a bill increasing the minimum wage in Virginia and allowing collective bargaining for public sector employees. The amendments delayed the implementation of both bills until May 2021, instead of next January under the original versions.

Once signed by Northam, the minimum wage in Virginia would increase to$9.50 per hour starting next year and incrementally after that until it reaches $15 per hour in 2026.

Republicans said given the losses small businesses are already seeing because of the COVID-19, a minimum wage hike would only dig a deeper hole. They said a four month implementation delay was not long enough for businesses to see the full picture of how the virus will impact their operations.

“Instead of being sympathetic to these businesses in their worst time, we’re tightening the screws,” said Sen. Bill DeSteph (R-Virginia Beach). He said he believes the increase means even more restaurants and small businesses will be forced to close in the near future.

Democrats said “essential workers,” many of whom make at or near the current minimum wage of $7.25 per hour, have proven they are long overdue for a pay raise.

“The American economy is 70 percent driven by consumer spending, and the people who are likely to spend are not buying new cars or people with lots of money or business owners. It’s people at the bottom of the economy,” said Sen. Scott Surovell (D-Fairfax).

The General Assembly signed off on Northam’s recommendations to create a COVID-19 relief fund through taxing the distributors of “games of skill,” which have shown up in bars and truck stops throughout Virginia. The original bill would have banned them statewide, but the amendments allow the machines to remain for one year in order to generate $150 million for the relief fund, according to the Governors office.

Both chambers also approved an emergency clause on legislation capping the amount and type of late fee landlords can charge tenants who miss rent payments. Del. Jeff Bourne (D-Richmond) said passing an emergency clause, which puts the law into effect as soon as Northam signs it, is even more critical during the pandemic.

Beyond Coronavirus impacts, the General Assembly voted on amendments to several high profile pieces of legislation, one of which sends the issue of marijuana decriminalization back to Northam for action.

Bills decriminalizing simple possession of less than one ounce of marijuana cleared both chambers, but the Governors Office made several amendments. State lawmakers accepted a majority of them, but rejected one that would have eliminated a defendants right to trial by jury if their conviction was appealed to circuit court.

Republicans and Democrats in both chambers objected to the amendment because of constitutional concerns. Northam will now decide whether to veto the bill or sign it into law without the rejected amendments.

Other amended bill passed by both the House and Senate:

You can read a full summary of the Governor’s amendments here.