'KKK President' arrested for hitting protester with his truck

A hate crime investigation is underway. 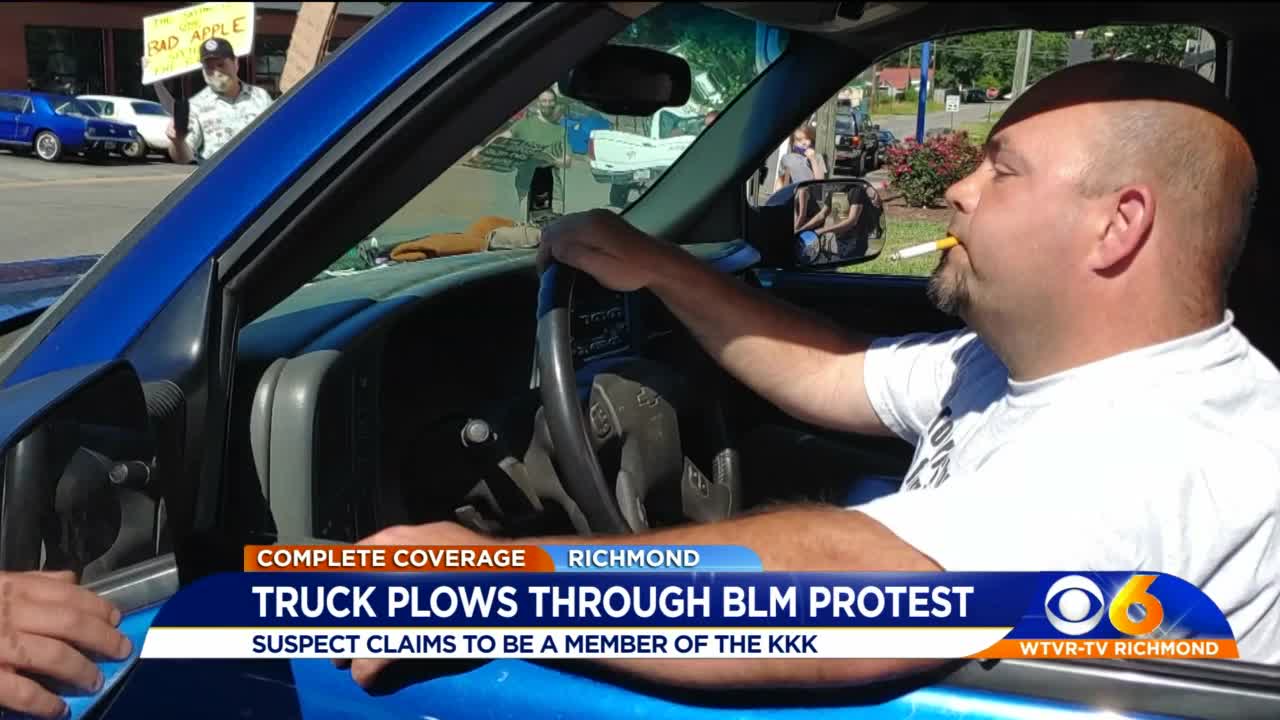 'KKK President' arrested for hitting protester with his truck 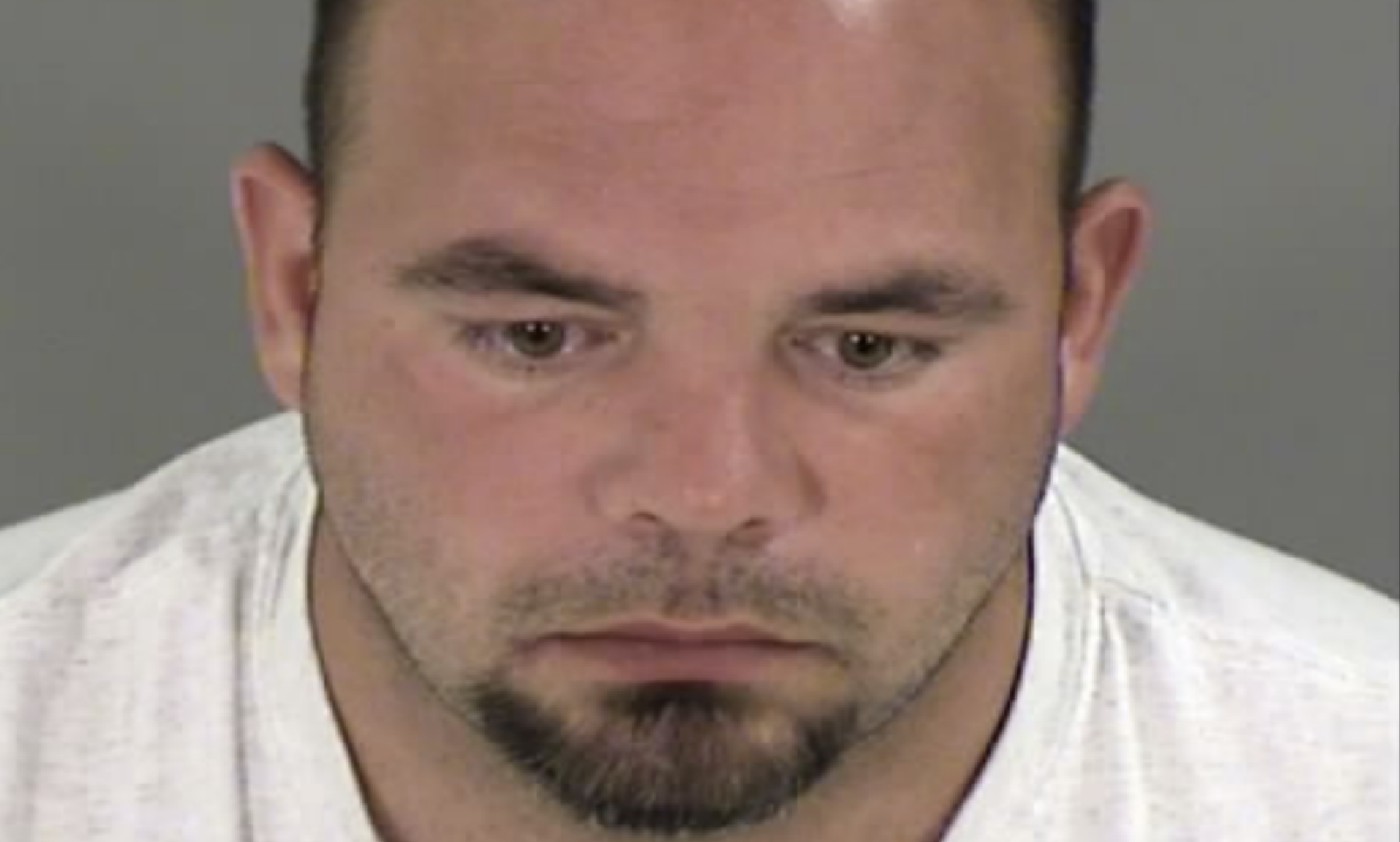 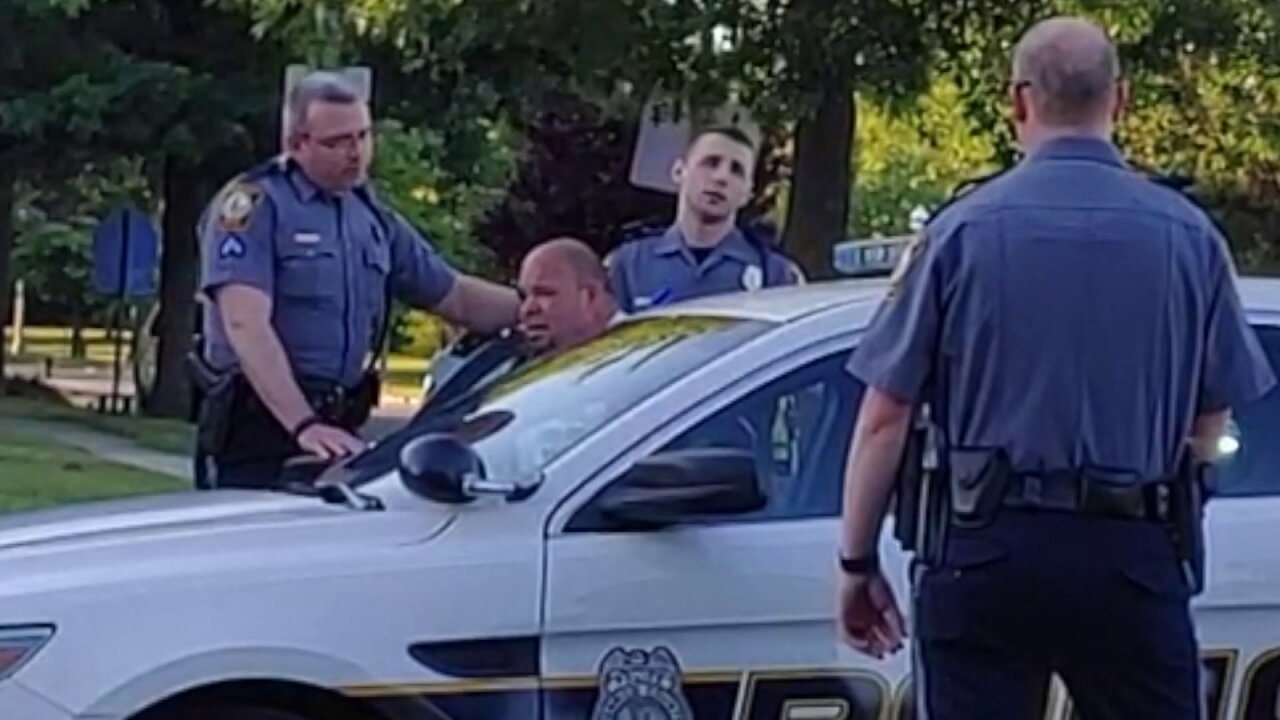 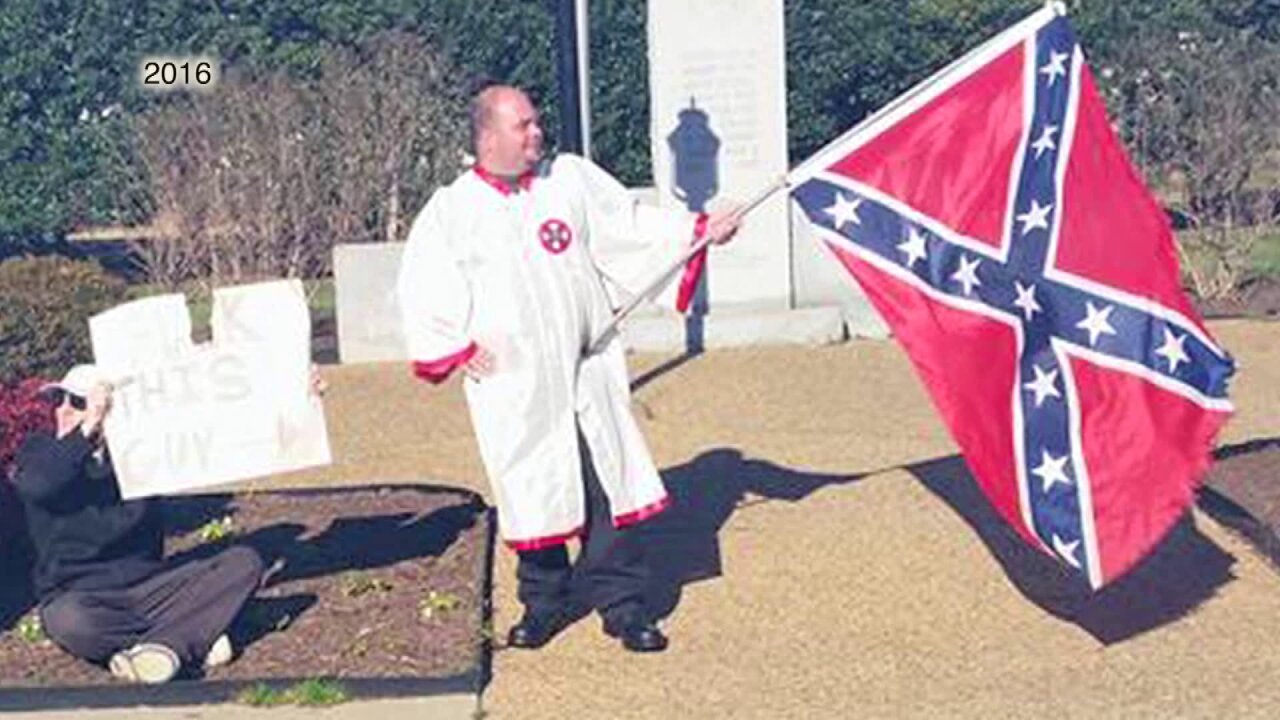 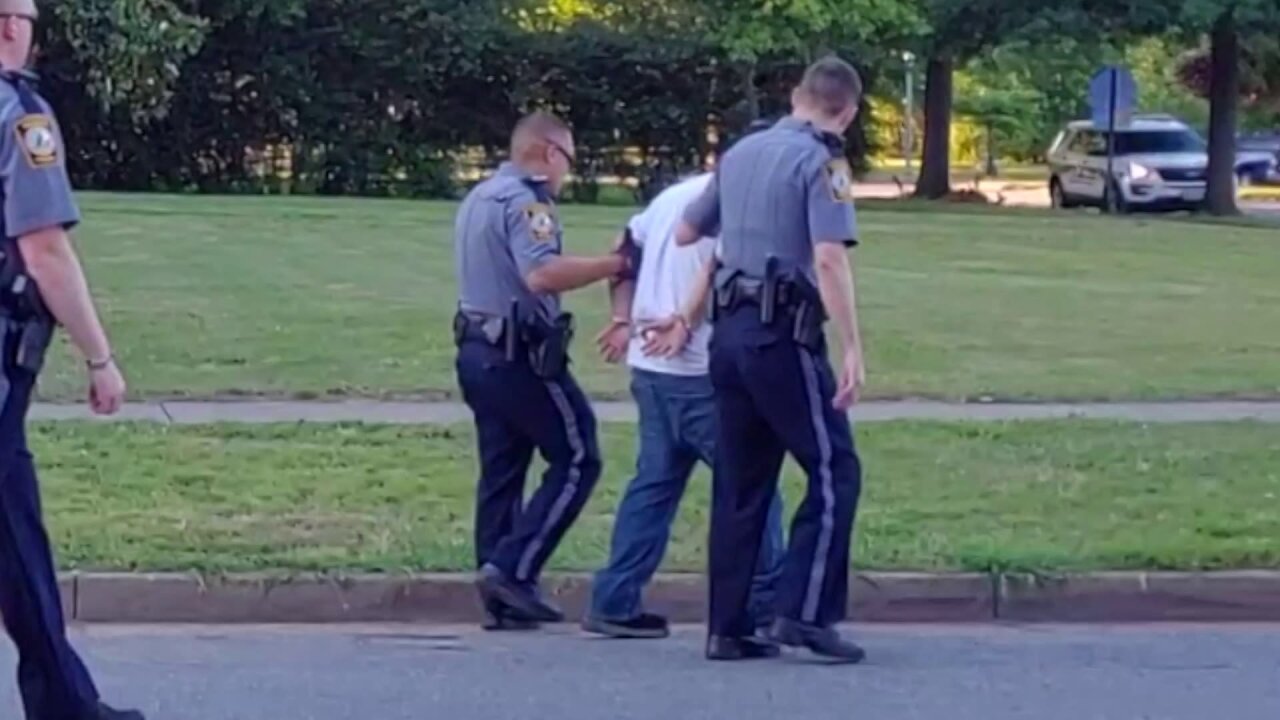 HENRICO COUNTY, Va. -- The Henrico Commonwealth's Attorney said a hate crime investigation was underway against the self-proclaimed president of the Virginia KKK.

Harry Rogers appeared in Henrico Court Monday morning where he agreed to receive a court-appointed attorney.

Rogers, 36, of Hanover, was formally charged with attempted malicious wounding (felony), destruction of property (felony), and assault and battery (misdemeanor) after police said he drove his pickup truck into a group of protesters Sunday in Lakeside.

The destruction of property charged stemmed from a bicycle damaged during the ordeal.

“Several witnesses reported that a vehicle revved their engine and drove through the protesters occupying the roadway,” a Henrico Police spokesperson said of the incident on Lakeside Avenue near Vale Street.

No one was seriously injured physically.

The person who called police was checked by rescue at the scene and refused further treatment.

The protest was part of the Black Lives Matter marches that have taken place around Virginia and the nation following the Memorial Day death of George Floyd.

In court Monday, the Henrico Commonwealth’s Attorney said Rogers told arresting officers he was the president of the Ku Klux Klan in Virginia and the highest-ranking member not imprisoned.

“The accused, by his own admission and by a cursory glance at social media, is an admitted leader of the Ku Klux Klan and a propagandist for Confederate ideology,” Henrico County Commonwealth’s Attorney Shannon Taylor said in a statement released after court. “We are investigating whether hate crimes charges are appropriate.”

In a jailhouse interview with CBS 6 assignment manager Robert Hughes, Rogers admitted he had ties to the KKK, but denied telling police he was the president and questioned his arrest.

He stated he revved his engine and drove on the median to escape the protest.

"We will prosecute to the fullest extent of the law,” she said. “We lived through this in Virginia in Charlottesville in 2017. I promise Henricoans that this egregious criminal act will not go unpunished. Hate has no place here under my watch.”

Rogers is due back in court in August.

CBS 6 first spoke to Rogers in 2013 as the Virginia Flaggers prepared to raise a large Confederate flag outside of his Chester home along I-95.

Rogers and his girlfriend appeared in a subsequent CBS 6 report when the couple's landlord evicted them from their home following their appearance on the station.

In 2016, the Progress-Index identified Rogers as the man holding a Confederate flag while wearing a Ku Klux Klan robe while standing in front of the Colonial Heights War Memorial on the Boulevard.

He told the paper he was the organizer of the National Association for Awakening Confederate Patriots and was there to exercise his first amendment right.

Protesters are sharing accounts of the incident in the Lakeside community on Sunday.

The organizer of the protest, who did not want to be identified, said the group assembled at Bryan Park to walk up Lakeside Avenue.

"This was a small gathering of 200-300 people many of whom brought their children or were elderly. Many of those in the back of the group were with their children or elderly," the organizer said in a statement. "I witnessed him cut around drivers who were waiting behind the protest as he drove on the median so he could get closer to the protesters."

Eva Swanson said she watched as the truck drove onto the median and into the protesters.

“[The driver] revved his engine and sped up and I thought for sure people were going to die. People were screaming,” Swanson said. “I don’t know if we were in range of him hitting us, but we were afraid for our lives and fled out of the way.”

Swanson lives north of the city and felt it was important to join the protesters. She feared that someone would drive into the crowds.

“I want to be clear though, the fear I had as a white person marching is nothing compared to the fear of violence black people face every single day,” Swanson explained.

Rachel Kurtz stated she and her family were walking towards the back of the protesters when they jumped out of the truck's path.

“I heard the engine rev up real loud behind us and it sounded as if it was coming in quickly so I shouted to my husband and son to get up on the sidewalk quick. Sure enough it came right up beside us quickly and seemed like it was trying to hit the crowd,” Kurtz explained.

Bicyclists then shouted at the driver to stop.

“He kept revving his engine inching forward like he was trying to hit the people in front of him,” Kurtz recalled. “The plan was to go to the [AP Hill] statue and meet up with another group and have a moment of silence. He was there already parked before the group got there. He was there waiting.”

Another witness, who did not want to be identified, said the pickup truck driver turned around.

Video of the arrest given to CBS 6 by the protest organizer showed three officers leading Rogers in handcuffs to a cruiser while the protesters cheered.

Police sat Rogers in the front seat, which some questioned.

However, Henrico Police responded to the criticism on their Twitter page on Monday.

Cages are not installed in the back of Henrico Police cruisers. A suspect is seated in the front seat in order for the arresting officer to watch their hands, according to a police source.

"RPD arrived shortly after and we reported the incident. They called over Henrico PD who ended up arresting him after taking statements from those who witnessed the assault," the protest organizer said.

CBS 6 Legal Expert Todd Stone said the context in which Rogers allegedly told police he was a leader of the KKK will be important in court.

“When did it come out? How did he say it? Was it in response to an officer asking, ‘Why did you do this?’ And if so, that's going to aggravate things and it's going to help a prosecutor get closer to proving that he did it because of the racial reasons,” Stone explained.

Stone said the Commonwealth’s Attorney revealed that information to secure that Rogers stay in jail.

“The reason the prosecutor brought that out is because it helps them with the bond hearing and helps the judge to understand that this is somebody who should not be out right now,” he explained.

Virginia’s misdemeanor assault and battery statute states “if the person intentionally selects the person against whom a simple assault is committed because of his race, religious conviction, color or national origin, the penalty upon conviction shall include a term of confinement of at least six months, 30 days of which shall be a mandatory minimum term of confinement.”

“An assault is an assault and the intent is always relevant, so whether he's convicted under this section or not doesn't matter much for sentencing purposes,” Stone explained. “The revving of the engine and his subsequent acts can be enough to establish his intent.”

Henrico Police also confirmed a juvenile was in the truck with Rogers. Witnesses said that it was a teenager.

“Initially, [prosecutors] will get the charges that they think are appropriate with just a cursory look at it and then hold him in jail. Then they'll continue the investigation and they can always charge something later,” Stone stated. “They could do it in Circuit Court with a direct indictment or they could do it with a warrant down in the lower courts. Just because he's got three specific charges now doesn't mean that that's ultimately what he'll be facing when he goes to trial.”