Richmond Police Chief: 'We're going to get the city back' 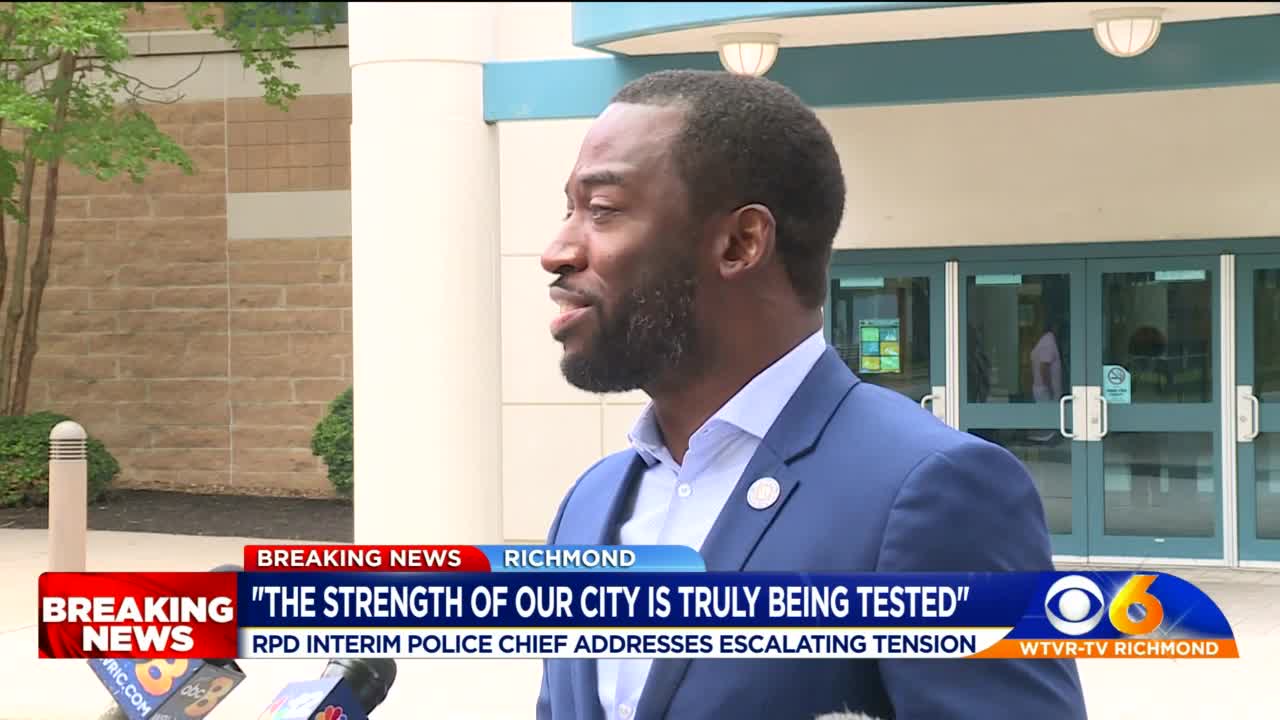 Officers have impromptu meeting with mayor as interim chief is introduced

RICHMOND, Va. -- Interim Richmond Police Chief Jody Blackwell said Richmond Police would regain control of the city. Blackwell made that announcement after he was introduced at a Thursday afternoon press conference. He also used the opportunity to show support for Richmond Police officers who have been scrutinized over their handling of protesters and rioters in Richmond.

"The strength of our city is truly being tested," he said. "We know as a society that we need to improve race relations, combat discrimination, and racism. As law enforcement professionals, it is our responsibility to ensure we treat all citizens fairly and equally. In all of our dealings."

Several Richmond Police officers have been put on leave and investigated since protests, some peaceful, others violent, began in Richmond following the death of George Floyd in Minneapolis.

No update was given on the status of those officers.

Blackwell addressed morale within the department as officers come face-to-face with protesters speaking out against police brutality nationwide. Some of those interactions end peacefully. Other interactions end with police using tear gas, pepper spray, and flashbangs to disperse the crowds.

"We all share the same frustrations, right? None of us, not one police officer, not one community member, asked for what we're going through right now," he said. "For my officers, every decision has been a bad decision. It's a double-edged sword. It frustrates me to no end. I have some of the greatest men and women employed with the Richmond Police Department and they stand judged by people who refuse to even sit down and talk to us civilly."

Interim Chief Blackwell said despite it all, he feels supported by both Richmond Police Officers and the community.

"We as a community have to step up and take our city back because too many sit in silence and fear. I'm afraid," he said. " However, my love for this city and my love for these men and women, it will not cause me a challenge as far as reacting. And we're going to get the city back. It's just, it's amazing to see them stand up and I can't talk about them enough. You know, and we didn't ask for any of this, including me being here. But we're going to make do with what we got. And we're going to continue to push forward."

A Richmond Police spokesperson said the mayor was in the building, but he was meeting with officers and unable to make the introduction.

Blackwell did not address ways he planned to change the way Richmond Police interact with the community. That was a major point Mayor Stoney made when he announced Smith would be replaced.

Blackwell is a 22-year veteran of the Richmond Police Department.