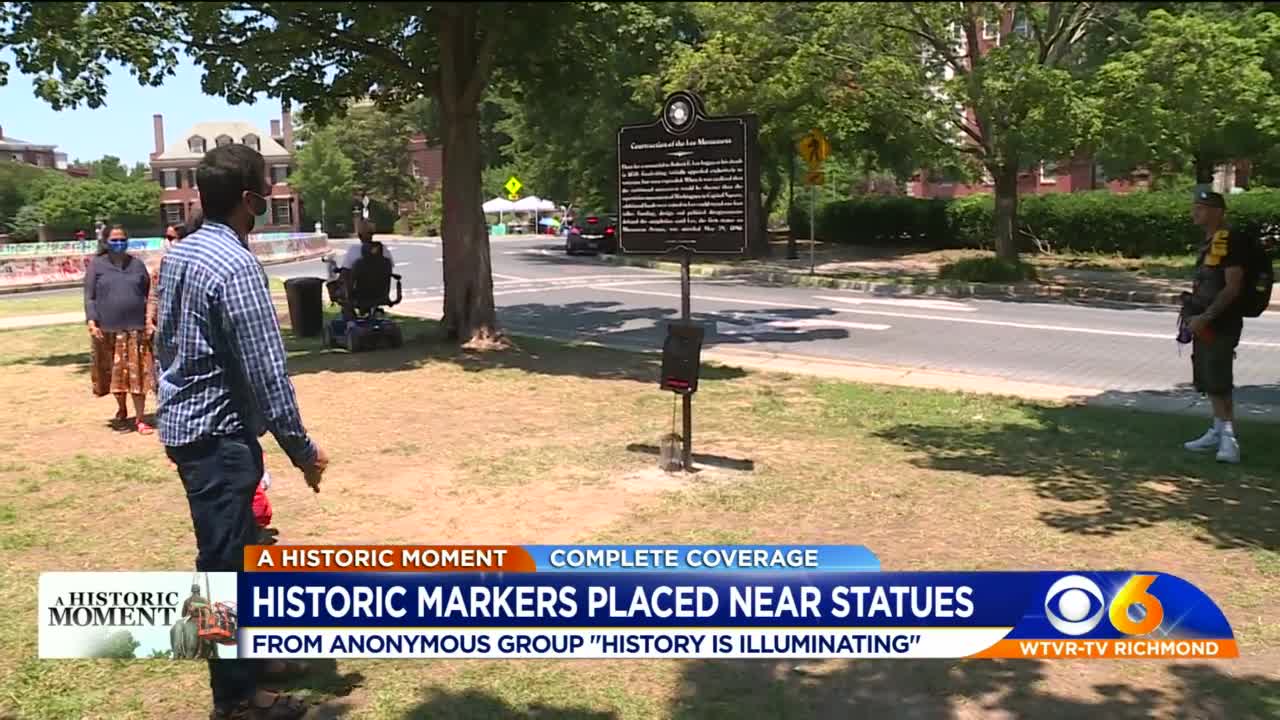 A group of local historians and artists have planted giant historical markers in front of several Confederate statues along Richmond’s Monument Avenue. 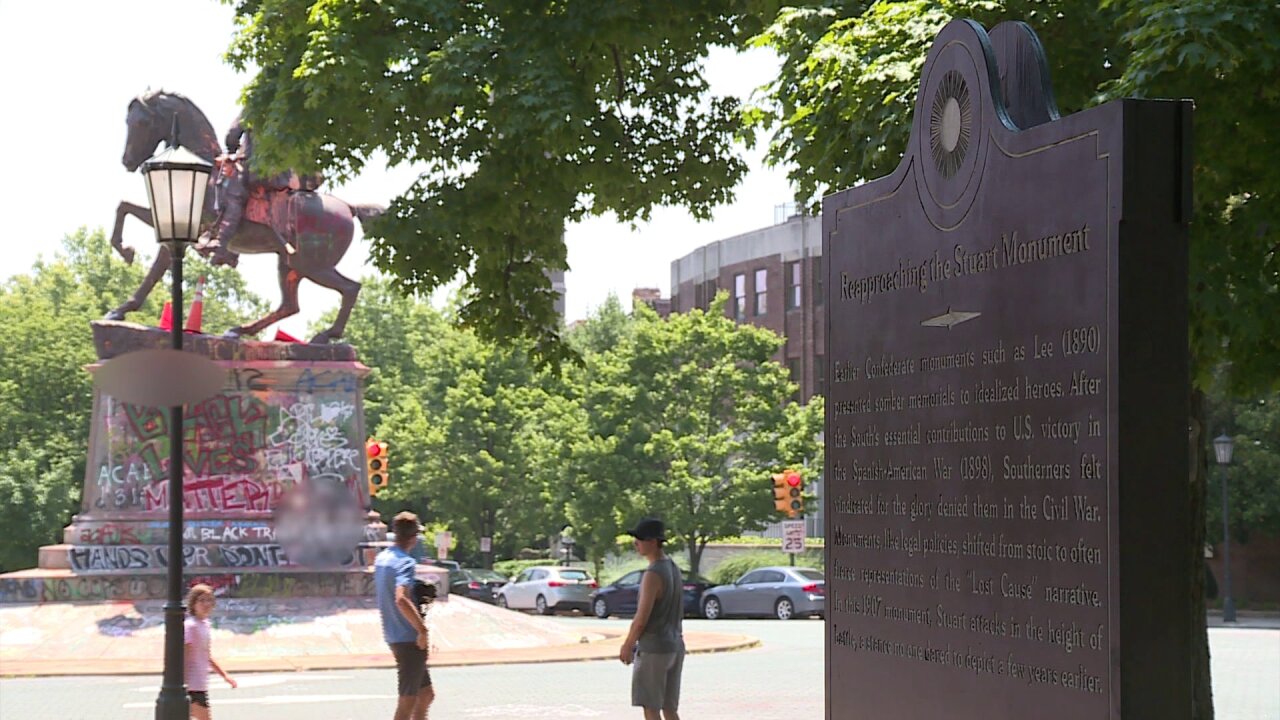 The anonymous group, named “History is Illuminating,” discovered their markers outside the Stonewall Jackson memorial and Matthew Fontaine Maury memorial ripped out of the ground.

“Someone wanted Richmond to stop learning about our history,” the group posted on Instagram Friday morning.

Crews removed the Jackson and Maury bronze statues on Wednesday and Thursday respectively. The statues are among the first of 11 Confederate statues and cannons that Mayor Levar Stoney promised to take down in the city beginning on July 1.

One side of the historical marker included details about the Confederate statues. The other side depicted information about Black Richmonders who lived during the same time period.

Two markers remained standing outside the Gen. Robert E. Lee Statue, as well as one in front of the J.E.B. Stuart Statue in the grassy median. Another is posted near the Jefferson Davis memorial.

Bennette Burks, who lives nearby, first noticed the plaques on Wednesday.

“I learned about the first Black woman physician in Richmond, which I thought was interesting,” he explained. “I hope the one removed is replaced.”

Jeffrey Rykard, who helps run the Richmond Action Alliance table near the Lee statue, said visitors from across the country have stopped to read the messages.

Stephanie Arduini, Director of Education for the American Civil War Museum in Richmond, said visitors are increasingly interested in learning about the monuments.

“Some of this history is not new to those of us who are familiar with the story, but we’ve been excited to see the traction the markers are getting in the community. For a lot of folks in the general community these stories are new,” she explained.

Arduini said she is not part of the group, but knows a few of the members.

She said some of information on the markers was gathered and used during the Monument Avenue Commission. That information was posted on the website OnMonumentAve.com, which was collected by colleagues at the American Civil War Museum, Virginia Museum of History and Culture, Library of Virginia and Valentine Museum in Richmond.

During public hearings held by the commission in 2017 and 2018, some Richmonders argued that no context nor markers should be placed at the Confederate statues at all and be left as is.

"History is Illuminating" promised to replaced the markers that were taken down.

“It goes to show how we mark our past on our landscape matters,” Arduini stated.

In a phone conversation with two of the organizers, they said they started planning on erecting the markers about a month ago. Collectively 20 to 30 people helped design, pay for, and install the markers.

The organizers, who wanted to remain anonymous, said the markers were installed while the Jackson statue was being removed from the pedestal.

The group is made up of a blend of black and white people, who represent all genders, gender identities, and sexual orientations, according to the organizers.

Some in the group differ on whether they believe the Confederate statues should stay up, but agreed that the entire story of Monument Avenue wasn't being told.

The organizers said while they did not get permission from the city to put the markers up, they did research where it was safe to dig.

"We feel like the 'Lost Cause' narrative is a part of the true story but only a small part of it. It's a thread of a much larger textile of the world we are going through," they said. "It's important to look back and explore all the narratives and reassess who our heroes are."

Gibson Print on South Laburnum Avenue printed "zines" detailing more about the markers. StudioTwoThree on West Clay Street helped design and distribute the copies that are placed below the markers.

A Richmond Police spokesman referred CBS 6 to the Mayor’s Office when asked for a comment on Friday.

When asked if there is an investigation regarding who put the markers up and if there are any plans to take them down, a spokesman with the Mayor's Office replied, "No. And no."