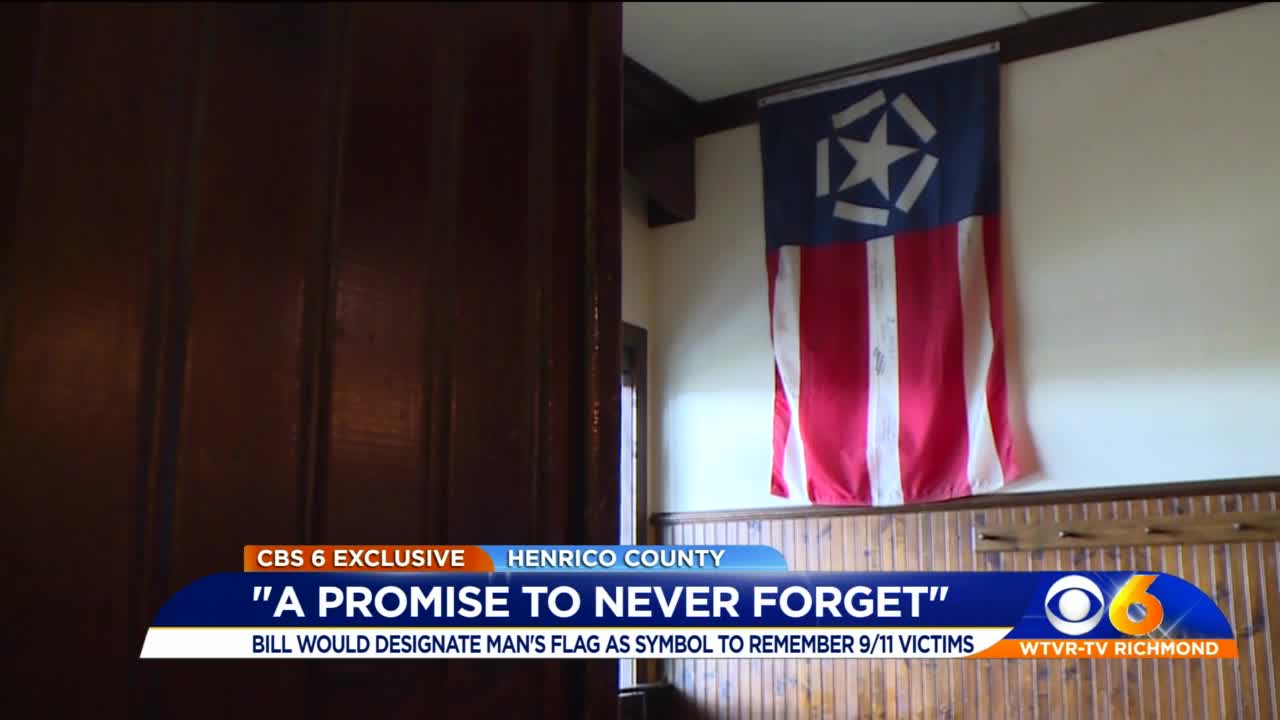 The days following the 9/11 attacks, Richard Melito sketched a rendering of a flag on a napkin inside of his Henrico restaurant.

If signed into law, the bill would designate the Freedom Flag “as a national symbol of the nation’s commitment to honoring and remembering all those who lost their lives as a result of the September 11, 2001 terrorist attacks,” according to a release.

The flag would then be flown at federal buildings including post offices, VA Hospitals, Capitol Hill, and the White House. The legislation would require the Freedom Flag to be flown each year on Patriot Day (September 11) and each subsequent day through the end of September.

The days following the 9/11 attacks, Richard Melito sketched a rendering of a flag on a napkin inside of his Henrico restaurant.

He drew ten symbols that help described the events of that horrific day.

“The goal for me was to make sure that all Americans never forget 9/11. I designed this flag as a symbol of remembrance and not to overdo the American Flag,” Melito explained.

Melito’s non-profit, the Freedom Flag Foundation, has since worked to educate children in schools about the events of 9/11.

“There are people now that are born who have no idea what September 11 is all about,” Melito stated.

Rep. Spanberger called Melito’s flag a “powerful, physical reminder of one of the darkest days in American history.”

Twenty lawmakers, including all of Virginia’s representatives, have cosponsored the bill.

The meaning of the Freedom Flag is illustrated by the colors and symbols of the flag, including:

The Freedom Flag has been adopted by the Virginia Historical Society and received a proclamation as an official state symbol of remembrance by then-Governor Mark Warner.

The Henrico County Board of Supervisors granted approval for the construction of a monument of the flag near the intersection of Eastridge and North Parham Roads in the West End nearly a decade ago.

Melito said sales from flags and donations from individuals and corporations are helping the foundation reach its fundraising goals.

“Never Forget" was a message of unity expressed by all Americans in the days after September 11, 2001, and it is our hope that with the passage of the National NEVER FORGET Act, it will help current and future generations to ‘Never Forget,’” foundation board member Joshua Dickerson said.

For more information on the project and the Freedom Flag Foundation, click here.