RICHMOND, Va. -- An early-morning wreck that caused a tanker truck to spill thousands of gallons of diesel fuel along Interstate 95 in Richmond closed the heavily-traveled interstate for much of Saturday.

Troopers were called to the crash involving a sedan and a tanker truck on I-95 south near the Boulevard exit just after 5:40 a.m., according to Sgt. Dylan Davenport with Virginia State Police.

Investigators said that when a 44-year-old man driving a sedan changed lanes, he hit the front of the tanker truck.

The big rig then ran off the left side of the interstate, hit the jersey wall and overturned, according to Davenport.

That is when the truck started to spill thousands of gallons of diesel fuel, according to Richmond Fire officials.

Update: I-95 north/south (#Richmond) - All northbound lanes are now open near mile marker 77. The southbound lanes remain closed. Continue to follow posted detours and use alternate routes until further notice.

The wreck closed all of the interstate's southbound lanes as well as the northbound left lane and shoulder, according to VDOT officials.

Then all northbound lanes were shut down shortly after noon, but later reopened.

Officials said southbound traffic was being diverted off at the Boulevard exit.

The interstate reopened around 1:30 a.m. Sunday. 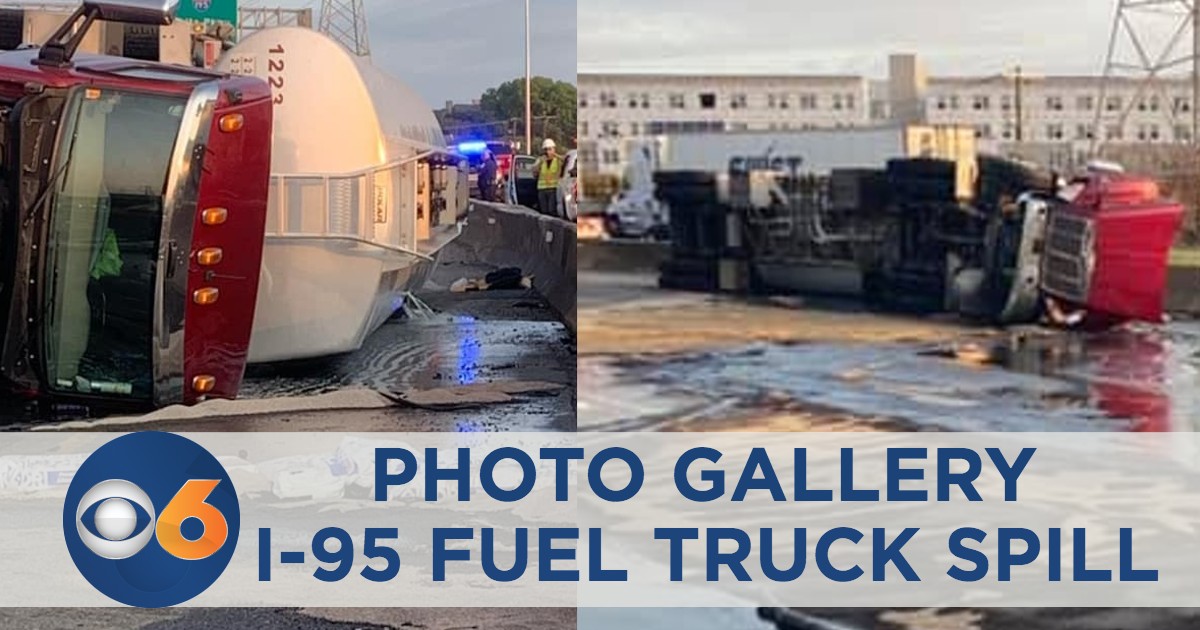 RFD: Spill is 'one of largest' hazmat calls this year

Richmond Fire officials said that when their crews arrived, the truck carrying 7,500 gallons of diesel fuel was "leaking heavily across all lanes of traffic."

"The RFD Hazmat Team has been on scene for hours along with the Henrico County Division of Fire Regional Hazmat Team," RFD officials said. "They are working to safely offload the fuel, before uprighting the overturned tractor trailer and removing it from the scene."

Fire officials posted video of the overturned truck being "uprighted" by a tow truck around 3 p.m.

RFD officials called the spill "one of the largest" hazardous materials calls the department has worked this year.

🚨I-95 south (#Richmond) - All southbound lanes are closed near mile marker 77 due to a crash. Use alternate routes and expect delays.🚨 pic.twitter.com/ZYK1YWlM5W

Troopers said the tractor-trailer driver was transported to an area hospital with injuries that were not life-threatening.

The driver of the sedan, Anthony R. A. Robinson, of Charlotte, NC, was issued a summons for unsafe lane change, according to Davenport.

The two people in the sedan said they were not hurt, officials said.

Troopers said everyone was wearing their seat belts.