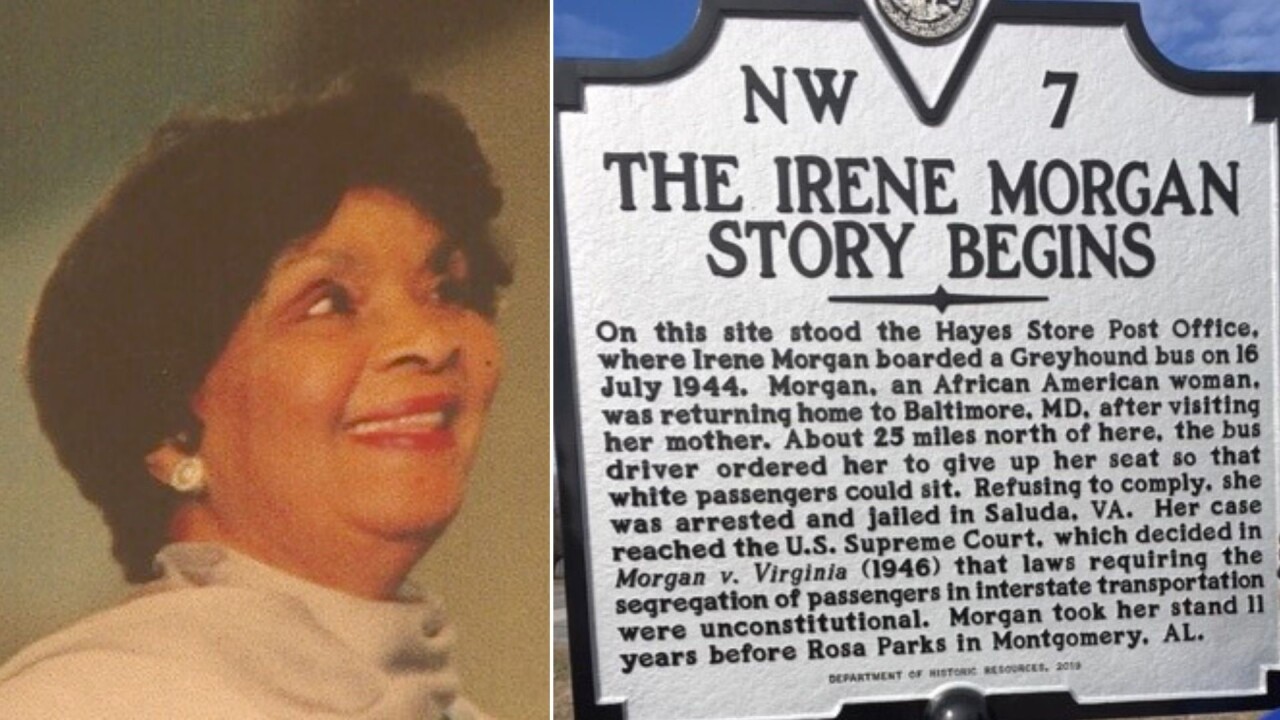 GLOUCESTER COUNTY, Va. -- Flipping through pages from the past, Brenda Morgan Bacquie remembers how her mother paved the way for the future, WTKR reported.

“She was raised Seventh-Day Adventist, so a little on the meek side, but feisty when called to be that,” Bacquie said.

“She said, 'You do what you have to do, but I’m not getting up,'” Bacquie recalled.

Morgan is remembered for a brave act of civil disobedience years before the civil rights movement.

“When the driver looked, there were no more seats available for whites in that section, so that’s when he proceeded to come to the back and tell my mother she had to get up,” Bacquie said.

On a crowded Greyhound bus, leaving her mother’s home in Hayes, Virginia, Morgan kept her seat to take a stand.

“So she sat there and true enough, by the time he pulled into Saluda, he went into the courthouse and got two sheriffs to come back to the bus. He said, 'You need to get up,' and she said, 'No, I paid my fare, I’m not going.'"

Bacquie remembers the stories her mother told her about the fateful day.

“We kind of talked about it as, 'Well, what did you feel when they arrested you and dragged you off the bus?' She said, 'You pick the hill you want to die on, and that was my hill.'”

“It was cited ‘refusal to surrender her seat to a member of the white race’ is how it was done, so she said, ‘That one, I will never pay.'”

The NAACP took her case and in a landmark ruling, the U.S. Supreme Court struck down a Virginia law requiring racial segregation on commercial interstate.

Ever so humble, Morgan did not want the accolades, but they eventually came.

“Sure enough, President Clinton answered the phone directly, and he said, 'We would like to honor you in Washington.'"

Seventy-six years later, a historical marker in Hayes commemorates Morgan’s journey at the site where it all began.

On this site stood the Hayes Store Post Office, where Irene Morgan boarded a Greyhound bus on 16 July 1944. Morgan, an African American woman, was returning home to Baltimore, MD, after visiting her mother. About 25 miles north of here, the bus driver ordered her to give up her seat so that white passengers could sit. Refusing to comply, she was arrested and jailed in Saluda, VA. Her case reached the U.S. Supreme Court, which decided in Morgan v. Virginia (1946) that laws requiring the segregation of passengers in interstate transportation were unconstitutional. Morgan took her stand 11 years before Rosa Parks in Montgomery, AL.

“She would like her legacy to stand that as she stood up let others do the same."

Morgan’s marker is located at 2425 Hayes Road. Click here to read more about her story and how the marker came to be.