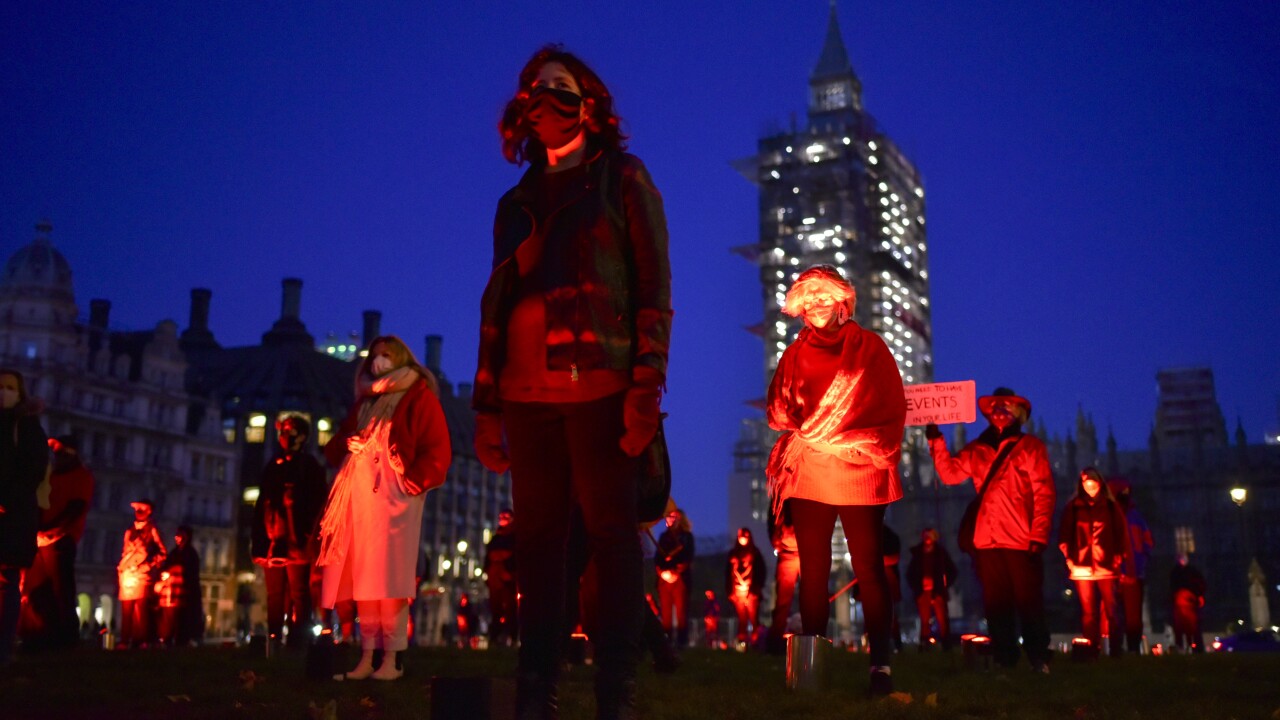 Alberto Pezzali/AP
Demonstrators hold a silent vigil in Parliament Square to rise awareness on entertainment and arts world, in London, Saturday, Oct. 31, 2020. Backstage technicians and crews are calling for more fundingfrom the government for the performing arts and hospitality sectors as the coronavirus lockdown is widely anticipated to be extended in England to help control the spread of COVID-19. (AP Photo/Alberto Pezzali)

LONDON — British Prime Minister Boris Johnson has announced that the government is putting all of England under a monthlong lockdown next week after being warned that a resurgent coronavirus outbreak will overwhelm hospitals in weeks without tough action.

Johnson said in a televised news conference night that the new measures will begin Thursday and last until Dec. 2. Non-essential shops must close and people will only be able to leave home for a short list of reasons.

Unlike during the U.K.’s first lockdown, schools, universities and manufacturing businesses will stay open.

The U.K. reported more than 21,900 new confirmed virus cases on Saturday, bringing the country's total since the start of the pandemic to over 1 million.

The United States, India, Brazil, Russia, France, Spain, Argentina and Colombia also have recorded more than 1 million cases, according to Johns Hopkins University. Scientists say the number of cases is likely much higher because of a lack of testing and reporting.

Britain’s confirmed death toll is 46,555, the highest in Europe and fifth highest in the world.

The new restrictions aim to help combat a coronavirus surge after scientific advisers warned hospitalizations and deaths from the resurgence of the coronavirus could soon surpass the levels seen at the outbreak’s spring peak.

Epidemiologist John Edmunds, a member of the government’s scientific advisory group, say cases were running “significantly above” a reasonable worst-case scenario drawn up by modelers this month.

Prime Minister Boris Johnson had introduced a system of local restrictions for England based on levels of infection. But scientists say it hasn’t been enough.

The U.K. is recording more than 20,000 new coronavirus infections a day, and government statisticians say the actual figure is likely far higher.