HENRICO COUNTY , Va. -- Authorities said one person was injured after their pickup truck slammed into the back of a firetruck working a crash along Interstate 295 in Henrico County early Saturday morning.

Henrico Fire officials said crews were dispatched to a crash on I-295 northbound near the I-95 interchange just before 6:30 a.m.

"Engine 1 arrived on scene to find Hanover County Engine 406 already on scene as they were dispatched to the same call," officials with Henrico County Fire Station 1 posted on Facebook. "Engine 1 took a position behind Engine 406 to help protect the area for the firefighters that were operating on scene. Engine 1's crew exited the rig and were headed to assist Hanover 406's crew when they heard a loud crash behind them. They turned to see that a vehicle had made impact at the back corner of Engine 1 with enough force to move the rig forward about three feet."

Officials said while crews assisted that driver, who was transported to an area hospital, another fire engine pulled up to "protect the new scene."

"None of the crews operating on the scene were injured, and Engine 1 did a phenomenal job protecting the scene," officials noted. 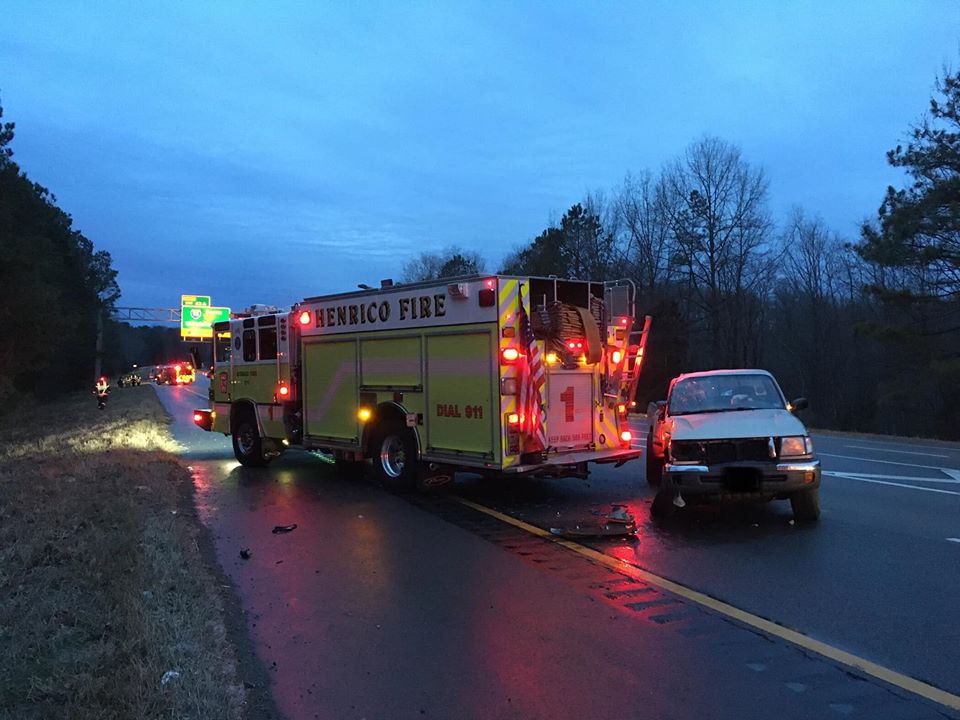 First responders said "combination of rain, freezing temperatures, a vehicle traveling at highway speed, and slippery conditions on the bridge over the Chickahominy Swamp definitely played a role in all of these incidents."

Firefighters also urged drivers to move over and slow down when you see them on the highway.

"The shoulders/medians are full of disabled vehicles and emergency, or recovery vehicles these days. This is why you may see fire engines blocking entire lanes on interstate calls... It's crystal clear that without Engine 1 on scene this morning, the crews of Henrico Engine 1 and Hanover Engine 406 may have suffered another devastating blow just a little over a year since the incident on the same highway involving Hanover Engine 406 that took the life of our friend Lt. Brad Clark... We want to be there for people that need us, but we all want to make it home to our families at the end of our shifts as well."

Henrico Fire officials also cautioned against a rush to judgement.

"We don't know how it happened. We don't know what lane the vehicle was in before it struck Engine ," the Facebook post reads. "The only thing we know is that the bridge located a little way behind the engine was slick. Please keep that in mind when looking to blame someone for the incident. We don't know all the facts, and we're of course wishing a speedy recovery to the driver."

Officials said there is no word yet on how badly the fire truck was damaged.