Advocates rally for prison reform bills at State Capitol, call for ‘total transformation of the system’

RICHMOND, Va. -- Activists, family members and supporters rallied Saturday at the Bell Tower in Capitol Square to support recently filed prison reform bills in the General Assembly, including measures such as parole, record expungement and incentives for good behavior.

More than 50 supporters attended the rally, which allotted speaking time for organization leaders, and family members of those incarcerated, and for letters from inmates to be read. Many held posters outlining prison reform bills currently before the General Assembly, or telling the story of an incarcerated loved one.

The rally was led by the Virginia Prison Justice Network, which includes 20 organizations working for reform in the Virginia Department of Corrections. The network was formed by those who are or were incarcerated and prison reform activists with the goal of creating justice and a voice for incarcerated individuals and their families.

“We're not just looking for legislative reform, what we want is a total transformation of the system,” said Margaret Breslau, Virginia Prison Justice Network co-founder. “And in order to do that, prisoners and their family members have to have a seat at the table.”

“We abolished parole in ‘95 and it did nothing but only eviscerate people's chances and feelings that there's hope, or there's a light at the end of the tunnel,” Morrissey said. “If we want to incentivize prisoners to take advantage of courses, get an education and become purposeful when they're released, we've got to get involved.” 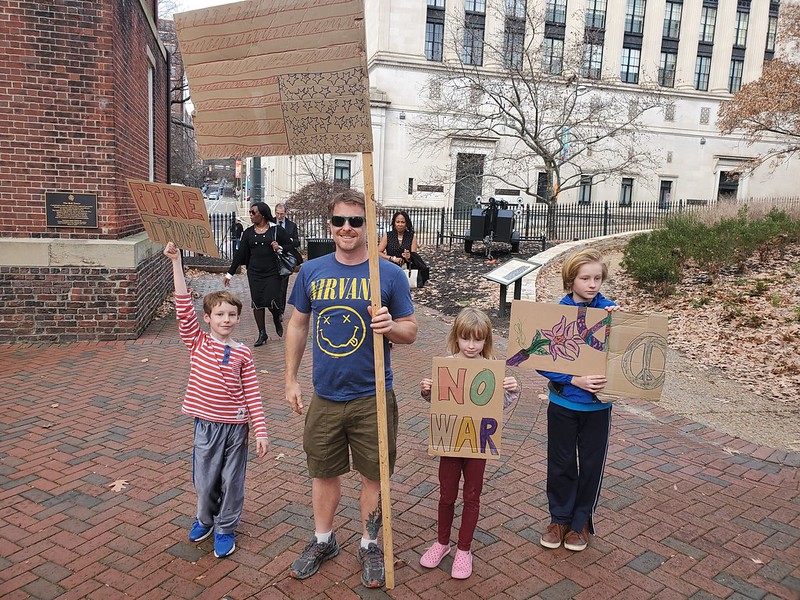 Dispatches from behind bars

Several inmate letters were read at the rally, including a letter from Hassan Shabazz, the co-founder of the Prisoner of Conscience and Virginia Prison Justice Network, urging people to take action and speak up against inmate inequities.

“We cannot be satisfied with what we perceive as victories were no meaningful change has taken place,” Shabazz wrote. “On the inside, we must do our part to qualify ourselves for a second chance. And on the outside, we need those who believe in second chances to make that presence felt at the General Assembly.”

Dale Pughsley, also known as Askari Danso and co-founder of the Prisoner of Conscience and Virginia Prison Justice Network, said black communities, mothers, children and economies are left to suffer as a result of incarceration.

“My 22 years of experience as a prisoner in Virginia teaches me that prisons house poor, uneducated blacks, many of whom also have mental illnesses,” Pughsley wrote. “Most of these men and women are thought of as incapable of contributing to the modern knowledge-based economy in any real way.”

Pughsley’s letter states he came to prison at age 18 for second-degree murder.

One letter was from inmates who called themselves “the captives” at Sussex 1 State Prison, a maximum-security facility in Waverly. Inmates wrote that prisoner on prisoner violence and staff turnover is extremely high, and “stabbings and inmate assaults are a regular occurrence.”

“Lack of respect for prisoners, by guards and administrators, as well as the ability to communicate with us on a professional level is extremely high,” the letter stated.

A volley of profanity, including racial slurs, followed to indicate the common language staff use to communicate with prisoners.

Julie Calajan, identified as an inmate at the Central Virginia Correctional Unit, said in a letter the incarceration system “doesn’t rehabilitate, it debilitates,” and there are many shortcomings at smaller prison facilities.

Carvonza Teasley, identified as a prisoner at Buckingham Correctional Center, asked in a letter to restore the parole process in Virginia and says there is job discrimination within the institutions.

“We can barely provide for ourselves which prohibits us from providing for our families in a time of need,” Teasley’s letter stated. “How is this possible when we are working real jobs that will pay more than minimum wage in society?”

Advocates were there also to support reform for juveniles imprisoned.

Slater spoke of her support for House Bill 551, which would mandate that children removed from their homes are put in smaller facilities of no more than 30 beds, and would remain close to the minor’s community.

Richard Walker, founder and CEO of Bridging the Gap in Virginia, supported HB 32, a bill which would expunge records eight years or older for convicted felons..

Walker said this could allow the more than 400,000 convicted felons in the commonwealth more opportunities, including access to “gainful” employment.

“Right now everyone behind bars has to serve at least 85% of their sentence, and they get that tiny bit off for basically behaving and learning and working,” Carter said. “This bill would expand that so that they can earn even more time off, and it would make it so that by maintaining good behavior over time, then they'll get to earn even more time.”

Carter started the Humanization Project with her partner, who she said was wrongfully convicted. Carter said the organization helps humanize those behind bars in the public eye to aid criminal justice reform.

According to their website, Gasparotto supports the legal and public policy departments through “analysis, field work and research.” He said he hopes legislators pass all of the prison reform bills.

Gasparotto said the ACLU helps connect the community and came out in support of the rally.

“[We] try to connect them and gather stories, and then talk and really show legislators and people all across the Commonwealth that these are the issues that matter to the people in Virginia,” Gasparotto said.

Janet “Queen Nzinga” Taylor of the Defenders for Freedom, Justice and Equality concluded the rally by urging the crowd to spread awareness and information concerning prison and criminal justice reform.

“Knowledge does no good when you keep it to yourself,” Taylor said.

A meeting was held after the rally at Second Baptist Church at 1400 Idlewood Ave. to continue discussions for change and hear more inmate stories.

Gov. Ralph Northam unveiled his criminal justice reform agenda earlier this month. He proposed decriminalizing simple possession of marijuana, opting for a fine instead as a means to combat disproportionate rates of arrests in communities of color. The ACLU does not support the measure, and instead wants to see a full repeal of the prohibition on marijuana. Northam proposed legislation to raise the felony larceny threshold to $1,000, doubling the threshold that it was raised to last session. He also supports parole reform by expanding eligibility for consideration based on an individual’s age and medical conditions.

Prison reform bills filed in the General Assembly that were supported or mentioned at the Virginia Prison Reform Rally:

HB-996 provides eligibility for parole for those charged with non-capital felonies who were sentenced by jury prior to Fishback v. Commonwealth and after the abolishment of parole, and for those convicted by a jury not instructed about the change. Chief Patron: Del. Joe Lindsey, D-Norfolk

HB-551  juvenile community correctional centers shall be located where at least 5% of juvenile commitments occur, which would be calculated using an average of the state rates over three consecutive years. Centers should also be designed to house 30 or fewer individuals. The bill also states that a juvenile should be placed in a center closest to their primary residence. If the closest center is more than a one hour drive or one and a half hour trip via public transportation, the department shall use an alternative placement. Chief Patron: Del. Jeion Ward, D-Hampton

HB-32 allows a person convicted of a misdemeanor or non-violent felony to file a petition to have court records expunged if the person has been free of incarceration, probation and post-release supervision for at least eight years. The person cannot have prior or subsequent convictions (other than traffic violations) or pending criminal proceedings. Chief Patron: Del. Joe Lindsey, D-Norfolk

SB- 91 repeals the abolition of parole. The bill also states the Virginia Parole Board should establish procedures for those previously not eligible for parole. Chief Patron: Sen. John Edwards, D-Roanoke

SB-821 provides eligibility for parole for those charged with non-capital felonies who were sentenced by jury prior to Fishback v. Commonwealth and after the abolishment of parole, and for those convicted by a jury not instructed about the change. The bill states that those who would be eligible for parole because of this bill shall be given priority over other eligible people and should have a parole hearing by July 1, 2021. Chief Patron: Sen. Joe Morrissey, D-Petersburg

SB-809 repeals the abolition of parole. The bill also states the Virginia Parole Board should establish procedures for those previously not eligible for parole. Chief Patron: Sen. Joe Morrissey, D-Petersburg