Arguments are leading cause of murder in Richmond, police hope civilian officers can help

RICHMOND, Va. — Arguments are the leading cause of homicides in Richmond, and the police department has a new program that will be rolled out to hopefully address the issue, the RPD told the City Council’s Public Safety Committee on Tuesday.

“It’s a temporary problem and people are choosing a permanent solution,” said Chief William Smith. “And that’s very disturbing from my standpoint is that the relationships that exist in some of our cases have been people who’ve been friends for years and then they’re not friends all of a sudden or an incident happens that causes conflicts within that relationship.”

In the coming weeks, Smith's department will unveil a new program made up of civilians who, hopefully, can help stop arguments from turning deadly.

“What we’re looking to do is to bring on-board civilians who have credibility. Who have the ability to stand before some youth or stand before people who are a little bit older and discuss 'what does conflict resolution mean, what do relationships mean, what does it mean to think that you’re disrespected but you’re really not, that there’s just a difference of opinion,'” Smith said. “You know, respectful disagreement is OK. We can move forward from that and how do we teach our youth, how do we show that is really important.”

Smith also said while some areas in the city will see a spike in homicides, the areas of public housing “consistently experience high levels of homicides and shootings” adding that concentrations of poverty need to be reduced “through redevelopment into mixed-use, mixed-income developments.”

Smith also broke down 2019’s homicide numbers in greater detail and said, using data up to October 15, 2019, that the majority of victims and offenders fall into the younger age ranges 19-35.

Homicides also continue to be on the higher end of the spectrum since 2008. 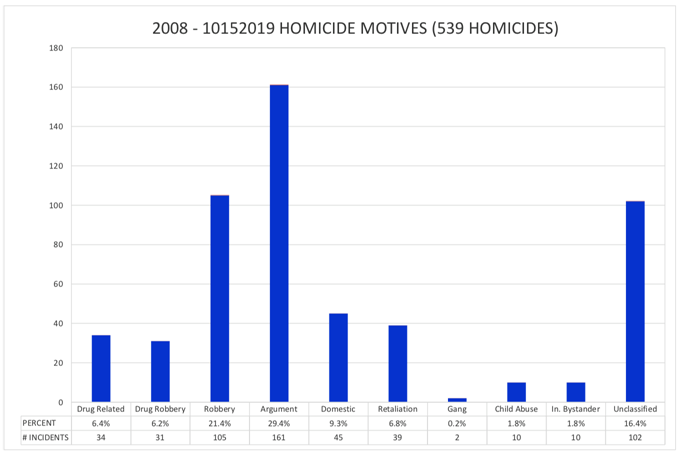 Smith said that there is a myriad of reasons for the increase.

“There are multiple reasons. There are trends we see within that pattern that are related and then there are others that have no relationship whatsoever,” added Smith. “I look at Markiya Dickson as one of the prime examples. She’s simply in a park enjoying an afternoon and that doesn’t fit any trend.”

In terms of solving the homicides that do occur, Richmond police have historically had better clearance rates than the national average.

Smith said that number should increase in the coming weeks as a number of cases are before a grand jury and he is expecting indictments to be handed down.

In some cases, it takes time for police to be able to make an arrest, Smith said.

“Some times it takes multiple years,” Smith said. “In many cases, it comes down to someone being willing to come forward and say what they saw and say what they know. A lot of times in the heat of the moment, the first six months, they may not be willing to do so. But a year or two or three down the road, there may be less disincentive for them to do that. Either fear of repercussion or fed up with the situation at hand that they are willing to come forward and speak.”