Firefighters were called to the business on Route 168 at 1:38 p.m., according to WTKR.

When the first crews arrived around 1:48 p.m., they spotted flames shooting from the building's roof.

"Smoke can still be seen coming from the location of the Cotton Gin,"  WTKR reporter Julio Avila said at 6:30 p.m.

Officials said the fire severely damaged the gift shop, but no injuries were reported.

There is no word yet on what sparked the blaze. 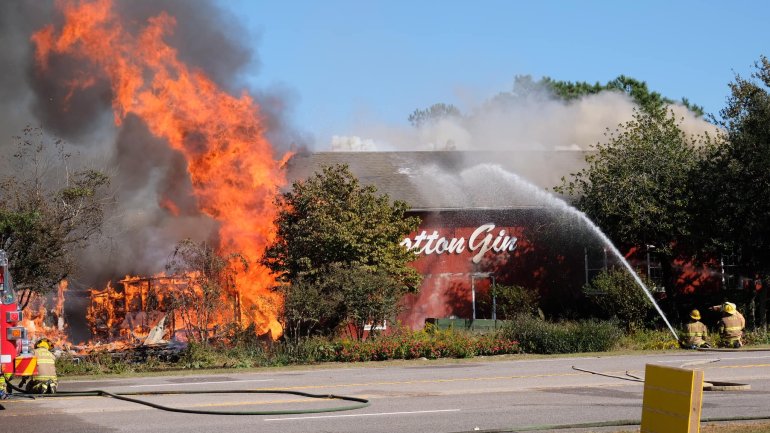 Business owner on Cotton Gin loss: 'It’s pretty much just us and them'

Locals said the loss will be devastating for the small town.

“It’s been about a year since I’ve been there, but it’s going to be missed,” Donna Griggs said. “I cried when I heard about it.”

Griggs  was saddened that her granddaughter will not be able to visit the flagship, decades-old store.

“She asked if she could go next Thursday and I said, 'Sure.' But next Thursday, it won’t be here," Griggs said.

Benjamin Beasley, who owns BJ’s Carolina Cafe, which is just down the road from where firetrucks lined up along Route 158, paniced when he saw the fire.

“It actually startled me,” Beasley said. “I drove to work this afternoon about 1:30 in the afternoon and I saw the fire coming out and the fire trucks there.”

Beasley said his heart broke for the family who owns the Cotton Gin, who he said visits his diner often.

“There’s not much here in Jarvisburg," Beasley noted. "It’s pretty much just us and them that are the year-round businesses that are here."

The  flagship Cotton Gin in Jarvisburg, which opened in 1929 and began as a working cotton gin, expanded to three additional locations, according OuterBanks.com.

The website refers to the Cotton Gin as a "beloved landmark with its large windmill and picturesque gardens."

Beasley said he hopes the owners can rebuild, but noted “it’s going to be very strange to drive by with it not open tomorrow.”