RICHMOND, Va. — Tickets for the three-week run of “HAMILTON” went on sale Friday morning in Richmond.

Tickets were sold at 8 a.m. at the Altria Theater Box Office and at 10 a.m. online. Friday morning, lines wrapped around the building as people waited for their ticket.

Some people camped out since 7 p.m. Thursday night. Bernly Bressler and his group were one of them.

"They've got fourth grade daughters, I got a fourth grade son, second-grade son, and a little girl," said Bressler. "They love it. They're all fans -- and here we are."

Bressler said he and his group passed the time by telling stories and laughing. He said they got a surprise treat too.

"All the folks have been really nice," said Bressler. "They brought these great donuts out!"

Linette Jeter, an employee with Duck Donuts, was helping to make that happen.

"They love it, they love it. And it's real hot, real fresh," said Jeter. "Made with extra love."

Attorney General Mark Herring was also among the hundreds waiting in line. He tweeted saying he was spot number 503.

"My wife has been wanting to see Hamilton ever since it’s come out. So I woke up early, set my alarm, and we’re really excited," said Herring.

Bressler said he couldn't wait to see the look the ticket brings to his son's face.

"When he finds out he’s going to be through the roof. It’s going to be awesome," said Bressler. "That’s what it’s all about. I mean waiting in line -- who cares. When he hears that we have tickets, that’s it. That’s good for me.

BroadwayInRichmond.com, The Altria Theater Box Office and ETIX are the only official and authorized primary sellers of Hamilton tickets.

It JUST KEEPS GOING. A look at @AltriaTheaterVA where hundreds of people are lined up waiting for their Hamilton tickets! Box office opened at 8. You can get tickets online beginning at 10 a.m. @CBS6 pic.twitter.com/cZp2uX4CZO

Prices ranged from $75 to $149 with a select number of $249 premium seats available for all performances.

“There is a maximum purchase limit of eight (8) tickets per household,” a Broadway In Richmond spokesperson said.

In addition to those regular tickets, each show will have 40 tickets available for $10 each. Those tickets can only be purchased through a special ticket lottery. Details about the lottery will be announced closer to showtime, however, in other cities on the “HAMILTON” tour, the $10 ticket lottery involved downloading an app.

Broadway in Richmond recently warned consumers to be diligent and safe while purchasing “HAMILTON” tickets. 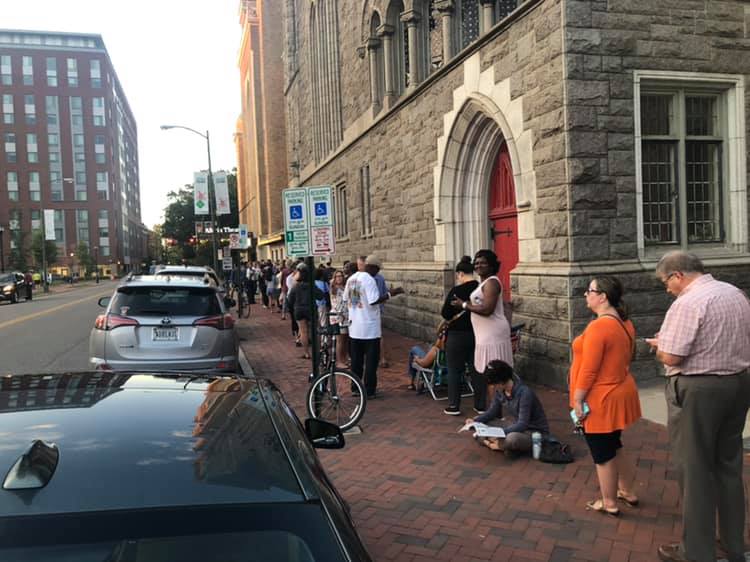 Numerous third-party sellers are advertising tickets that they do not actually have at highly inflated prices, according to Broadway in Richmond.

“If you see tickets for hundreds or thousands of dollars, you are probably buying from a third-party ticket broker and there is no guarantee these tickets are genuine,” representative Cindy Creasy said.

Though it is legal to re-sell tickets in Virginia, tickets purchased from other sources may be more expensive and potentially invalid.

When in doubt about where to purchase tickets, check with Altria Theater Box Office first, either in person at the corner of Main and Laurel streets in Richmond or by calling (804) 592-3384.