5 injured in crash that shut down I-85; tractor-trailer driver charged

DINWIDDIE COUNTY, Va. – A tractor-trailer driver has been charged after a two-vehicle crash left five people with injuries and shut down Interstate 85 for hours in Dinwiddie County Monday morning.

Virginia State Police responded to the crash at southbound I-85 at the 41-mile marker at approximately 4:54 a.m.

“The trooper's preliminary investigation reveals that a 2018 Freightliner tractor and trailer was traveling in the right lane of travel on southbound I-85 when it struck a 2018 Toyota Corolla in the rear.  The Corolla then struck the guardrail on the right side, veered back onto roadway, and finally going off-road left striking a tree,” said a state police spokesperson.

Police said the driver of the tractor-trailer, Duane L. Bryant, 47, of North Carolina, lost control, overturning the tractor and trailer on its side and struck a tree.

“The load was not lost, but a diesel spillage resulted from the damage in the crash,” said the spokesperson.

Bryant was transported to the hospital for treatment of minor to serious injuries. He was wearing his seat belt, according to police.

Bryant has been charged with reckless driving and failure to maintain control.

The crash shut down I-85 for several hours and caused a detour in the area. Hazmat crews in addition to VDOT, and Dinwiddie County Sheriff's Office are assisting with road closures.

The right lane has reopened and the detour has been lifted. The left lane remains closed until further notice. Continue to expect delays. 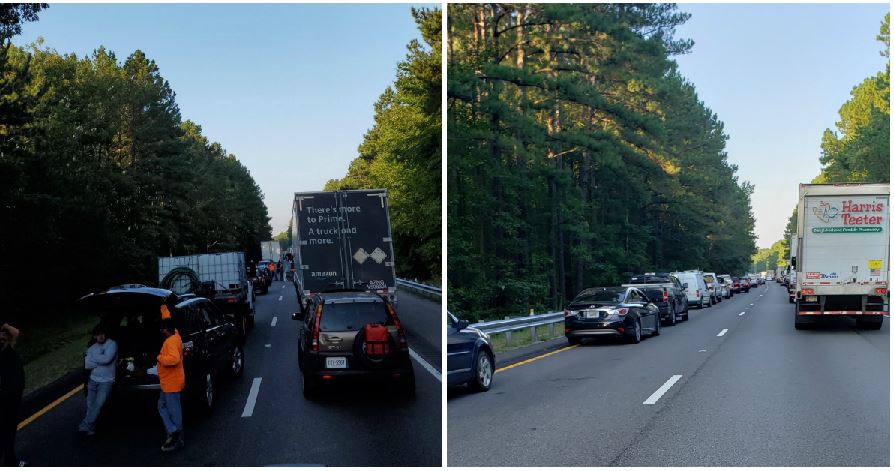