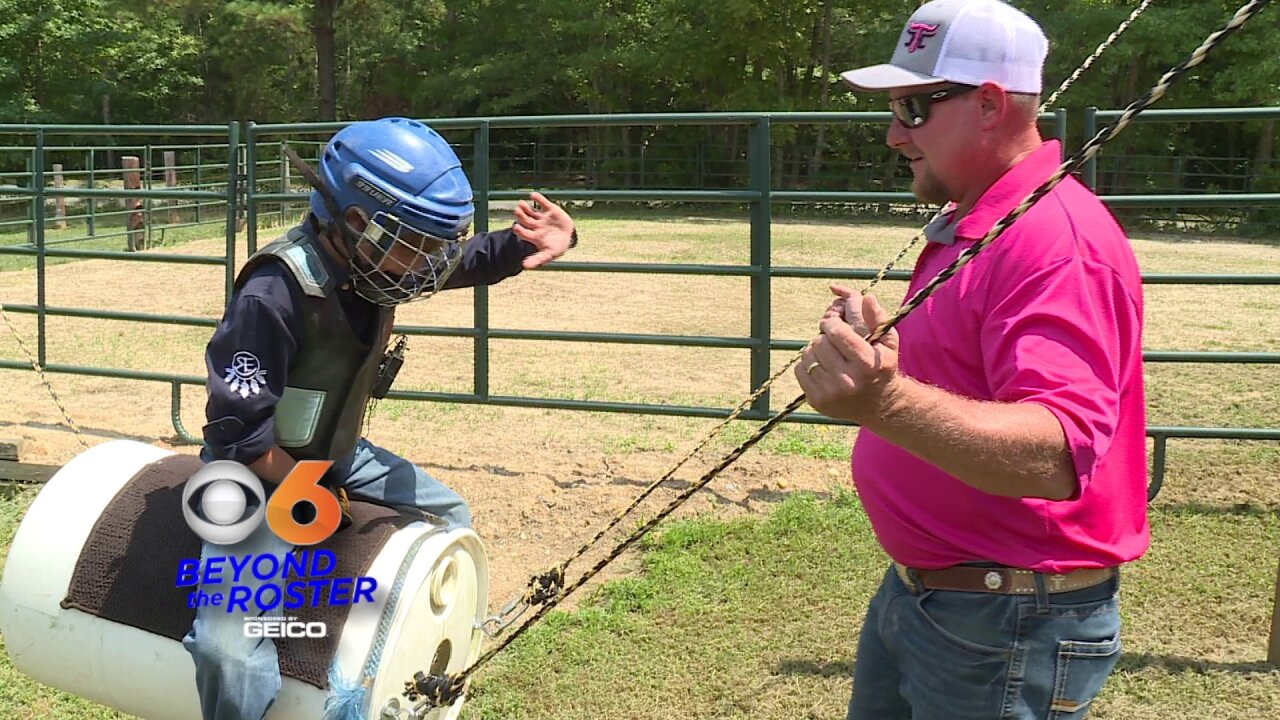 NEW KENT COUNTY, Va. -- The sport of rodeo has its origins way back in the 16th century, and began to grow in this country when Spanish conquistadors started settling what is now the American Southwest.

The Caldwell family of New Kent doesn't stretch their history with the sport quite that far, but they do go back four generations filled with calf-roping and bronco riding.

Eleven-year-old Tyler Lane Caldwell is carrying on his family's tradition -- and might end up being the most successful of the bunch.

Tyler began what's called mutton busting, riding sheep around an enclosed area, when he was just 7.

He has now progressed to mini bulls, which is something of a misnomer.

"When it's my turn, I get in the chute and heat up my rope again and put my hand in my rope," Tyler explained. "When I'm ready, I nod my head."

While they are not the one-ton behemoths you see the professionals ride, these animals still range between 600 and 800 pounds -- or roughly 10 times Tyler's weight. It is enough to make even the most confident parent a little apprehensive.

"The first time I was scared to death," Kim said.  "Now, honestly, I get just as excited when he gets in there, because I know he loves it."

"A lot of people wouldn't look at it the way I do," added Tyler's father, Scott.  "You could let him play football and get hit in the head for 60 minutes or you could put him on top of a bull for 8 seconds."

"When you see that passion he has for what he's doing, you can't hold him back" added Kim.

Tyler's passion has turned into a fair amount of success already even in his young career.

He was the Virginia Junior Rodeo Association Bull Rider of the Year last year and has won his bull riding event in each of the last four rodeos he has attended.
That's not to say he hasn't had his setbacks, including getting thrown off almost immediately in a recent outing.

"Right away, off the first jump," Tyler recalled.  "All I know is that I got my arm back and my hips got turned. When I fell off the other bull, I landed right on my face and I just laid there."

Despite the family history with the sport, none of this seemed possible for Tyler just after he was born.

At the age of six months, Tyler was diagnosed with craniosynostosis. The soft spot in his skull had fused together too quickly and he needed surgery to remove portions of his skull to give his brain room to grow.

His parents couldn't envision any kind of physical activity for him during his preschool years.

"I wasn't keen on the idea of football or anything like that where I felt like he would get hurt," Kim said.  "Anything really dangerous. I kinda wanted to put bubble wrap around him and keep him from doing things."

But his doctor's gave Tyler a clean bill of health, and the opportunity to continue the family tradition -- one that does not appear to have any end in sight.

"When they get on the back of a bull they put their life in the Lord's hands," Scott said.  "He'll protect him."

"You just can't imagine how proud we are of him. He's living his dream."

Thus far, Tyler hasn't been hurt seriously, just some bumps and bruises. He is working to qualify for the national finals in the International Mini Bull Riding Association, which will be held in Las Vegas in December.