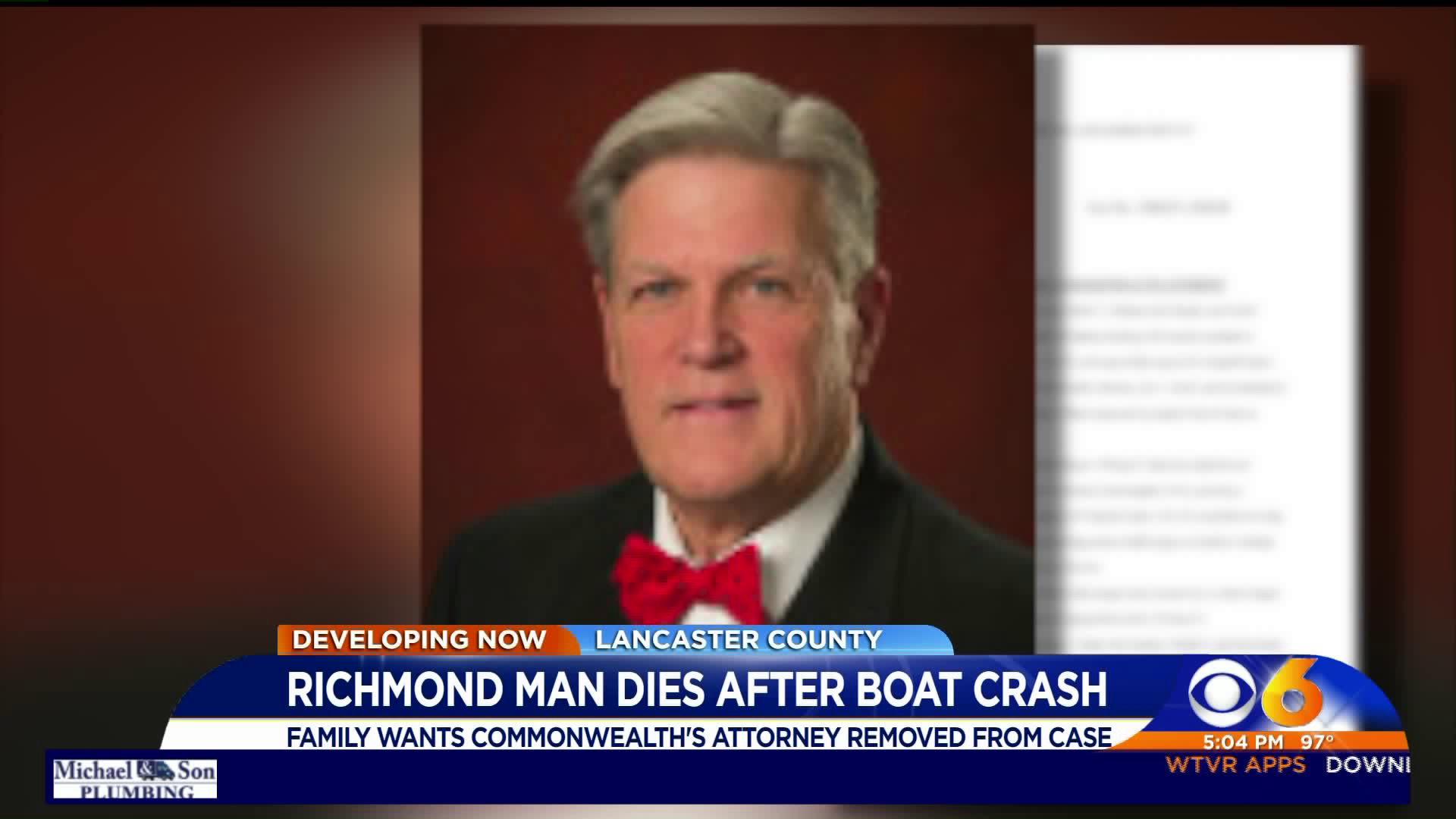 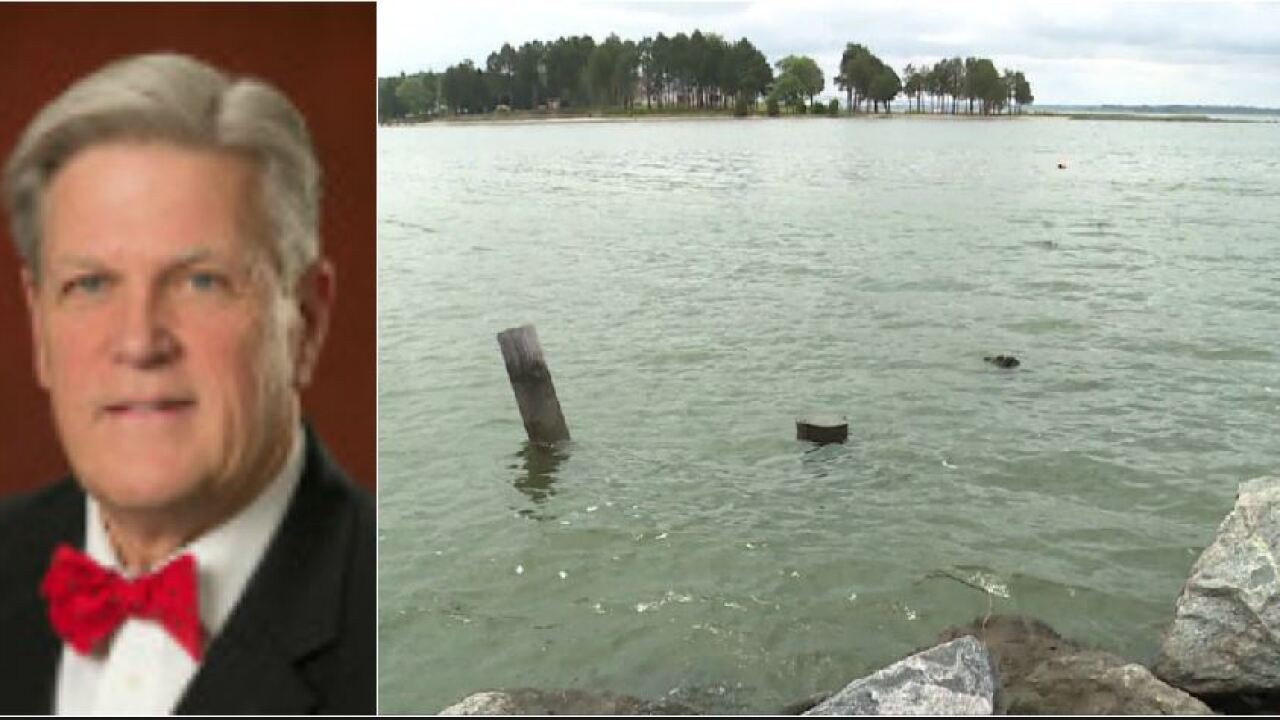 LANCASTER COUNTY, Va. -- The attorney for the family of a man found dead in the Rappahannock River in August 2017 filed a motion requesting Lancaster County Commonwealth's Attorney Jan Smith and his assistant(s) be disqualified from handling the case due, in part, to the appearance of incompetence and a lack of impartiality. This case centers around the death of 31-year-old Graham McCormick.

McCormick was found dead in the Rappahannock River at the entrance to Carter's Creek in August 2017.

An investigation led a grand jury to charge McCormick's friend, Rand Hooper, with involuntary manslaughter as well as failing to render aid.

According to a civil lawsuit filed by McCormick's family and later settled, a drunken Hooper allegedly drove his boat drunk and crashed into a bulkhead near the Tide's Inn. The lawsuit claimed the impact threw McCormick out of the boat, but Hooper left the scene without trying to find his friend.

Habeeb claimed in his filing that the Commonwealth's Attorney did not interview the victim's mother while she was present with Hooper for approximately two hours while her son's body was located and recovered. She was interviewed five months after his death, and only then at her request.

He also claimed that in June 2018, Smith told McCormick's father he was going to indict Hooper on second degree murder charges, but did not do so, and Hooper was not indicted until nearly a year after McCormick's death.

The filing claimed Smith initiated little to not contact with McCormick's parents as the case proceeded, but spoke with Hooper's parents at a charity event in September 2018.

Habeeb also claimed the McCormick family and members of law enforcement asked Smith to step aside from the case and let a special prosecutor handle it because of the appearance of impropriety, but Smith refused stating "this is an election year" and he "didn't want people to think Smith can't do it," and "I have an election next year."

The filing also claimed Smith did not visit the accident scene until May 13, 2019, and only did so after Chip Woodson, the man who owns the property where the boating accident occurred and McCormick's body was found, urged him to do so.

It also stated Smith called Graham McCormick's father, Burke, regarding a plea deal he negotiated with Hooper's attorneys where Hooper would plead guilty to two felony charges in exchange for one year in jail, and told him he had gone over the case with the judge, and the judge had some some doubts about whether the Commonwealth could meet its burden of proof on the manslaughter charge.

To that point, Lancaster County Judge Michael McKenney recused himself June 19 from the case, and told the court he was touched by victim impact statements he received in the case, in particular, one written by Chip Woodson.

"I just want justice to be done. That's what I wanted, and I couldn't tell what was going to happen. When I had the chance to say how it has impacted me, I wrote the letter," Woodson said in an interview after the hearing.

"I read the statement ten times. I then called judges across the circuit," Judge McKenney told the court.

Woodson alleged in his statement that Commonwealth's Attorney Jan Smith told Woodson that he talked to the judge about the case and both decided there was not enough information to convict Hooper in a jury trial.

"This is not correct. Our system prohibits the court from having access to evidence before trial," Judge McKenney said. "I was not engaged in a plea agreement. I did not encourage it. I don't know, today, what is in it."

McKenney then apologized "that we have come to this circumstance" and extended his "heartfelt condolences" before recusing himself from the case.

"Our system depends entirely on acceptance of our institutions," Judge McKenney said. "I hope my action today restores integrity."

McCormick's brother Gordon said he disagreed with the plea agreement, yet he wanted a conclusion in the case. However, he now said he hoped the case would go to trial.

"It was another step I guess, was really looking forward to concluding this, but I think it's more important that this is seen through," Gordon McCormick said outside court Wednesday.

Winston Blair, who was there the weekend Graham McCormick went missing and identified his body, attended the court hearing.

Her sister, Willis Blair, is the girlfriend of Rand Hooper, but Winston she supported the McCormick family in the case.

"I was looking forward to today bringing closure to this 22 month nightmare," she said in a statement. "I am grateful that Judge McKenney maintained his integrity and did what he thought was right by the justice system and for the McCormick family. His heartfelt condolences for the victims, family and friends increases my trust in the system. I agree with Gordon that it is more important that this is seen through."

CBS 6 reporter Melissa Hipolit's calls, texts, and emails to Smith about this case have not yet been returned.