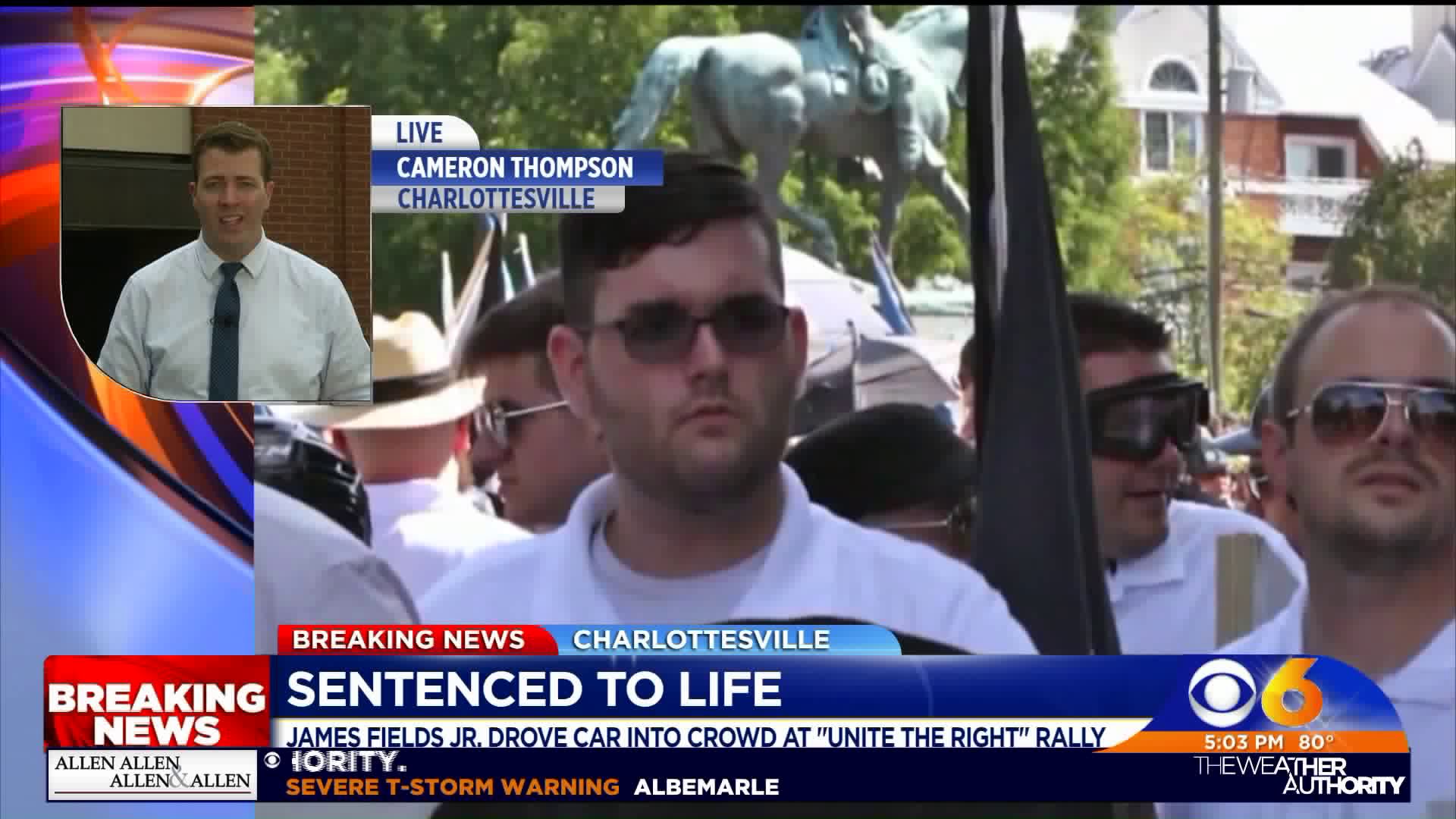 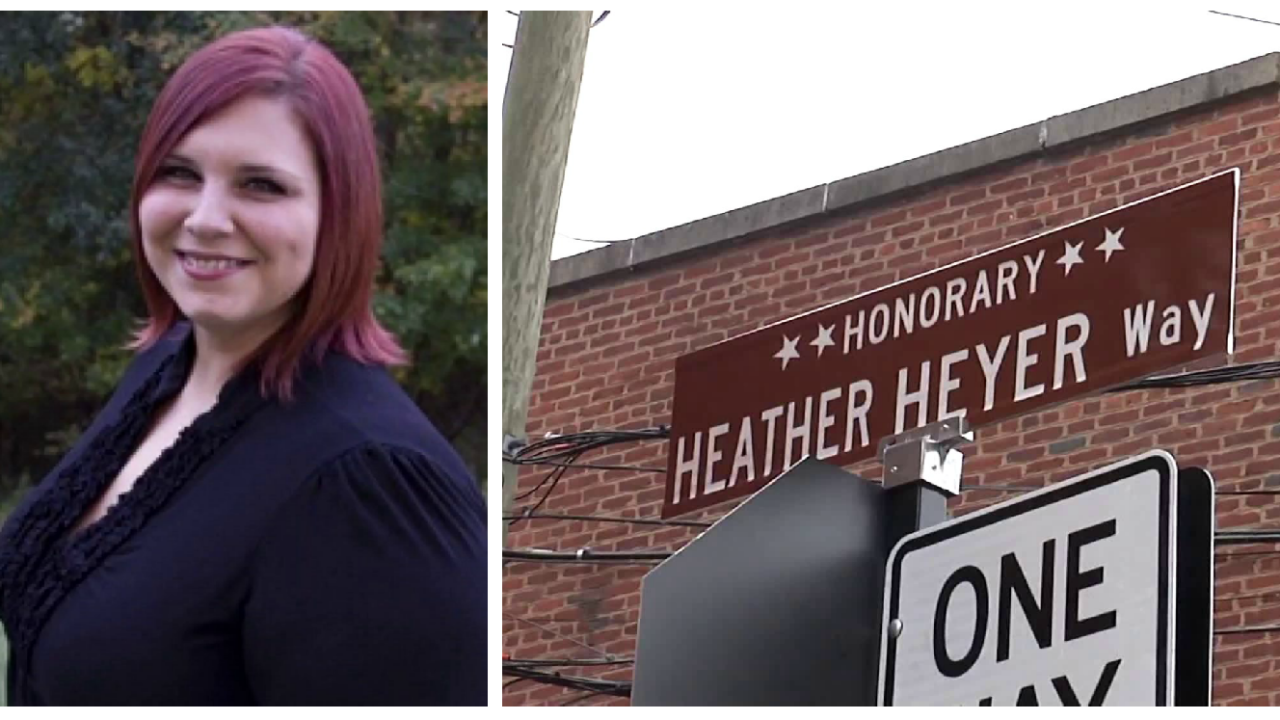 CHARLOTTESVILLE, Va. -- James A. Fields Jr., the man who drove into a crowd of counterprotesters in Charlottesville's "Unite the Right" rally two years ago, leaving one woman dead, was sentenced Friday to life in prison in his federal hate crimes case.

Fields pleaded guilty to 29 federal hate crimes in March as part of an agreement that eliminated the death penalty as a possible punishment. Under the sentence imposed by US Judge Michael F. Urbanski, Fields will serve his sentence without the possibility of parole.

Urbanski said Fields was “fueled by hate and racism,” adding that the memes Fields posted of cars driving through the crowds were “chilling” and that the crime was premeditated and deliberate.

The judge said Fields was “fueled by hate and racism”.

He said the memes Fields posted of cars driving through the crowds to be “chilling” and that this was a crime of premeditation and deliberation.

The judge said Fields is “a profoundly disturbed young man” and has a history of violence and outbursts and that releasing him back into society would be “too great a risk to take”.

He thanked the victims for sharing their stories and called them incredibly powerful and said that while they expressed great amount of hurt they are dealing with, he was inspired by the result they showed of fighting for human rights.

Before sentencing Fields addressed the judge and said, "I'd like to apologize. I apologize to my mother for putting her through all of this. Every day I think about my actions and how this could have gone differently. I'm sorry."

Fields, 22, wore a gray and white jumpsuit in court and was mostly expressionless during the morning testimony. When he apologized, he did not face victims who were in the courtroom.

Fields was 20 when he attended the August 2017 demonstrations in Charlottesville and joined white nationalists, neo-Nazis and other groups opposed to the city's decision to remove a statue of Confederate Gen. Robert E. Lee. During a day of violent clashes, he drove his vehicle into a crowd of counterprotesters, killing Heather Heyer, a 32-year-old paralegal, and injuring more than two dozen people.

After court adjourned, Heyer's mother, Susan Bro, told reporters that Fields' apology was simply a last-ditch effort to get a reduced sentence.

"He's the least sincere person I've ever met," Bro said, adding that she's glad he was sentenced to life in prison. She said he probably deserved the death penalty "but it wouldn't accomplish anything."

Bro said she hopes this sentence sends a message to other people in hate groups.

"You don't get away with it there are serious consequences to this,' she said. "Theoretically, he caused a lot of harm to the white supremacist movement, for that I'm glad."

Video of attack played in court

Thomas Cullen, US attorney for the Western District of Virginia, said the sentence was "an acceptable and appropriate outcome in this case."

"One of the factors a court has to consider is will this sentence achieve a deterrence effect on the community at large," he said after court ended. "Sending someone to prison for manifesting in a violent way those racist and violent views will send a message."

Before sentencing, Urbanski heard testimony from prosecution witnesses and the defense. Prosecutors, seeking a sentence of life in prison, went over details of the attack, including playing video of the car going into the crowd.

Urbanski directly addressed the victims in the courtroom after the video played: "I have to turn away, just watching is terrifying. I cannot imagine the trauma you all have sustained. ... I want to thank you for your courage. To all the victims I wish you grace and peace."

'It's a crime of premeditation'

In a memorandum to the court, Fields pleaded for mercy and asked for a lesser sentence.

Fields' publicly appointed defense attorney, Lisa Lorish, argued before sentencing that life in prison was excessive and violated Fields' Eighth Amendment rights. His lawyer said the court should not give Fields a life sentence because of his age, history of mental illness and childhood trauma and to show that no one is defined by their worst moments.

"Incarceration alone will never be able to account for the harm that this community experienced," she said.

She also asked that Fields be sent to a federal prison in Kentucky, so his mother would be able to visit him.

The judge acknowledged Fields suffers from mental health issues and noted he received treatment for years but voluntarily gave up that treatment when he turned 18.

"It's a crime of premeditation," the judge said.

Urbanski said Heyer's death was "a loss that will remain with her family forever."

"Many of these victims are young people who will suffer for years to come," he said. "To all the victims, I wish you grace and peace."

Fields was convicted of other charges in state court

Fields also was convicted in state court of first-degree murder and other charges, and the jury recommended a sentence of life in prison. He is due to be sentenced in that case July 15, Commonwealth's Attorney Joseph Platania said in March.

According to the federal indictment, Fields took to social media before the rally on August 12, 2017, and "expressed and promoted his belief that white people are superior to other races and peoples; expressed support of the social and racial policies of Adolf Hitler and Nazi-era Germany, including the Holocaust; and espoused violence against African Americans, Jewish people and members of other racial, ethnic and religious groups he perceived to be non-white."

The day before the rally, as Fields prepared to leave his home in Maumee, Ohio, to travel to Charlottesville, he got a text from a family member urging him to be careful, the indictment says.

"We're not the ones who need to be careful," Fields responded, attaching a photo of Hitler, according to the indictment.

Once in Charlottesville, Fields joined protesters who had gathered to denounce the removal of a Confederate statue from a city park in "chants promoting or expressing white supremacist and other racist and anti-Semitic views," the indictment says.

Later, as Fields drove along the streets of Charlottesville in his Dodge Challenger, he encountered a crowd of racially and ethnically diverse people chanting and carrying signs promoting equality, the indictment says.

"Fields rapidly accelerated, through a stop sign and across a raised pedestrian mall, and drove directly into the crowd. Fields's vehicle stopped only when it struck another vehicle near the intersection of Fourth and Water Streets. Fields then rapidly reversed his car and fled the scene," according to the indictment.

Many of the individuals gathered in the street when Fields mowed them down "were chanting and carrying signs promoting equality and protesting against racial and other forms of discrimination," according to the indictment on the hate crime charges.