Craddock had put in his "two weeks notice" via email Friday morning, according to Virginia Beach City Manager Dave Hansen.

"To my knowledge, the perpetrator's performance was satisfactory and he was in good standing within his department. There were no issues of discipline ongoing," Hansen said after completing a "thorough review" in the wake of the shooting.

In addition, Hansen said Craddock "was not forced to resign."

Virginia Beach Police Chief Jim Cervera stressed Craddock "was not terminated -- and he was not in the process of being terminated."

When asked if one of the victims in the shooting was Craddock's immediate supervisor, Hansen said that he was not, but that a male victim was in his chain of command.

Cervera said part of the investigation will focus on the shooter's motive, including his employment status.

Additionally, there is no information that shooter was "targeting anyone," the police chief said.

Cervera said by all accounts "it was a normal work day" for shooter and investigators are working to establish timeline of Craddock's day and added that officials "can track is entry and exit of certain doorways" in the municipal center.

Colleague: 'It wasn't his nature'

Joseph Scott, an engineering technician, said he exchanged pleasantries with the quiet, 40-year-old certified professional engineer for the city in the bathroom shortly before the carnage.

Scott went home for the day. There was no sign of what was to come.

"I'm sure I'm going to hear all kinds of things about DeWayne, but I liked him," Scott told CNN. "I worked with him. He was what I thought was a good person. When we were together, we would talk about family, friends, things that we were going to do, trips we were going to take and things like that."

Scott said he worked with Craddock, whom a Virginia government source has called a "disgruntled employee," for several years.

Scott said he doesn't want Craddock "painted as an evil person -- something happened, but it wasn't his nature," adding that he lost many friends Friday.

Four officers who responded to the scene followed the sound of his gunshots and engaged him in a "long gunbattle," police Chief James Cervera said. He suffered injuries during a gunfight with officers and died shortly afterward, Cervera said.

A representative for Craddock's family sent a photo to CNN of a note taped to their door that included their statement.

"The family of DeWayne Craddock wishes to send our heart felt condolences to the victims. We are grieving the loss of our loved one," the statement read. "At this time we wish to focus on the victims and the lives loss [sic] during yesterdays tragic event. Our thoughts and prayers are with the families of those who loss [sic] their lives, and those recovering in the hospital."

Gunman was engineer for city

Craddock was a certified professional engineer for the city of Virginia Beach in the public utilities department for about 15 years. He is listed on department news releases as a point of contact for information on local road projects over the past several years.

Before working for the city, Craddock was a project manager for a Virginia-based engineering firm. The firm's 2003 hiring of Craddock was detailed in a local business newspaper that reported he had a bachelor's degree in civil engineering from Old Dominion University.

Craddock obtained his certified professional engineer license in the state in 2008, according to Virginia's Department of Professional and Occupational Regulation. The license was to expire in June 2020.

He enlisted in the Virginia National Guard in April 1996, according to spokesman A.A. Puryear. He was assigned to the Norfolk-based 1st Battalion, 111th Field Artillery Regiment, 116th Infantry Brigade Combat Team as a 13B cannon crew member.

He was discharged in April 2002 and held the rank of specialist at the time, the spokesman said. His records did not indicate overseas deployments.

Craddock's parents, reached by phone Friday evening, confirmed to CNN that their son worked for Virginia Beach's public utilities department but said they weren't aware of any trouble he was having with his employer.

A search of online court records in Virginia Beach and surrounding counties shows Craddock was cited for a motor vehicle infraction in 2013 but nothing else. 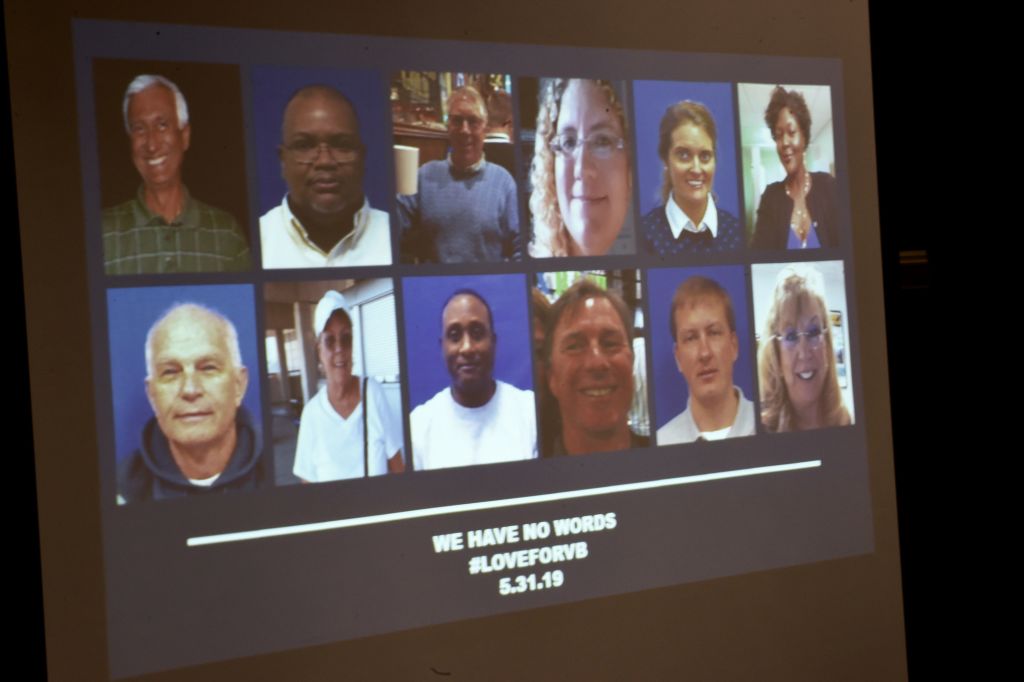 He kept to himself, neighbor says

Clarisa Morel, 22, lives next door to Craddock's apartment, where the shooter had what appeared to be three security cameras set up in a pair of windows looking out onto the grassy complex.

She had just arrived home Friday night when police launched flash-bangs at his apartment. Morel said she heard an officer over a loud speaker saying, "Step out with your hands up."

Morel has lived in the apartment for two years but only remembered interacting with Craddock once, a few months ago.

Craddock was in front of his apartment with two other people, smoking what smelled like marijuana, Morel said.

Another neighbor told CNN affiliate WAVY that the gunman kept to himself and was always in and out of his apartment with a book bag.

Cassetty Howerin, 23, lived below Craddock and said he was awake during all hours of the night.

"You heard him walking around; he would drop stuff at like 2 a.m., and me and my roommate would try to figure out what he was doing," Howerin said.

His neighbors said they rarely saw him.

He didn't engage in much talk, Howerin said, adding "in the year I've been there, we've maybe had three conversations and that's about it.

He would just go in and out, the neighbor said. By the time Howerin would wake up and leave at 7 a.m., he was gone.

Howerin said the shooting has left neighbors petrified. "I live right under him, so that could have easily been me or my girlfriend or my roommate," Howerin said.

Despite their few conversations, he "seemed like a nice guy," Howerin said. "He introduced himself when we first moved in. That's just crazy."

Craddock looked like a "jacked guy, he stood maybe 6 foot and he always carried a book bag with him. That's all I really know," Howerin said.