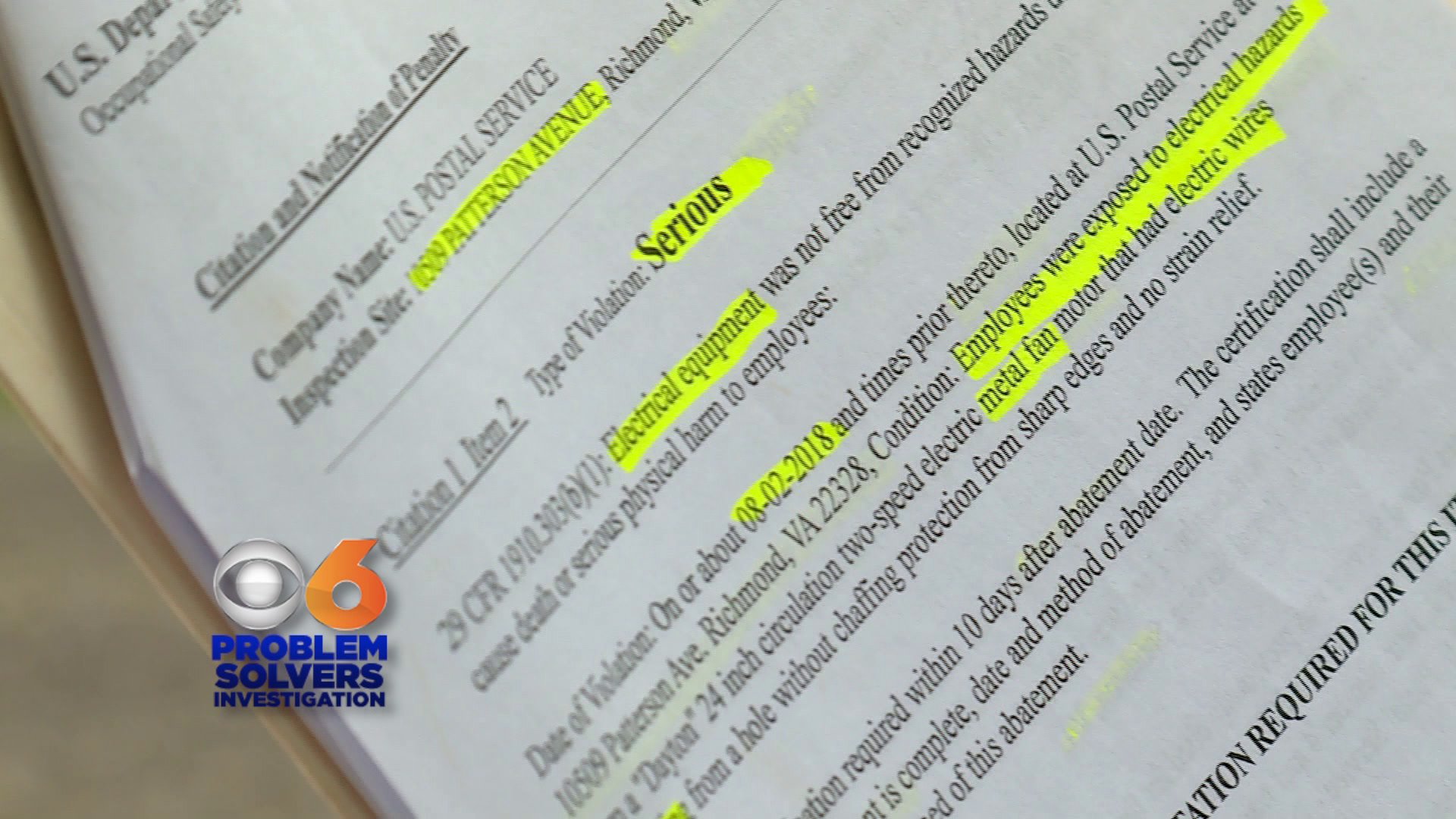 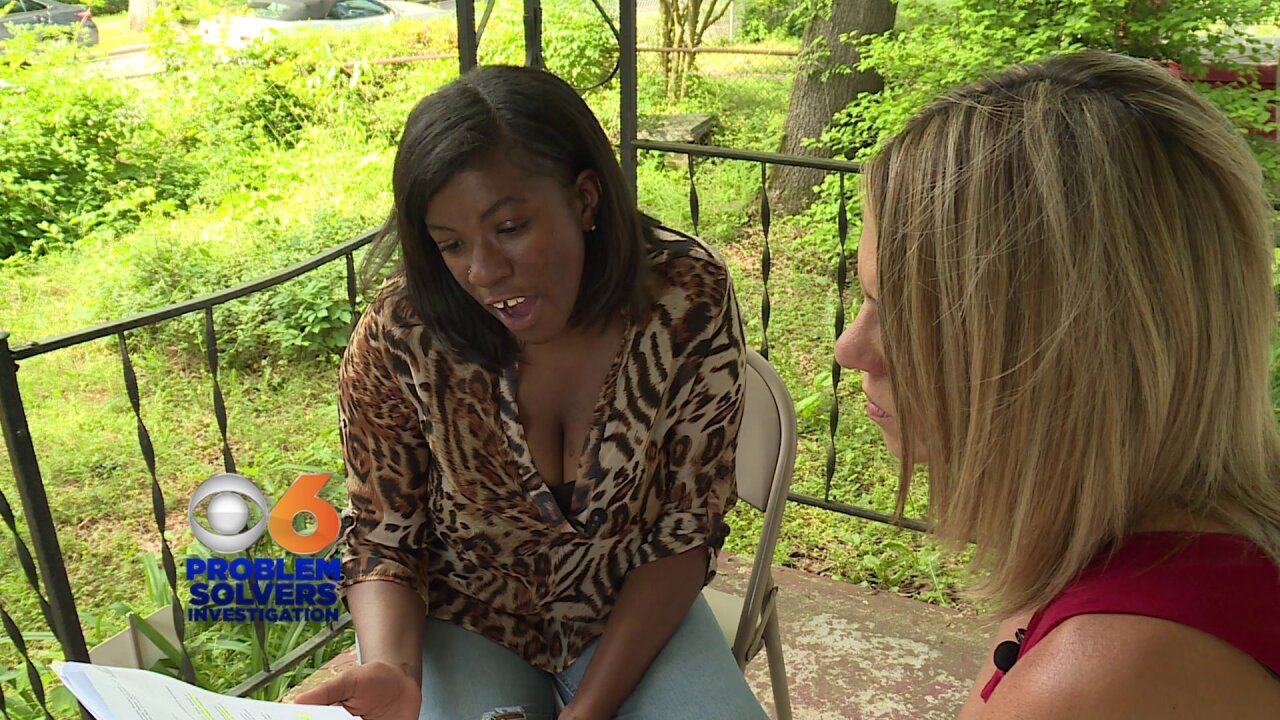 RICHMOND, Va. -- A CBS Problem Solvers investigation has revealed that since 2015, United States Postal Service offices in the Commonwealth have spent more than $461,000 in preventable fines to the Occupational Safety and Health Administration (OSHA.) More than $140,000 of that total, was paid out from Richmond-metro locations.

"I don’t think they have any regards for safety," former USPS employee Sigourdney Tabb said.

Tabb started her career as a mail carrier with the USPS in December 2018, at the 10509 Patterson Road location in Henrico County.

“Getting an offer at the post office, you think you`re set for life,” she said.

Tabb said she thought the job would safely take her into retirement, but two months after she started she quit because she said she wasn’t getting paid.

“I am still owed from my first two weeks of working with the United States Post Office,” said Tabb. “I just want my money, that's the bottom line, I just want what's owed to me.”

“In accordance with Postal Service policy, we do not comment on employee personnel matters, including employee pay disputes,” a USPS spokesperson said when asked about Tabb's situation.

While Tabb works to recover the hundreds she said she`s still owed, CBS has uncovered the violations that led to hundreds of thousands of dollars payouts by USPS to OSHA which is under the U.S. Department of Labor.

The Patterson Avenue office, where Tabb was employed, is listed on OSHA’s list of “high penalties by state.”

“Everything they have in there is kind of hazardous,” said Tabb.

The “serious” violations stated, “electrical equipment was not free from recognized hazards that were likely to cause death or serious physical harm to employees,” and “the employer did not assess the workplace to determine if hazards are present, or are likely to be present which necessitate the use of personal protective equipment.”

The report indicated, “employees were exposed to electrical hazards from a 'Dayton' 24-inch circulation two-speed electrical metal fan motor that had electrical wires protruding from a hole without chaffing protection from sharp edges and no strain relief.”

Additionally, “employees were exposed to falling parcel that was received on improperly stacked or displaced palletized delivery shipments from an Amazon contractor without the use of personal protective measures preventing or protecting employees from the struck-by-hazards.”

The location also had a repeat violation that explains that “employees were exposed to fire and electrical hazards from daisy-chained extension cords and surge protectors under the scanner battery charging area.”

The report stated that USPS was previously cited twice for this same violation at its Sandston location, at 5801 Technology Boulevard. That location, CBS 6 learned, was fined a total of $228,647 since 2015 and settled with OSHA for $118,140.

Tabb said she has made repeated calls and received part of the money owed to her, but was still out close to 20 hours.

CBS 6 reached out to the postal service.

A spokesperson said, “In accordance with Postal Service policy, we do not comment on matters in litigation or settlements, except to say that safety and safe work practices are of paramount importance to the Postal Service.”

CBS 6 inquired about the frequency of OSHA inspections. A Department of Labor (DOL) spokesperson provided the following information;

There are different types of compliance inspections that could determine how often OSHA conducts inspections at a particular workplace.

Programmed Inspections – are inspections conducted of randomly selected workplaces determined to be engaged in particularly hazardous types of work according to their “North American Industry Classification System” NAICS Code or on a National or Regional Emphasis Program. For instance, Maritime, Trenching, Construction, etc.

Complaint Inspections – are conducted after an employee files a formal complaint of alleged workplace safety or health hazard with OSHA.

Fatality/Accident Inspections – are conducted after OSHA receives notice from the employer of a workplace fatality or an accident resulting in the hospitalization of an employee. OSHA also takes notice of media reports, and we may investigate accidents that do not result in any fatalities or hospitalizations.

Imminent Danger Inspections – are conducted when OSHA receives a report that a condition of imminent danger exists at a workplace.

The USPS is an independent agency of the executive branch of the U.S. federal government that receives tax subsidies. The DOL said the penalties go to the US Treasury General Fund.

“I just don’t think they care,” said Tabb. “I think because they’re the government they feel like they can do you that way.”