RICHMOND, Va. -- Damage reports are coming in after a cold front triggered a powerful line of storms that prompted numerous tornado warnings for parts of Virginia Friday.

Significant rain fell, which will lead to flooding issues in the coming days. Most of the storm damage came from strong winds, as gusts neared 70 mph.

The Richmond Metropolitan area was fortunate enough to have only dealt with some wind damage and heavy rain showers.  However, some of the surrounding areas dealt with the worst of the storms. 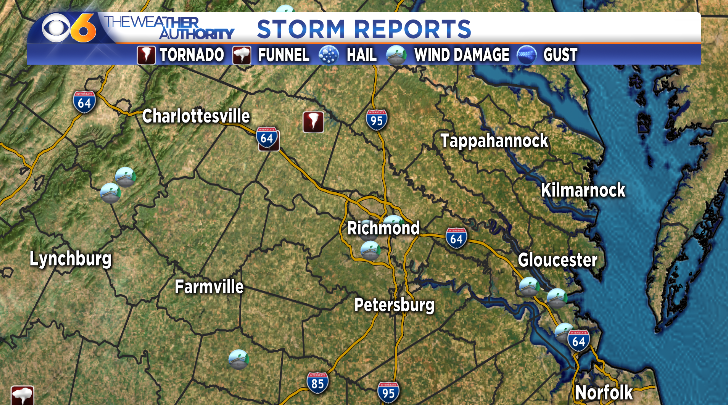 A tornado was confirmed by a trained spotter at 8:12 p.m in the 6200 block of Frederick Hall in Louisa County. Within that storm, there were power flashes which is common in a tornado event.

Another possible tornado touched down in Brunswick County near South Hill around 6:50 p.m. There were reports of a tree on a home and the tops of some trees twisted off.

Additionally, a tornado touched down in southwest Virginia in Franklin County just before 11 a.m. That storm left two people with minor injuries, destroyed a mobile home and caused major damage to another home along Windy Ridge Road in Sydnorsville.

In the Richmond Metropolitan area, there are reports of wind damage and down trees from the first round of storms in the early afternoon.

Did you have any storm damage where you live? Share your photos and videos on the WTVR CBS 6 Facebook page.