LOUISA COUNTY, Va. -- The Louisa County Sheriff’s Office is bridging the gap between first responders and those with disabilities with a new program inspired by a local middle schooler who has autism.

12-year-old Landon Withrow, wrote the department a two-page letter last summer explaining his disability as part of his application for the “Law Enforcement Adventure Program.”

“I think that I should be selected for the Law Enforcement Adventure Program not only to bridge the gap between autistic people and police, but also for me to be able to feel more comfortable around police,” Landon wrote.

“Here is one thing about autism, my autism affects the way my brain works causing me to think and process things differently than a typical human brain would,” he explained. “Many autistic people are scared of the police, including me,” Landon went on to explain.

“When I saw this letter it just basically warms your heart,” said Louisa County Sheriff’s Major Donnie Lowe. “I thought this was such a great idea and a great letter.” 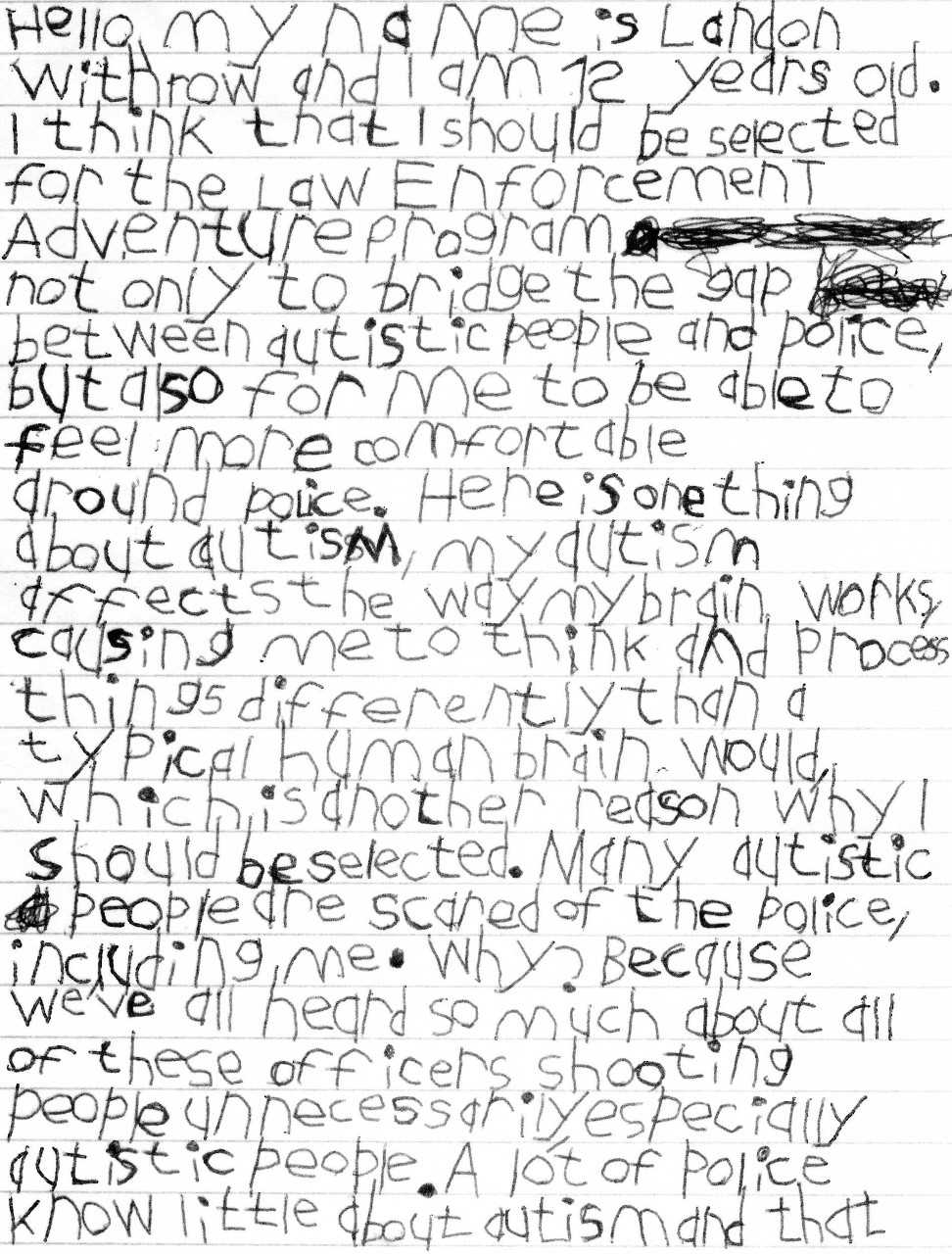 The department was so moved by Landon’s letter, it not only accepted him into LEAP, it launched Project First Responder.

The first of its kind program for the area, assist first responders by allowing family members or caregivers to provide information about their loved ones. Details about proper interaction and care, where the individual lives and what car they are associated with is electronically stored.

“We log it into our CAD system it’s very private,” said Major Lowe. “We keep a record of all the individuals in the program and we call them a pop up. Anytime an officer goes to those houses or a first responder there will be a note in there that will alert whoever is going to that address about the conditions.”

The sheriff’s office says, “Learning to interact with first responders is critical. It is just as essential for first responders to understand how to effectively deal with our citizens who are part of the autism, Alzheimer's, Intellectual & Development Disabilities (AAIDD) community. This is the reason Louisa County Sheriff's Office started Project First Responder; to begin to break the misguided communication between law enforcement and the AAIDD community. It is imperative that all entities involved learn to work together to make these interactions safe, successful and productive.”

“There’s been a lot on the news about police misunderstanding autistic people and shooting them and it’s scary for me because I’m worried that’s going to happen to me,” said Landon.

Landon wrote, “A lot of police know little about autism and that can be quite a problem because the officer could think that the autistic person is not listening or is refusing, or is being rude or mean. We aren’t. We just have trouble communicating with other people, understanding, and controlling our feelings.”

“Officer rolls up on the scene has a shiny badge, got a gun all that stuff they may come up and want to touch it they may just be scared of the officer and try to run and the officer doesn’t know what’s going on it’s very very important these officers understand,” said Lowe.

“You have an individual on that scene that you don’t understand you can misinterpret their actions and that can be in some cases deadly and it can also set you down the wrong path of what you are trying to accomplish. The more we understand who is on that scene and how to treat them how to act it’s best for everybody,” Lowe added.

The department is working with the Piedmont Regional Education Center or PREP to develop training that will be law enforcement specific.

“This will be a mandatory training program for all deputies to give them some resources training education on how to deal with the unusual cases when you do have somebody with a disability that could be misinterpreted by law enforcement,” said Lowe.

Landon was the first to enroll in Project First Responder.

“I want people who have a disability like I do and me to be safe and feel safe.” said Landon. “I think I’ve almost accomplished that. I feel like we’re being more understood there’s more being done and we’re being treated better. I feel very very special about this it makes me feel really special.”

“I’m just hoping it will make it much easier for us to be able to encounter police and let’s hope we don’t need to if we do let’s hope that they can understand how to communicate with us and know what does and does not bother us,” said Landon.

Landon says he no longer has a fear of law enforcement and he feels like the Louisa County Sheriff’s office has a better understanding of those with disabilities.

“There’s nothing wrong with us,” said Landon. “We are different, we are misunderstood but different isn’t bad it never will be different’s a good thing.”

“There’s a lot of people who need help, since I am already speaking for myself I have room for a few more,” said Landon.

To enroll in Project First Responder can either fill out and submit the "Voluntary Autism, Alzheimer's / Intellectual & Developmental Disabilities Informational Form" online Online AAIDD Application Form or download Download AAIDD Application Form the form and mail or bring it to the Louisa County Sheriff's Office.

CBS 6 reached out to area law enforcement agencies. Most Sheriff’s Offices participate in Project Lifesaver, which assists law enforcement with locating individuals with cognitive disorders who wander. In addition to Project Lifesaver, the Hanover Sheriff’s Office says they have autism instructors who teach awareness to officers as part of their training and all receive Crisis Intervention Training. Louisa County is the first in the area to expand with Project First Responder. The Chesterfield County Police Department says it is looking into a similar initiative.