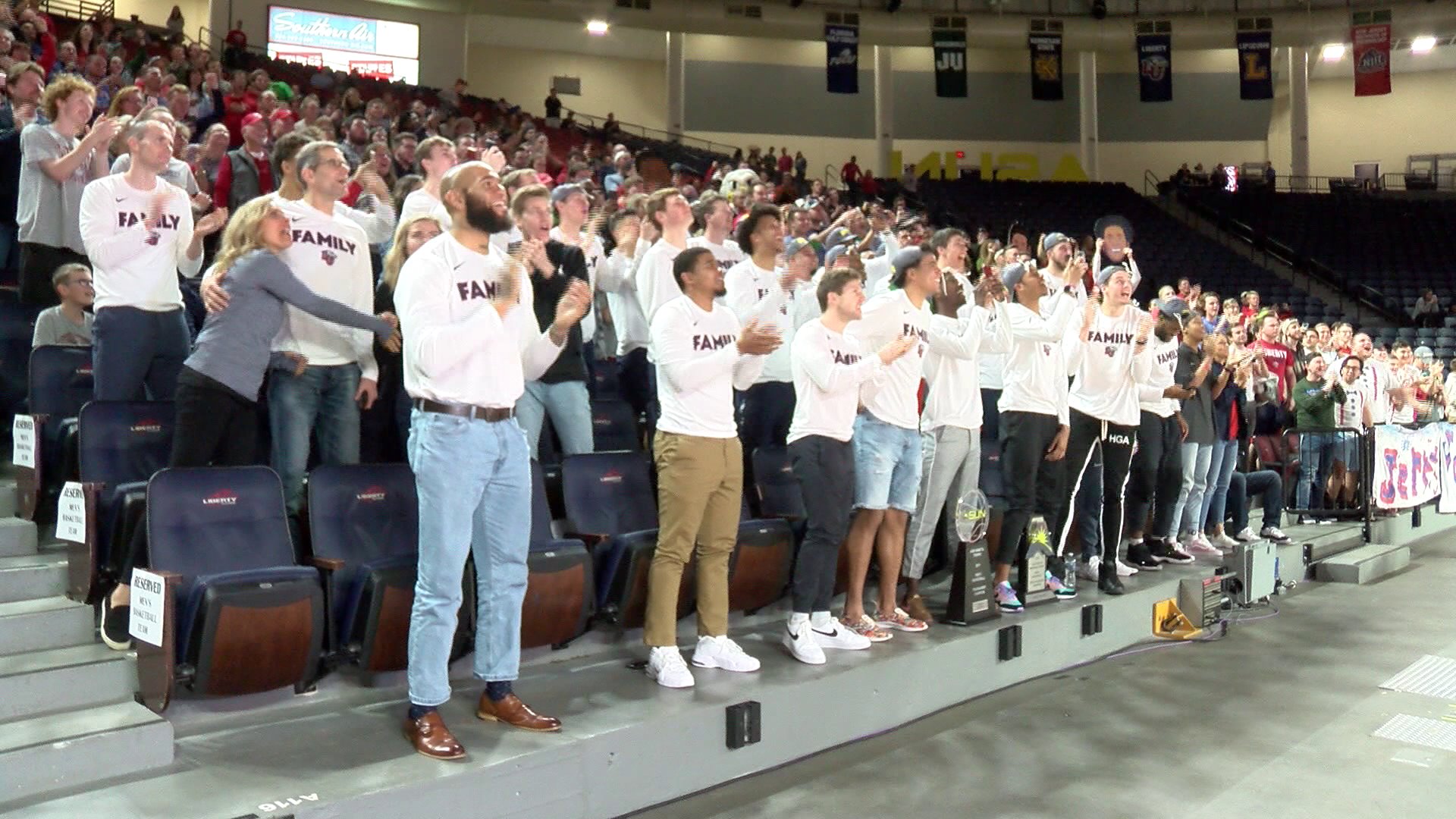 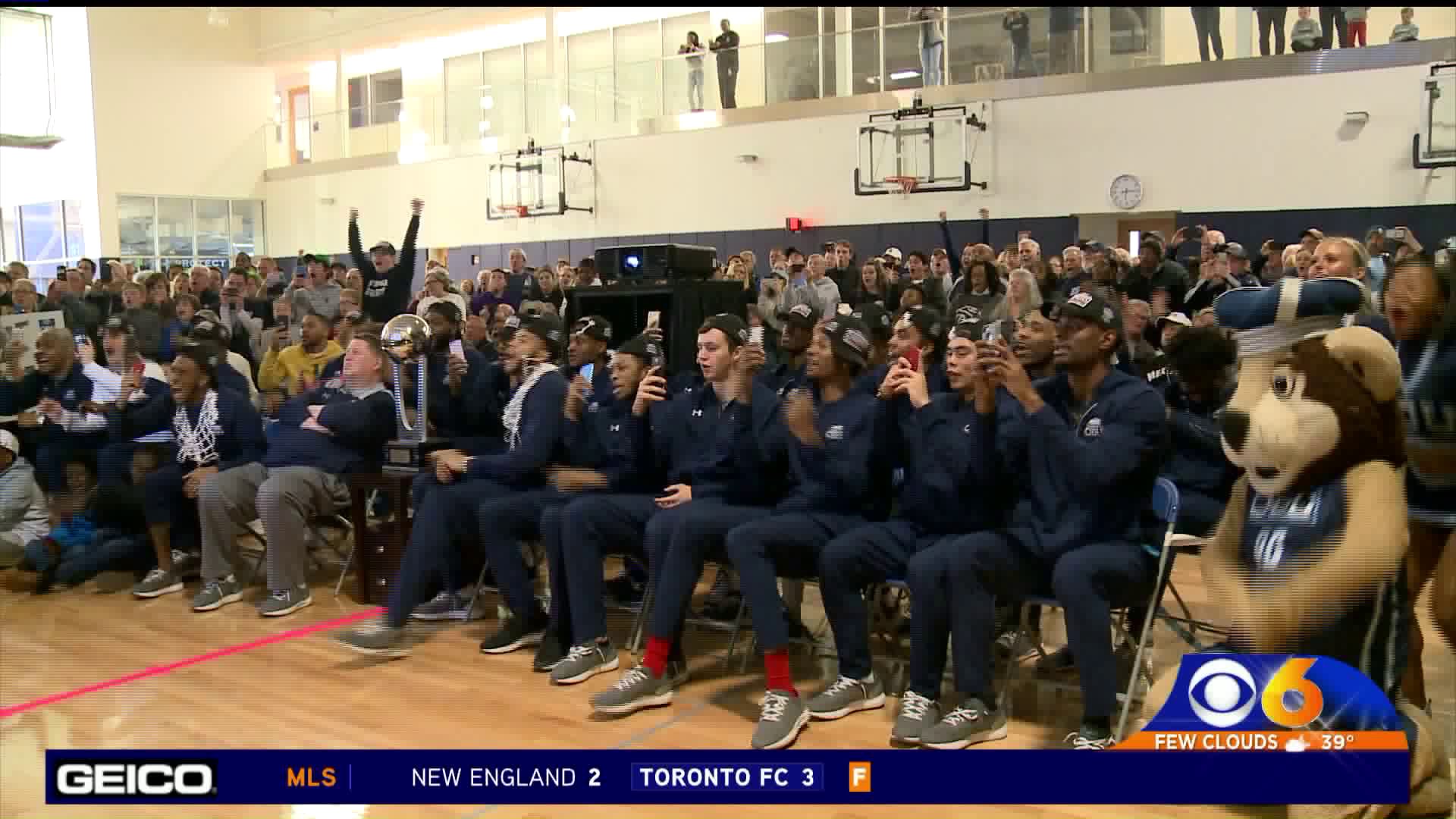 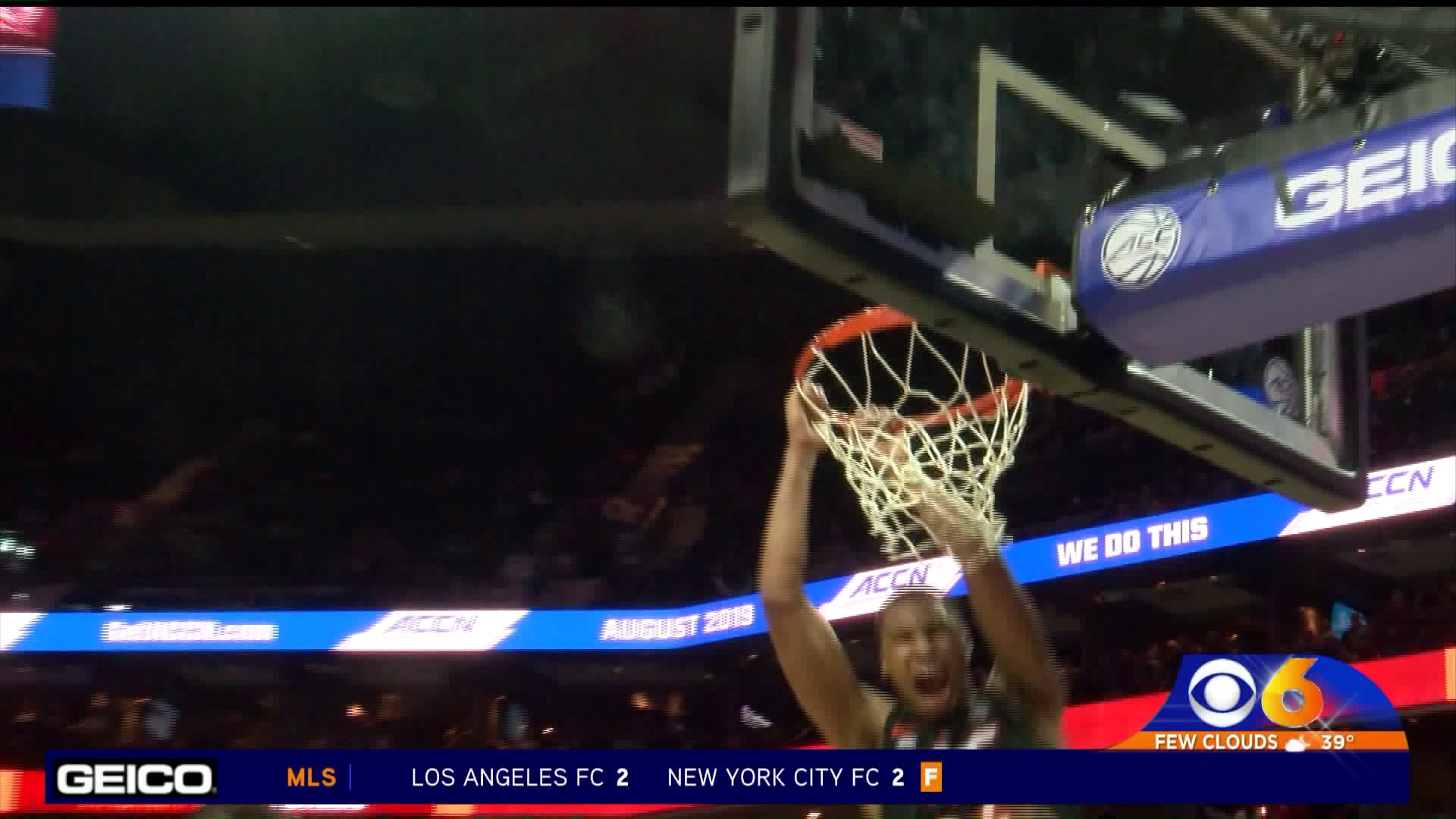 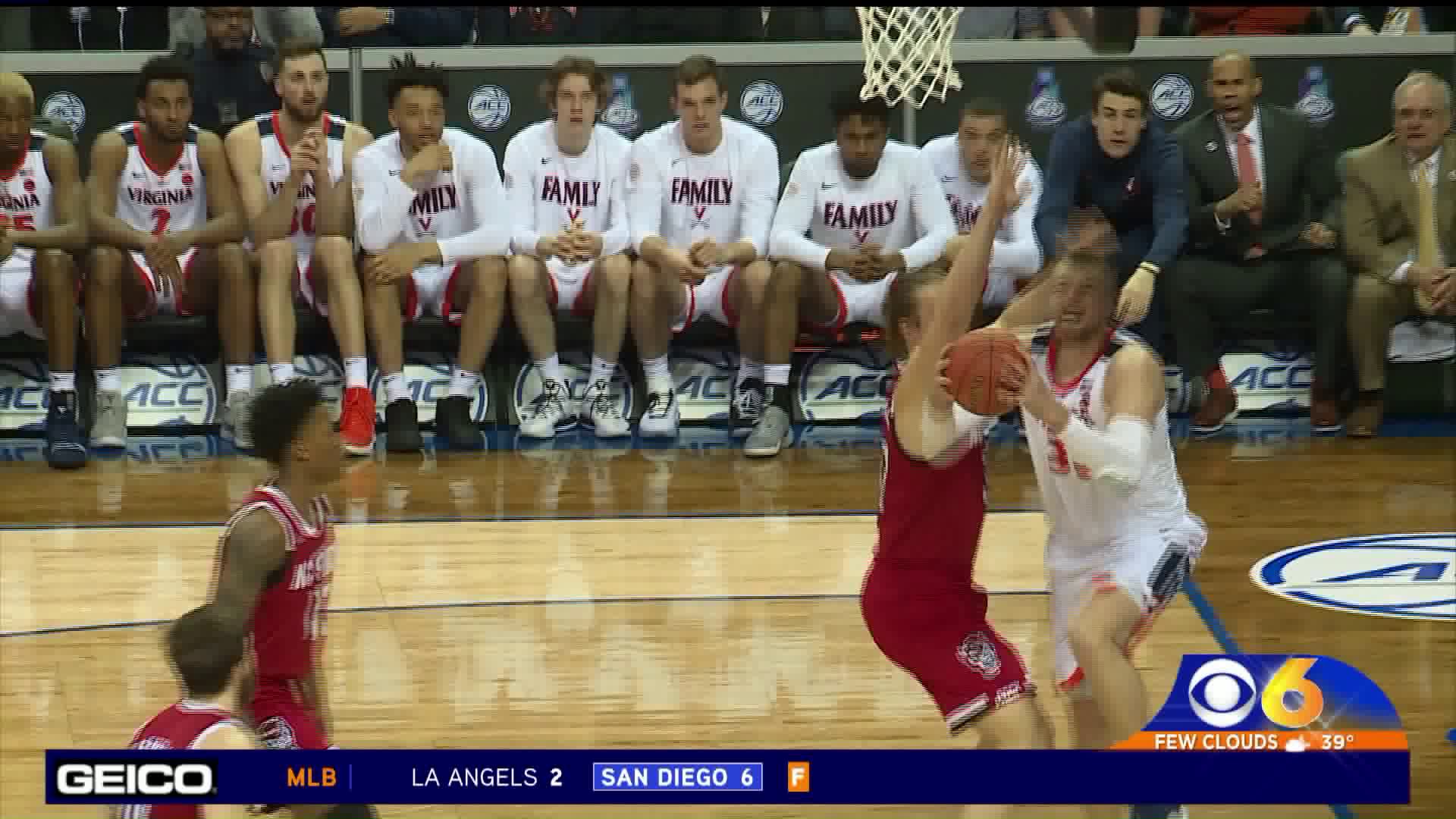 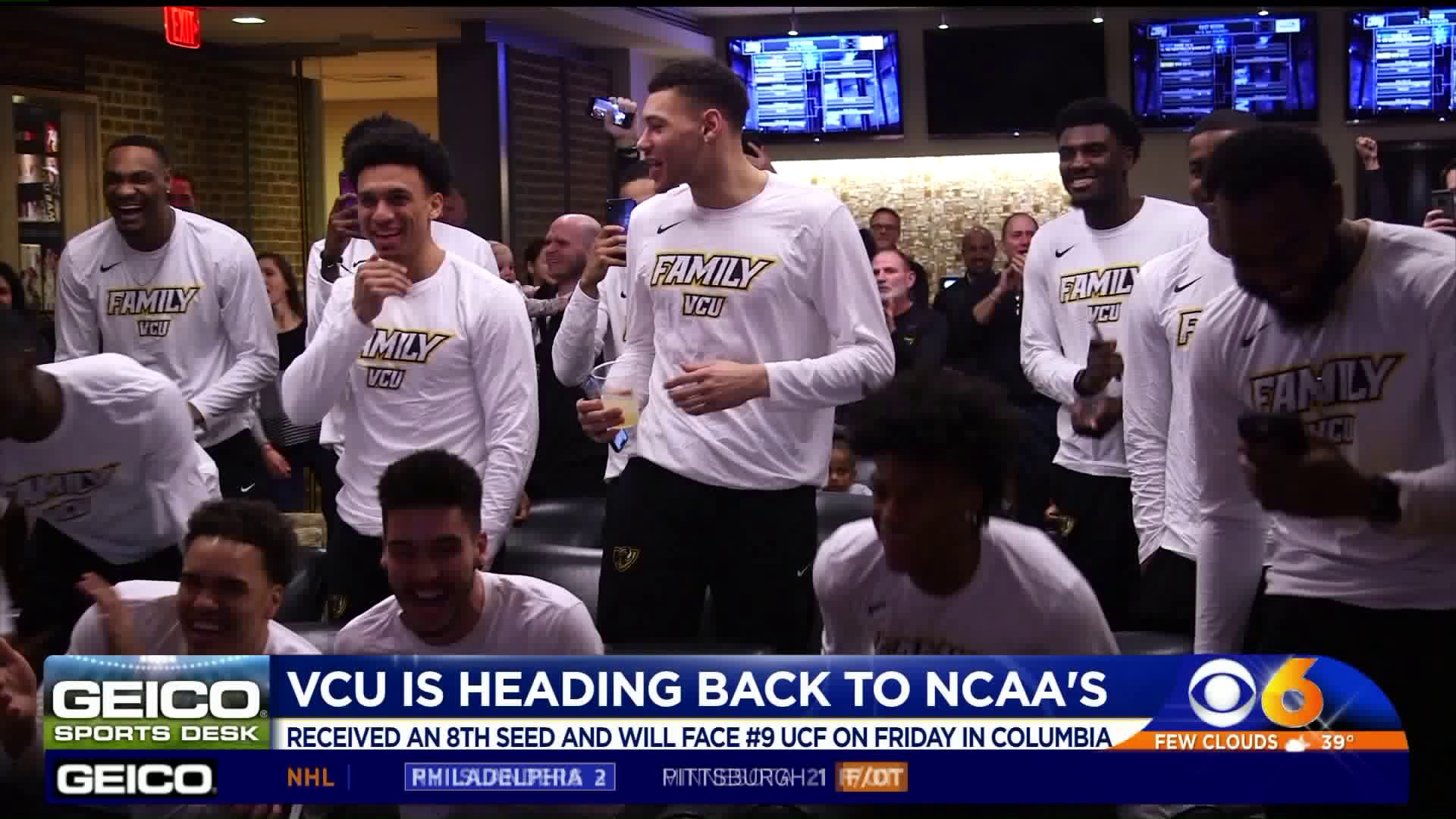 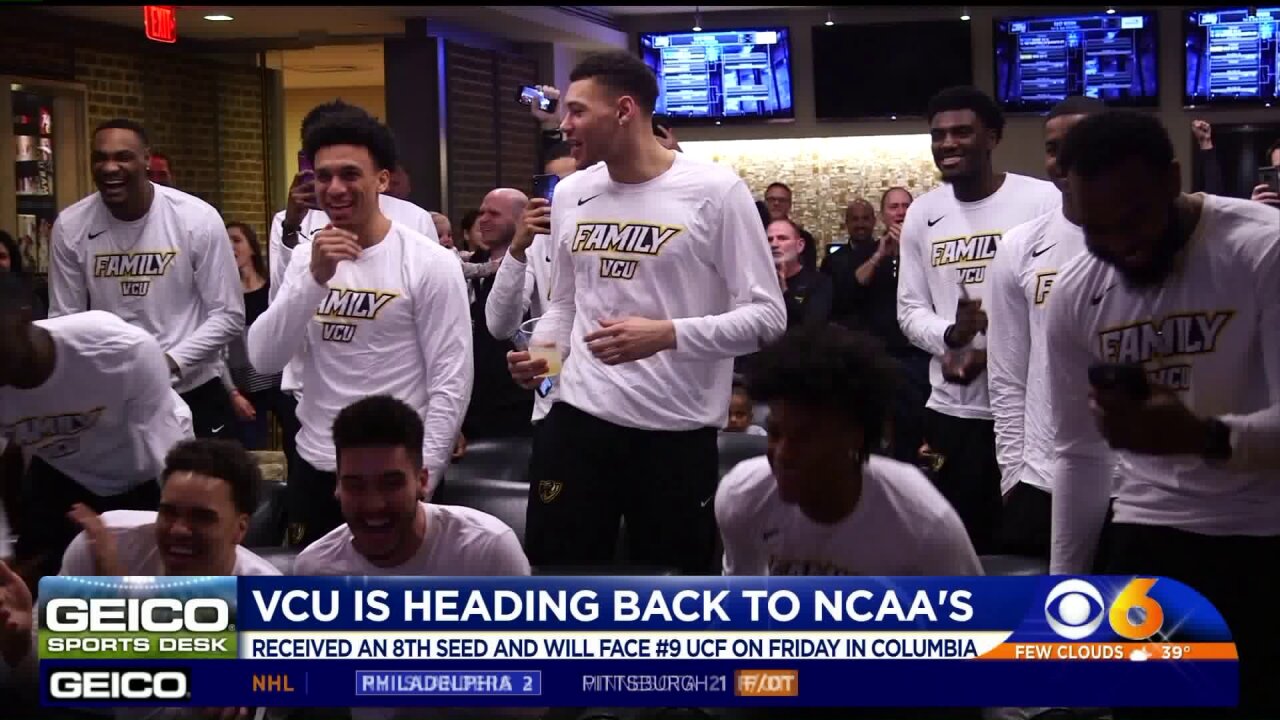 RICHMOND, Va. -- Five college basketball teams from Virginia are dancing in this year’s NCAA tournament, including Virginia Commonwealth University, the University of Virginia, and Virginia Tech.

The VCU Rams men’s basketball team are a #8 seed and will play #9 seed University of Central Florida Friday in Columbia, S.C. as part of the East Region. Should VCU win, #1 Duke likely awaits.

WE’RE DANCING!! We will be an 8-seed and play Central Florida Friday in Columbia, S.C. #⚫️🔶🐏💪 #ThisIsRamNation #LetsGoVCU #MarchMadness2019 pic.twitter.com/BppdLVgCJ2

VCU shattered expectations this season by winning the Atlantic 10 regular season title. The Rams, led by A-10 Coach of the Year Mike Rhoades, were predicted to finish seventh in the conference in the preseason poll.

With a 25-7 overall record and a 16-2 league record, the Rams boast one of the top defenses in the country, only allowing 61.2 points per game.

The Rams hold impressive wins over Temple, Hofstra, Texas and a season sweep of Dayton. VCU also narrowly lost to UVA by nine points in a game where they led most of the second half.

The team is led by junior guard Marcus Evans who averages nearly 14 points per game and was named to the A-10 All-Conference First Team and All-Academic Team. Evans went down with a left knee injury in their quarterfinals loss in the A-10 tournament. The injury was diagnosed as a deep bone bruise. There was no structural damage.

CHARLOTTESVILLE, VA - DECEMBER 09: Marcus Evans #2 of the VCU Rams shoots over Kihei Clark #0 and De'Andre Hunter #12 of the Virginia Cavaliers in the first half during a game at John Paul Jones Arena on December 9, 2018 in Charlottesville, Virginia. (Photo by Ryan M. Kelly/Getty Images)

Evans is expected to be ready to play in the NCAA tournament, according to a team spokesperson.

After missing the NCAA tournament in 2018, breaking a seven-year streak, the Rams are looking to regain their mojo in March and begin a new tournament streak.

The Virginia Cavaliers are a #1 seed and will play #16 seed Gardner Webb University in the South Region. Virginia will play Friday in Columbia, South Carolina.

Look Hoos No. 1⃣@UVAMensHoops is the top seed in the South region heading in to #MarchMadness!#GoHoos #Wahoowa 🔶🔷 pic.twitter.com/ZQ2gfzYyiH

The Cavaliers rebounded, after a historic first-round exit from the NCAA tournament last season, with a 28-3 record. Virginia won a share of the ACC regular-season title. UVA has been a model of consistency under head coach Tony Bennett and have captured a #1 seed in the NCAA Tournament for the fourth time in six years.

They suffered their only losses of the season to the Duke Blue Devils and to the Florida State Seminoles in the ACC Tournament semi-finals. After a spectacular regular season, Bennett was named ACC Coach of the Year for the fourth time in his career and for the second consecutive year.

On the floor, the Cavaliers are loaded with three of the best players in the ACC.

CHARLOTTESVILLE, VA - JANUARY 15: De'Andre Hunter #12 of the Virginia Cavaliers shoots past Kerry Blackshear Jr. #24 of the Virginia Tech Hokies in the second half during a game at John Paul Jones Arena on January 15, 2019 in Charlottesville, Virginia. (Photo by Ryan M. Kelly/Getty Images)

The Virginia Tech Hokies are a #4 seed and will play #13 seed St. Louis Friday in San Jose as part of the East Region.

We're the No. 4 seed taking on Saint Louis this Friday in the East Region in San Jose

The Hokies are returning to the NCAA tournament for the third year in a row under head coach Buzz Williams. After first round losses the last two years, Tech is looking to capitalize off a strong season as one of the best teams in the Atlantic Coast Conference.

The Hokies dominated their non-conference schedule winning 11 of 12 games, including key wins over then-ranked Purdue and Washington. During their tough ACC schedule, the Hokies went 12-6 with signature wins over Syracuse and Duke.

BLACKSBURG, VA - JANUARY 26: Justin Robinson #5 of the Virginia Tech Hokies celebrates during the game against the Syracuse Orange at Cassell Coliseum on January 26, 2019 in Blacksburg, Virginia. (Photo by Lauren Rakes/Getty Images)

The Buzz Williams led club finished the regular season fifth in the ACC, before losing in the quarterfinals of the ACC tournament to Florida State.

On Sunday, Williams tweeted injured Hokies star Justin Robinson would be available for the tournament. Robinson was injured January 30. The Hokies were 7-5 without him in the lineup.

The Old Dominion Monarchs are a #14 seed and will play #3 seed Purdue in the 2019 NCAA Tournament. The Monarchs will play Thursday in Hartford, Connecticut.

We’re headed to Hartford! We will take on Purdue this Thursday in the @NCAA Tournament. 🎟🦁🏀 #MonarchMadness #ODUSports pic.twitter.com/gdt67uzrJF

The 26-8 (13-5) Monarchs struggled to open the season, losing three of their first five games.

As the season progressed, so did their play.

Among the highlights of their non-conference schedule was a victory at then-No. 25 Syracuse and a win over the A-10 regular season champion VCU Rams.

Their turnaround and success led to head coach Jeff Jones being named the Gene Bartow Coach of the Year (C-USA Coach of the Year). ODU also had one of the best defenses in the country, ranked in the top 10 in scoring defense.

On the floor, ODU is led by senior guard and Conference USA Player of the Year B.J. Stith. Stith picked up the top individual honor after averaging more than 17 points per game along with 7 rebounds.

The Liberty University men’s basketball team is a #12 seed and will play #5 seed Mississippi State in the East Region. The Flames will play Friday in San Jose, California.

Watch Liberty take on Mississippi State at 7:27 p.m. on truTV.

Get your dancing shoes on @LibertyMBB! The Flames draw Mississippi State out of the SEC in the first round of the NCAA Tournament! #ASUNMBB #RiseWithUs #MarchMadness pic.twitter.com/ghLzTFoY7j

Liberty University thrived during their first season in the Atlantic Sun Conference, winning 14 of 16 conference games. The team also tied a school record with 28 wins this season, with an impressive 16-1 record at the Vines Center in Lynchburg.

The Flames earned an automatic bid to the NCAA tournament after beating top-seed and defending champion Lipscomb University in the ASUN Championship game last week.

This is the Flames fourth ever tournament appearance and first since 2013.

They are led by junior forward Scottie James who averages 13 points and nearly 9 rebounds a game and senior guard Lovell Cabbil Jr. who averages 11 points per game.

The 2019 Men’s Final Four and National Championship will be broadcast on CBS 6 April 6 and 8.