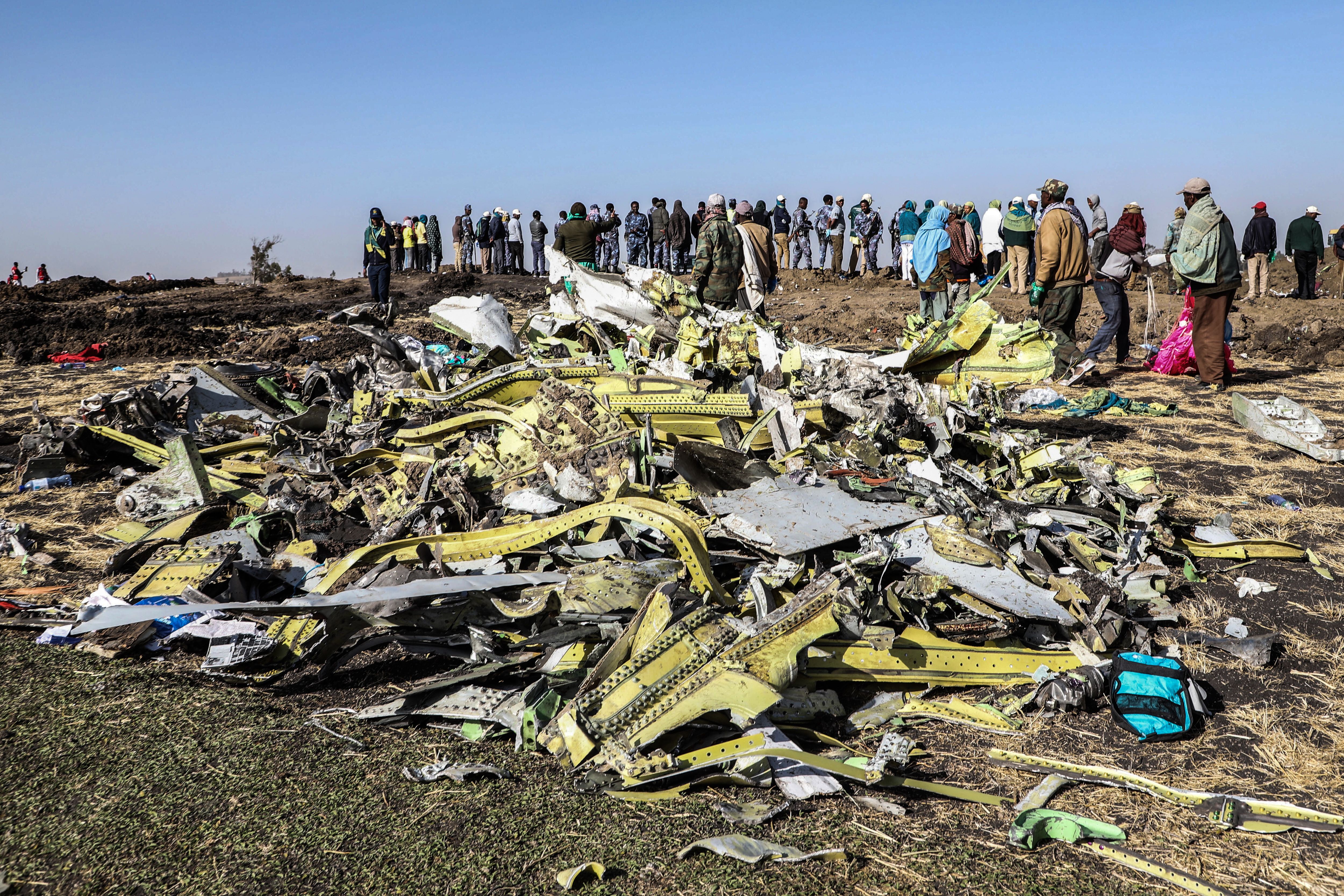 ADDIS ABABA, Ethiopia –Two flight data recorders from Ethiopian Airlines Flight ET302 have been found, as airlines around the world ground Boeing 737 MAX 8s like the one which crashed Sunday, killing all 157 people on board.

The plane’s Digital Flight Data Recorder (DFDR) and Cockpit Voice Recorder (CVR) were recovered from the wreckage Monday, Ethiopian Airlines said in a statement. They will enable investigators and experts piece together the last moments of the flight, and should help explain why the new plane crashed.

Flight ET302 to Nairobi had just taken off from the Ethiopian capital of Addis Ababa Sunday when it reported technical problems and asked for permission to turn back. It crashed shortly after.

With investigations underway, multiple countries have suspended use of Boeing’s new 737 MAX 8 aircraft amid concerns about its safety.

On Monday, The Civil Aviation Administration of China ordered that all domestic Boeing 737 MAX 8 jets be out of the air by 6 p.m. local time, due to its principle of “zero tolerance for safety hazards.”

China has one of the world’s largest fleets of Boeing 737 MAX 8, operating 97 of the planes, according to China’s state-run media.

The move was followed by an announcement from Ethiopian Airlines that the carrier had grounded its fleet of Boeing 737 MAX 8 jets as an “extra safety precaution.” Cayman Airways also said on Monday it was grounding both of its “new Boeing 737 MAX 8 aircraft … until more information is received.”

Indonesia’s Ministry of Transportation also ordered all Boeing 737 MAX 8 planes to be grounded Monday, “to ensure that aircraft operating in Indonesia are in airworthy condition.”

Sunday marked the second time in less than six months that a new Boeing aircraft had crashed just minutes into a flight. A Lion Air Boeing 737 MAX 8 flight went down over the Java Sea in last October, killing all 189 people on board.

Both crashes are under investigation. There is no evidence of a link between the two, but similarities in the incidents have prompted caution among some airlines.

“Given in both air crashes, the aircrafts were newly delivered Boeing 737 MAX 8, and both accidents occurred during the take-off, they share certain similarities,” the Chinese administration said in a statement. It added that it would contact Boeing and the US Federal Aviation Administration to confirm “flight safety” issues before allowing the planes to fly again.

Mary Schiavo, a CNN aviation analyst and the former Inspector General of the US Transportation Department, called the two incidents “highly suspicious.”

“Here we have a brand-new aircraft that’s gone down twice in a year. That rings alarm bells in the aviation industry, because that just doesn’t happen,” she said.

State-owned Ethiopian Airlines is one of Africa’s leading aviation groups, and the continent’s largest carrier by number of passengers.

The Kenyan and Ethiopian governments announced a joint disaster response team on Monday to investigate the crash. Kenya’s Cabinet Secretary of Transport James Macharia described it as a “very complex investigation.”

In a statement Sunday, Boeing said it was “deeply saddened” to hear about the loss of life in the Ethiopian Airlines plane crash.

“A Boeing technical team will be traveling to the crash site to provide technical assistance under the direction of the Ethiopia Accident Investigation Bureau and US National Transportation Safety Board,” the statement said.

Tewolde GebreMariam, Ethiopian Airlines CEO, said at a press conference Sunday that the pilot had reported technical difficulties and had been given clearance to return to the Ethiopian capital.

An eyewitness told CNN they saw smoke coming from the plane before it crashed on Sunday.

GebreMariam said a routine maintenance check hadn’t revealed anything before takeoff. The pilot, Yared Getachew, was a senior Ethiopian Airlines pilot who had flown more than 8,000 hours. He had an “excellent flying record,” according to CEO Tewolde GebreMariam.

was a senior Ethiopian Airlines employee who had flown more than 8,000 hours and had an “excellent flying record,” he added.

“As it is a fresh incident, we have not been able to determine the cause. As I said, it is a brand new airplane with no technical remarks, flown by a senior pilot and there is no cause that we can attribute at this time,” GebreMariam said.

Speaking on Monday, Kenyan Transport Secretary Macharia said relatives of the victims would be given “the utmost attention,” including accommodation and flights to Ethiopia, if necessary.

The US National Transportation Safety Board said on Sunday it would be sending a team of four to assist in the investigation into the crash.

CNN aviation expert Richard Quest said while a “final determination” on the cause of the crash might be years away, information from the flight recorders should be retrieved within a matter of weeks.

Citizens of 35 countries were among the 157 people killed in Sunday’s crash, including 32 Kenyans, 18 Canadians, nine Ethiopians and eight passengers each from China, Italy and the United States.

The United Nations said 22 of its staff members were among the dead, including employees of the World Food Programme (WFP) the Office of the High Commissioner on Refugees and the Food and Agriculture Organization.

Not all victims have been named, but some details have been released.

Slovakian lawmaker Anton Hrnko announced Sunday that his wife and children, a son and a daughter, had been killed in the crash. “If you had known them, please think of them in a quiet memory,” the statement from Hrnko’s office said.

Kenyan Cedric Asiavugwa, a third-year student at Georgetown University in the US, was also among the victims, according to a statement from the university Sunday.

“The Georgetown family has lost a stellar student, a great friend to many, and a dedicated champion for social justice across East Africa and the world,” the school said.

Pius Adesanmi, a Nigerian-Canadian professor and author, quoted a poignant bible verse in a Facebook post before boarding the ill-fated flight.

“If I take the wings of the morning and dwell in the uttermost parts of the sea, even there your hand shall lead me, and your right hand shall hold me,” the verse, identified in the post as Psalm 139:9-10, reads.

The Ethiopian government expressed its “deepest condolences to the families,” in a statement from the office of Prime Minister Abiy Ahmed.

A man carries a piece of debris on his head at the crash site of a Nairobi-bound Ethiopian Airlines flight near Bishoftu, a town some 60 kilometres southeast of Addis Ababa, Ethiopia, on March 10, 2019. – A Nairobi-bound Ethiopian Airlines Boeing crashed minutes after takeoff from Addis Ababa on March 10, killing all eight crew and 149 passengers on board, including tourists, business travellers, and “at least a dozen” UN staff. (PHOTO: Michael TEWELDE / AFP)

People watch workers at the crash site of a Nairobi-bound Ethiopian Airlines flight near Bishoftu, a town some 60 kilometres southeast of Addis Ababa, Ethiopia, on March 10, 2019. – A Nairobi-bound Ethiopian Airlines Boeing crashed minutes after takeoff from Addis Ababa on March 10, killing all eight crew and 149 passengers on board, including tourists, business travellers, and “at least a dozen” UN staff. (Photo by Michael TEWELDE / AFP) (Photo credit should read MICHAEL TEWELDE/AFP/Getty Images)