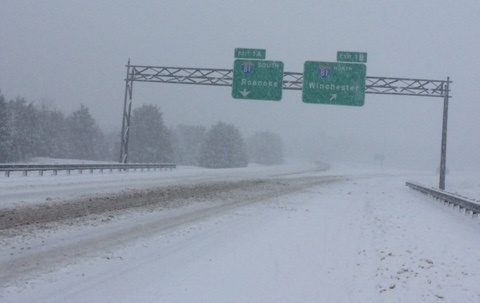 “From midnight to 8:45 a.m. Wednesday, VSP responded to 171 traffic crashes and 143 disabled vehicles,” a Virginia State Police spokesperson said. “Fortunately the majority of those crashes have only involved damage to vehicles and few injuries. State police have not worked any fatal crashes.”

As of 8:45 a.m., Virginia State Police troopers are currently responding to another 48 crashes and 18 disabled vehicles:

A multi-vehicle crash did close lanes on Interstate 95 north (near I-295) in Henrico.

“Virginia State Police responded to a multiple-vehicle crash at northbound I-95 at exit 84B [at approximately 6:51 a.m.],” a Virginia State Police spokesperson said. “This was four separate crashes involving a Toyota Tacoma, Volkswagen sedan, Honda sedan, and a tractor trailer. There was disabling damage to the Toyota, Volkswagen, and Honda. The tractor trailer sustained minor damage. The crashes involved property damage only and no injuries.”

No charges were placed and the crash remained under investigation.

If you must travel:

– Clear ALL snow and ice from the roof, trunk, hood and windows of your vehicle before you travel
– Use your headlights
– Drive for conditions – slow your speed
– Buckle Up
– Avoid distractions – put down the phone
– Know before you go – check road conditions before heading out at http://www.511virginia.org or download the VDOT 511 app.