The song lineup was heavy in hits from Maroon 5’s 2004 album “Songs About Jane,” with selections including “Harder to Breathe,” “This Love” and “She Will Be Loved.”

Despite rumors that Mick Jagger himself might appear to accompany Levine on the song, he did not join Maroon 5 for what turned out to be their closing song.

Instead, the band ended the set with a shirtless Levine showing off his tattoos and halftime show collaborators, sans SpongeBob. 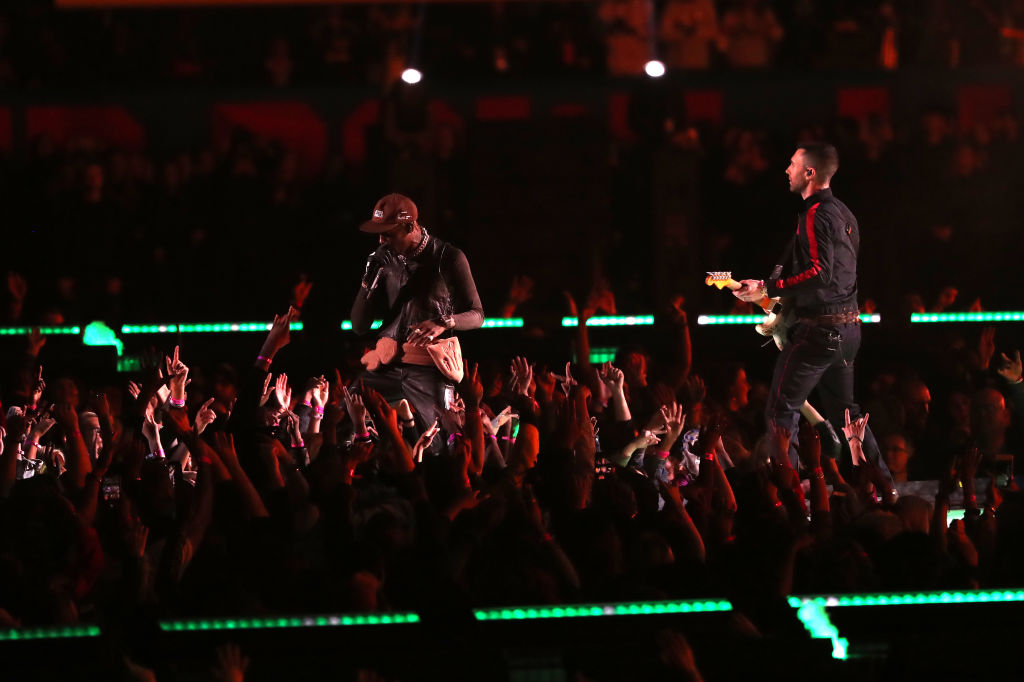 Not unlike the Oscars, the NFL reportedly had trouble getting someone to occupy one of entertainment’s biggest stages.

Artists like Rihanna and Cardi B reportedly turned down the gig in support of former quarterback Colin Kaepernick.

During the game, some celebrities and members of the public used #ImwithKap on social media to express their decision not to watch the Super Bowl.

“I will not be a spectator, viewer or supporter of the #SuperBowl today in protest of the @NFL’s racist treatment of @Kaepernick7 and its ongoing disregard for the health + well-being of all its players,” director Ava DuVernay wrote. “To watch the game is to compromise my beliefs. It’s not worth it. #ImWithKap”

Maroon 5, a harmless pop band, took the job in January and became the target of backlash for doing so.

Others wondered why in Atlanta — where, to quote uber-producer Jermaine Dupri’s song “Welcome to Atlanta,” “all the playas play” — a choice with local ties hadn’t been made.

The addition of Big Boi, who is more synonymous with his native Atlanta than Coca Cola and streets named “Peachtree,” to the performance roster, along with fellow rapper Scott, did little to appease critics.

Levine told Entertainment Tonight, an outlet that was granted exclusive access to the band after the group did not participate in a traditional press conference, that he spoke to “many people” before making the decision to perform but ultimately, “listened to myself.”

“No one thought about it more than I did. No one put more thought and love into this than I did,” he said.

And while some tweeted praise for Sunday’s halftime entertainment, in this politically polarized time, a beloved cartoon character and a shirtless Levine stalking the stage weren’t enough to win over every critic.