A mix of snow, sleet, freezing rain and rain will spread across the state over the next 24 hours

RICHMOND, Va. -- This winter storm will be very complex, including areas of sleet, freezing rain and plain rain at times for different parts of our viewing area.

A winter storm warning has been issued for much of Virginia, including the city of Richmond, western Henrico and western Chesterfield counties.  A winter weather advisory is in effect for areas south, east and southeast of Richmond, including eastern Henrico and eastern Chesterfield counties.  Far southeastern Virginia will see primarily rain, so no advisory covers that area.

Scattered snow and rain showers will move in from the west Saturday afternoon, with the threat for steadier precipitation increasing this evening and overnight.

While this will be mainly snow for areas well north and west of Richmond, the metro will begin to see a wintry mix of snow, sleet and freezing rain.  Areas well south and southeast of Richmond will transition to plain rain. 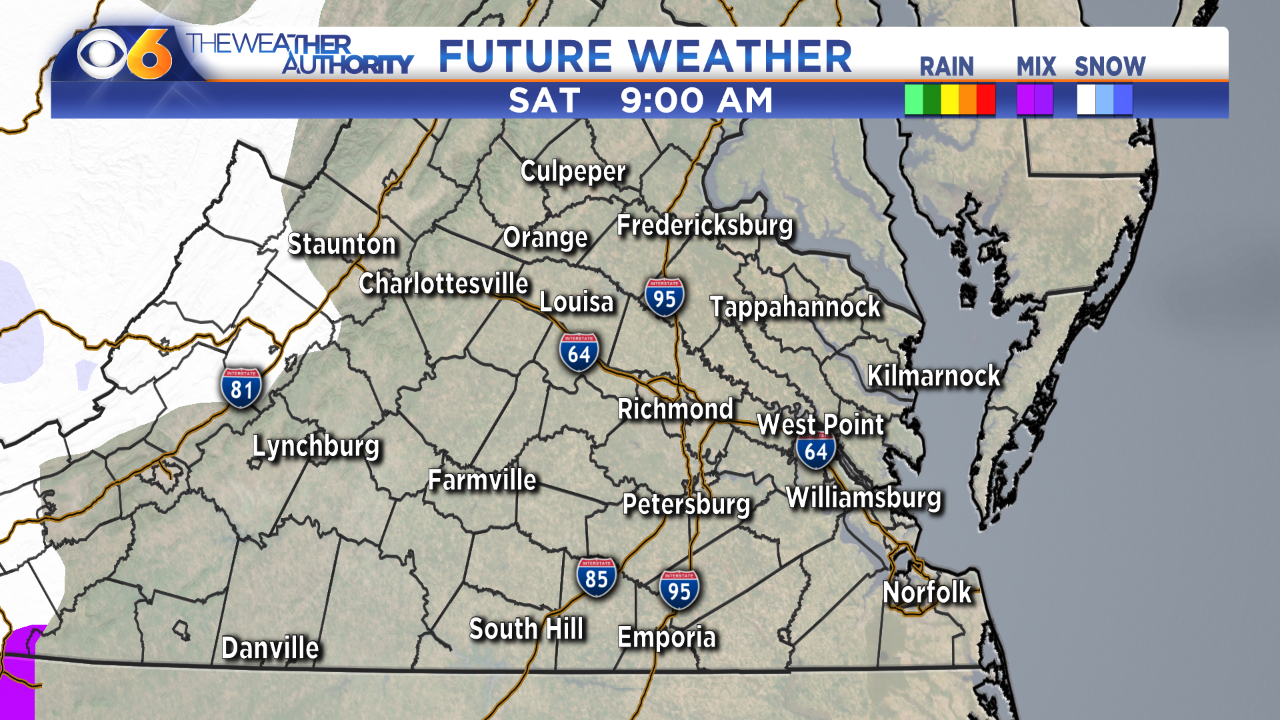 Colder air will wrap in later Sunday, changing any rain or mixed precipitation back to snow.  Snow showers will taper off late Sunday night, but there may be a few flurries early Monday morning.

There will be a wide range of weather across the CBS 6 viewing area.  It will be primarily mainly rain for far southeastern Virginia, and mainly snow for areas well north and west of Richmond.  In between, there will be varying amounts of snow, sleet (ice pellets), freezing rain (liquid rain that freezes on impact with the ground) and plain rain.

Freezing rain will cause some icing to occur, especially near and west of Interstate 85, where a glaze of ice is possible.  Some icing is also possible in the metro.  On this map, where there is a contour but no accumulation listed, that indicates a trace of ice possible.

As the storm exits Sunday night, final snowfall totals will be heaviest well north and west of Richmond.  The varying amounts of wintry mix and rain make the forecast across Richmond very difficult.  It does appear that there will be a large gradient over a short distance.

Downtown Richmond and areas southeast of the city will pick up 1-3" of snow.  Northwest of the city into northwestern Henrico county will have the potential for 4" or more of snow.  The heaviest amounts will occur far north and west of Richmond, where totals over 8" are possible.

Keep in mind that the wintry mix and rain may erode of some the initial snow accumulation.  After the mix and rain will be additional snow towards the end of the storm.  This means that while an area may pick up 4-5" of snow over the entire event, there may only be an inch or two on the ground when the storm is done.

Please continue to check our weather forecast page for frequent updates the rest of the weekend.