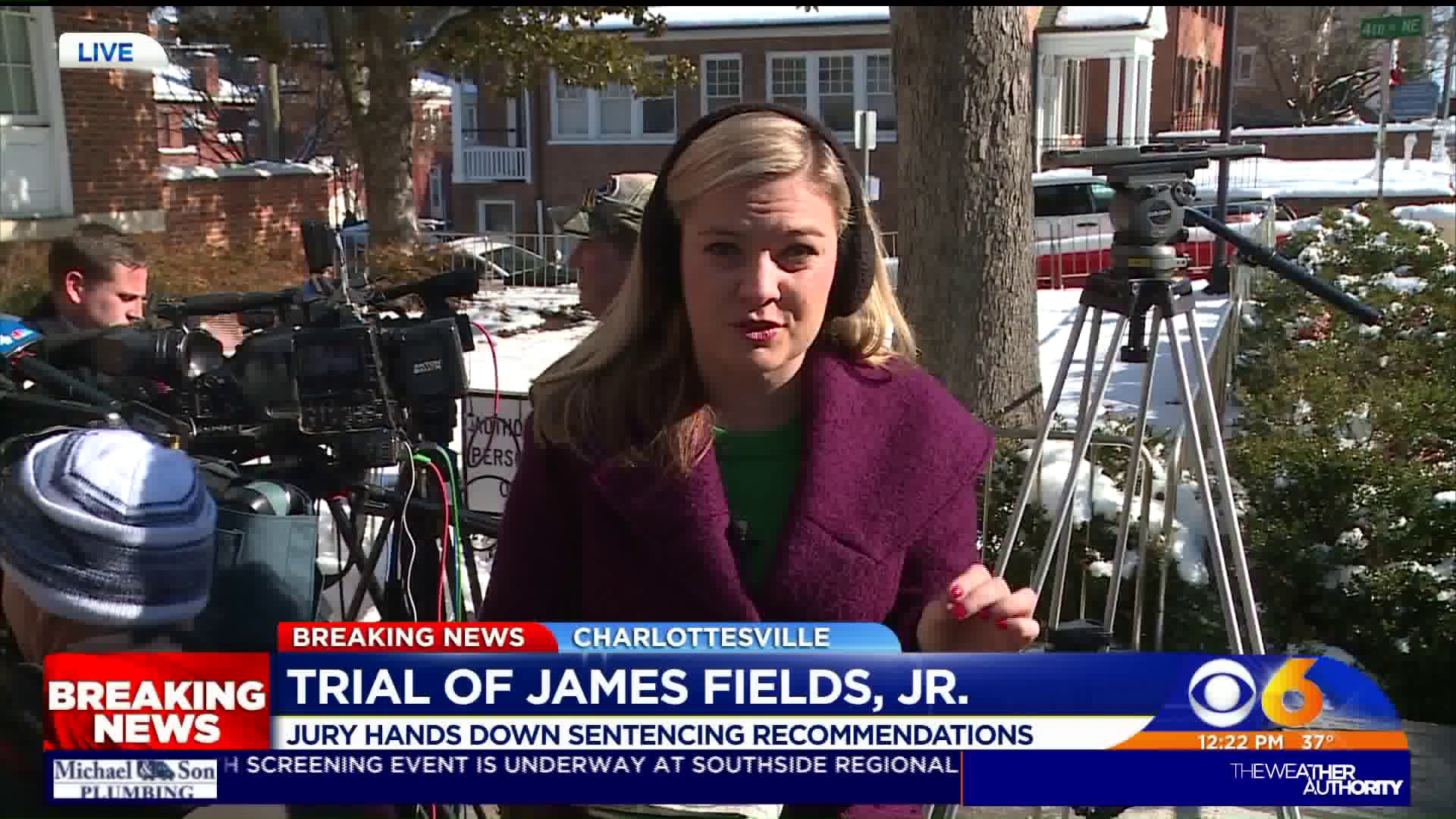 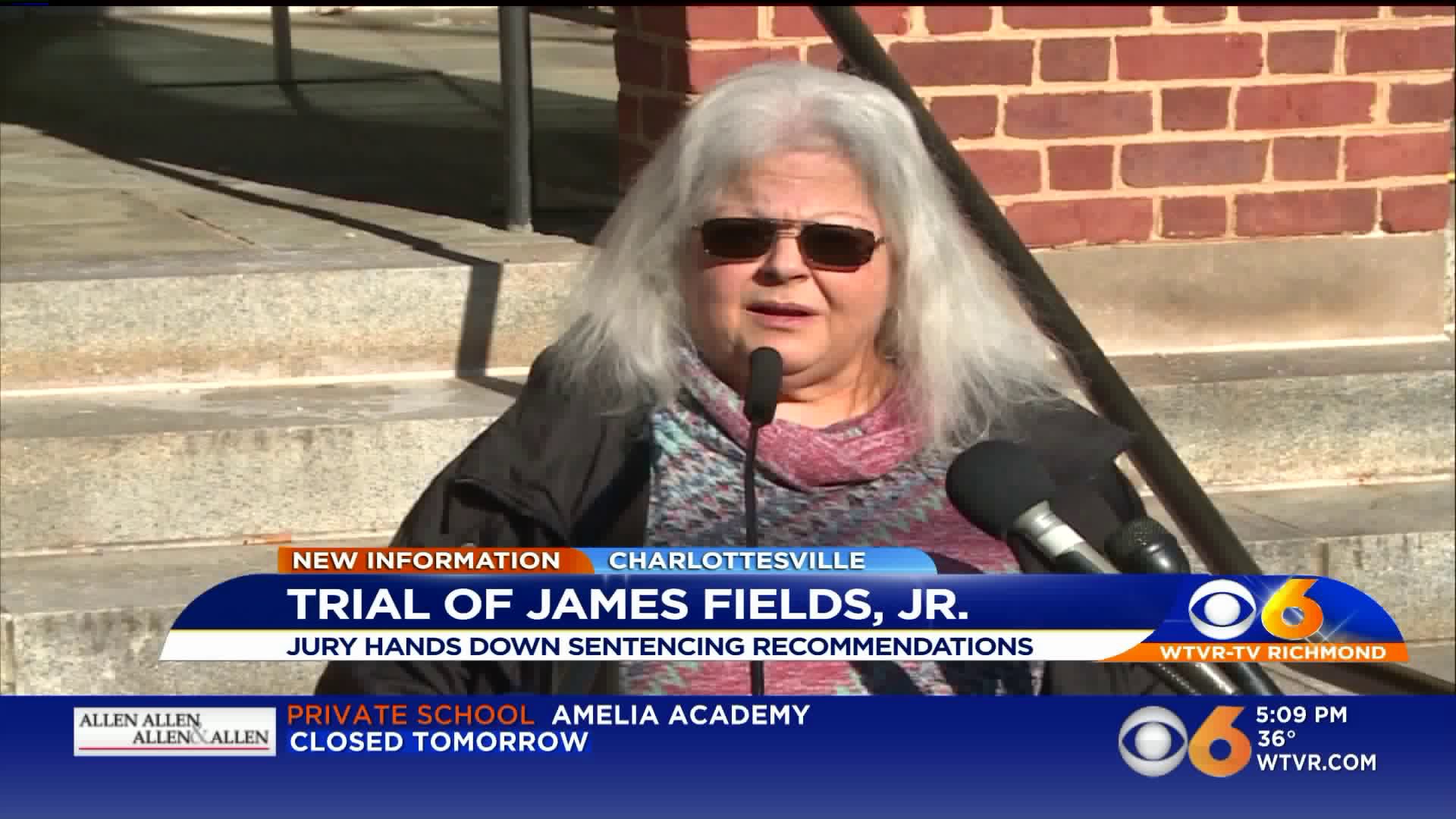 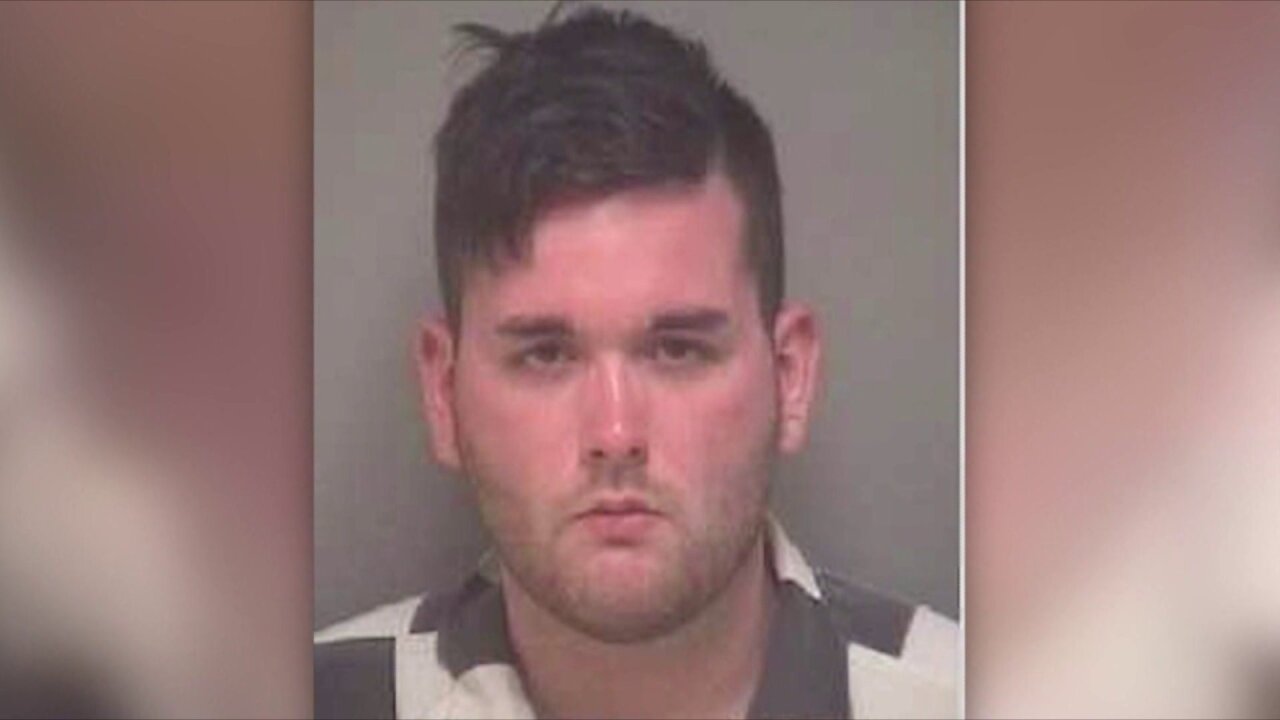 CHARLOTTESVILLE, Va. -- A jury wants James Fields, convicted of killing paralegal Heather Heyer during a white nationalist rally in Charlottesville, to serve life in prison on the murder charge, it decided Tuesday.

They also recommended a $100,000 fine on the murder count. For the five counts of aggravated malicious wounding, the jury said Fields should receive 350 years and a $350,000 fine, and for the three counts of malicious wounding, he should get 60 years and a $30,000 fine. For the final count of leaving the scene of the accident, the jury ruled Fields should be imprisoned for nine years.

Fields looked straight ahead and gave no audible reaction as the verdict was read.

Judge Richard Moore will formally sentence Fields on March 29 and can rubber stamp or overrule the jury's decision. Moore will also decide if the sentences will run concurrently or consecutively.

After 16 months of anguish, Susan Bro finally confronted her daughter's killer in a Virginia courtroom on Monday.

"Some days I can't do anything but sit and cry as the grief overtakes me," she said.

Fields was attending last year's "Unite the Right" rally in Charlottesville when counterprotesters demonstrated against the white nationalists. That afternoon, Fields got in his Dodge Challenger and plowed into the counterprotesters at about 28 mph, killing Bro's daughter, 32-year-old Heather Heyer.

Bro said Heyer's death "was like an explosion" to the young woman's friends and family.

"Almost all members of the family have been in... therapy, to push back the darkness," Bro said. "My world exploded, and I can't go back to the way it was."

At one point, Bro struggled to read her statement.

"I'm sorry, I just have a little bit of trouble seeing through the tears," she said.

Bro detailed the fatal injuries suffered by her daughter.

"Heather had contusions to her chest, the result of that was her aorta was severed." she said. "She bled out internally in just a few seconds."

Attack survivor: 'I have had pain that words cannot describe'

The pain coursing through Jeanne "Star" Peterson's body is a daily reminder of Fields' attack.

"James Fields knocked me over and then ran over my leg," Peterson said during her victim's impact statement Monday.

"The metal holding my leg together has harbored one infection after the other."

Peterson lifted herself out of her wheelchair with her arms to get on the witness stand. There, she recalled seeing Heyer shortly before her death.

"I saw Heather fly through the air the moment I was struck," Peterson said. "All I could see was what was directly on top of me."

She said the nerve pain she suffered from the attack felt as if someone was continuously pulling her hair out.

"The past 16 months have been a nightmare," Peterson said. "I have had pain that words cannot describe."

She said her 7-year-old boy doesn't want to go out in public with her anymore because he thinks bad people might attack.

Peterson has no good explanation about why anyone would want to attack the way Fields did.

"I can't answer why someone would do this on purpose," she said.

Heyer, a paralegal, was devoted to helping people and had a passion for justice, her family said.

"If you knew Heather, you would know that she loves everyone and all she wants is equality for everyone, no matter who you love, no matter what color you are," Blair said.

It's not clear when the judge will formally sentence Fields for the murder of Heyer.

In addition to the state charges, Fields also faces 30 federal hate crimes charges. The next step in his federal case is a status conference on January 31.