RICHMOND, Va. — Monroe Park reopened on Thursday afternoon in downtown Richmond after a long anticipated wait by those in the VCU community. Under cloudy skies and drizzling rain, around 100 people gathered at the park’s new satellite police station to watch VCU President Michael Rao and Richmond Mayor Levar Stoney cut the ribbon to officially reopen the park.

“This park, like other great parks in our city, should remind us of the value of lifting our heads up once in awhile to just take a deep breath,” Mayor Stoney said at the reopening ceremony.

Thanks to the hard work of the Monroe Park Conservancy, VCU and City of Richmond staff, Monroe Park is officially reopened! pic.twitter.com/lcaHruFWPY

Built it 1851, Monroe Park started out as Western Square.

Stoney said leaders at the time realized the importance of enjoying what the big, green space had to offer. He said that idea had not been lost on the planning committee.

“There were certain improvements that happened over time, but nothing of the magnitude that you see here today,” President Rao said. 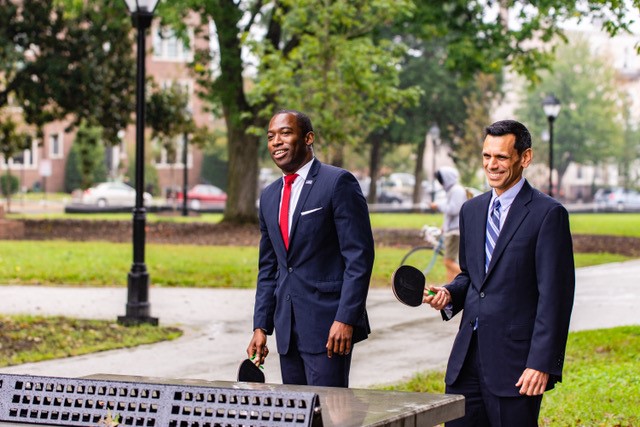 The $6 million renovation included a fountain from 1906, 132 new trees, and more than 13,000 new shrubs and plants. The park is 100 percent self sustaining as well, because of a bioretention wall that surrounds the park to help keep the James River clean.

“It goes all the way around the park and captures water. All the paved areas are permeable, that water will then be used to irrigate the park,” Brian Shaw, senior executive director for institutional affairs and constituent relations at VCU and a member of the Monroe Park Conservancy, said.

VCU police chief John Venuti called the park a great environment for students and members of the community.

“The way the park has been reprogrammed with the lighting, VCU now has security cameras that cover a large part of the park,” he said. “I think all the work that has been done has made it a much safer environment.”

When announcements of the park shutting down for renovations were made two years ago, some members of the community were concerned about the displacement of the homeless population that previously frequented the park.

With its opening, those questions remain.

Among those rules are no alcohol, no drugs, no disorderly conduct, and no hanging around the park after it’s closed. The park is open from sunrise to sundown. While people can still walk through the park at night, staying in the park is prohibited.

VCU senior Ryan Rich is ready to see the park open again after not being able to use it for the past two years. He is excited about the renovations, but noticed a lack of benches.

“I don’t know if that’s strategic to keep the homeless community out or if there just happens to be very few benches,” he said.

Shaw said there should be no change in how people use the park.

Planning for the greenery that fills the park was done in part by 3north Architects, a local architectural firm.

Katie Harrigan, the firm’s senior project manager, said she was thrilled to see people being able to take advantage of their work.

“We’ve been invested in this project for a really long time and we’re really excited to see it come to fruition,” she said.

Monroe Park also features a colorful, public piano and a ping pong table, both of which are available for everyone to use.

Stoney said the park is a shared asset and value of civic good that is finally ready to be enjoyed by residents, students and visitors.

“Ladies and gentlemen, this is your park,” he said. “And this is a demonstration once again of another ‘one Richmond’ project.”