RICHMOND, Va. — After bouts of bad weather and delayed openings, Monroe Park is finally open to the public again in Richmond. After almost two years of renovations, the public once again has access again to the grounds, some new additions and the park’s most contentious resident.

Standing near a crosswalk leading to Virginia Commonwealth University’s main campus is a statue of Confederate General Williams Carter Wickham, a few feet away from a stone cross commemorating former Virginia Governor Fitzhugh Lee, who was himself Confederate General and the nephew of Robert E. Lee.

The 127-year-old Wickham statue is one of the park’s more prominent monuments, newly presented in a political climate different from the one it was fenced off from when work began in November 2016.

“I don’t think they’re really necessary,” VCU sophomore Heather Winn said. “I think we have history books to remember those sort of things and memorials sort of inherently convey some sort of reverence for the figure.”

Last year, brothers Clayton and Will Wickham, great-great-great-grandchildren of the general, reached out to Richmond Mayor Levar Stoney and the Richmond City Council to request removing the statue from the park or have it reinterpreted, citing the large number of people related to similar figures speaking out against similar memorials.

Besides sending a letter to Stoney, the Wickhams met with Alice Massie, president of the Monroe Park Conservancy, the non-profit shepherding the park’s renovation.

“Our ancestry is something we have to grapple with and can’t ignore as people, and it shapes who we are and there’s the history of privilege and shame that accompanies our family history,” Clayton Wickham said in an interview with the Richmond Times-Dispatch last year.

While the signage that hung over the fences during the $6 million park revitalization marked the involvement of the city government, VCU, and the Monroe Park Conservancy in the project, the details of how this relationship works following the park’s unveiling are a bit more complex. This has an impact on how to deal with the statues. 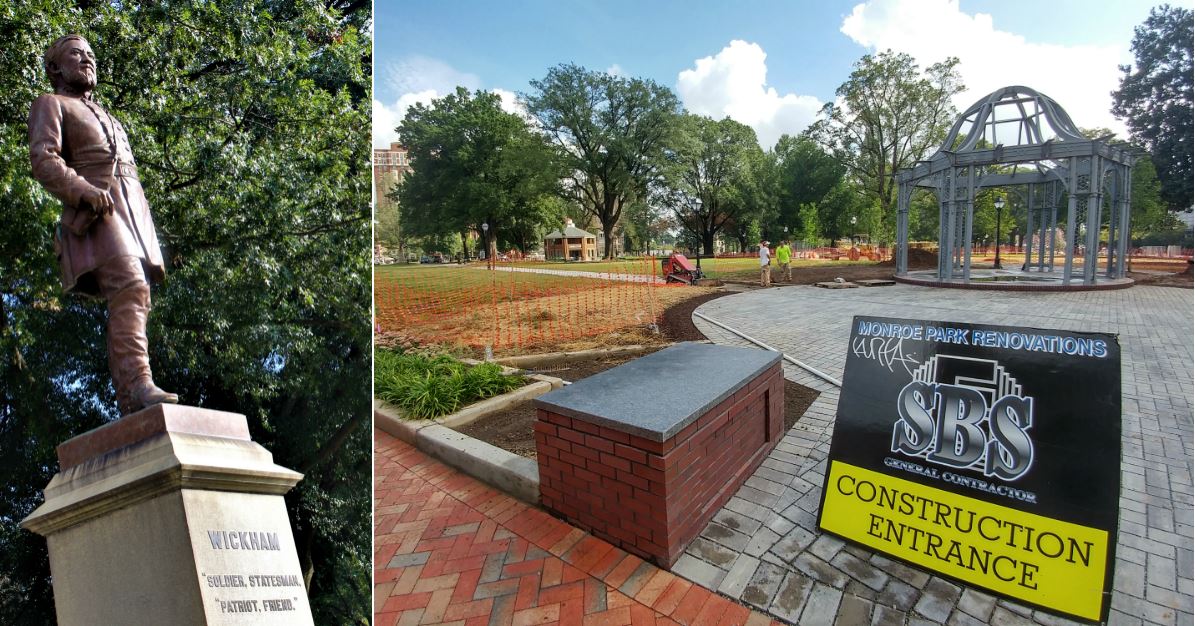 According to Massie, the non-profit serves as the park’s 30-year tenant, with ownership of the park itself and its structures falling to the City of Richmond.

In an effort to determine a proper course of action, Stoney appointed a commission to find a solution to the issue. Last July, the group presented a 115-page report that recommended among other options to remove the monument for Confederate President Jefferson Davis.

A legal opinion issued last November by Richmond City Attorney Allen Jackson suggested that the City Council does not have the authority to make the final decision and that removing the statues would require approval by Virginia’s state legislature.

While it hasn’t been made clear how or when the General Assembly will act on the commission’s recommendations, some haven’t been encouraged by how the situation has been handled .

Nicholas Da Silva, chair of the VCU chapter of Young Democratic Socialists of America, expressed full support for the commission’s work, while also criticizing city officials for their “rather craven” approach to the issue. Da Silva was also critical of the park renovation itself, for forcing out the homeless population that would congregate on the grounds and VCU’s extensive involvement in both the conservancy and the overall project.

VCU itself has multiple Confederate memorials on its two grounds, including at the Tompkins-McCaw library on its medical campus and behind the Cabell Library on the main campus, and has commissioned an audit of these memorials to determine how to deal with their presence.

“We condemn the monuments to confederate collaborators,” said Da Silva. “They serve to highlight and glorify a shameful part of Richmond's past and belong in a museum or a junkyard.”

The YDSA, along with other organizations, have protested the multiple new Confederate rallies that have taken place along Monument Avenue. These rallies have collectively cost the city over half a million in police expenses.

While there hasn’t been any word about Monroe Park from groups and organizations known to rally in defense of Confederate symbols, Richmond and VCU police are clearly set to monitor the park closely, as evidenced by the banners of both departments hanging on the Checkers House near the park’s center.

When asked about their response to a possible rally or protest in the park, Richmond Police spokeswoman Chelsea Rarrick pointed to their years of experience with similar events and regular patrols of the area.

“Our goal is to allow citizens to express their First Amendment right to speak their minds while protecting and maintaining the safety of the general public,” Rarrick said.

Although Monroe Park is open, it isn’t finished, with a bronze casting for the pavilion waiting for a consistently drier climate, and new public restrooms in need of further funding.

“It looks like its gonna be nice,” said VCU student Winn about the park. “I don’t know what it looked like before, but I’m excited to have a park cause I’m from a rural area, so I kind of miss more nature spots.”

By George Copeland Jr. and Irena Schunn (Special to WTVR.com)