Rumors have been floating around Kings Dominion since the 50’s – of a wedding at Darkside Manor that ended in the disappearance of the entire wedding party. After this horrific event, the property was sealed and forgotten about until this year. Rumor has it that people can hear strange sounds and figures that can only be described as the supernatural. Grab a flashlight and follow a group of paranormal investigators through complete darkness to see if the reports are true.

For years, The Yard of Doswell State Penitentiary was the only place the prisoners could go to get out of their cells and escape the close eye of the evil warden and his guards. The vindictive warden ordered all inmates to be confined to their cells and demanded his sadistic guards to torture and permanently silence the prisoners. Their souls were left in one unmarked mass grave – The Yard. The guards of Doswell State still patrol The Yard ready to silence their next prisoners. 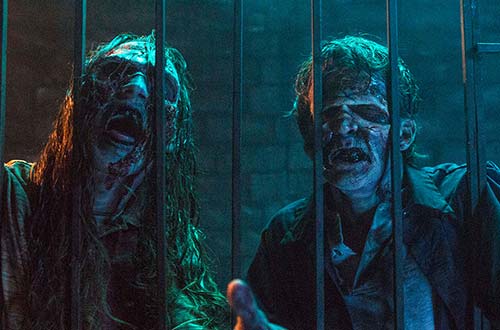 The apocalyptic sounds of Blood Drums rule the night with an explosive blend of percussion that will leave you in the wake of its heavy beats. Featuring a mixture of heavy junkyard grunge and raw rhythms, Blood Drums will get your heart pumping.

Halloween Haunt will be held select nights September 22 through October 28. This includes eight mazes, five scare zones and a variety of live shows. The night-time event will include access to more than 20 rides, including Twisted Timbers, Intimidator™ 305 and Dominator.

More than 400 monsters descend upon the park at 7 p.m.

Visit KingsDominion.com for the most up-to-date hours of operation information.