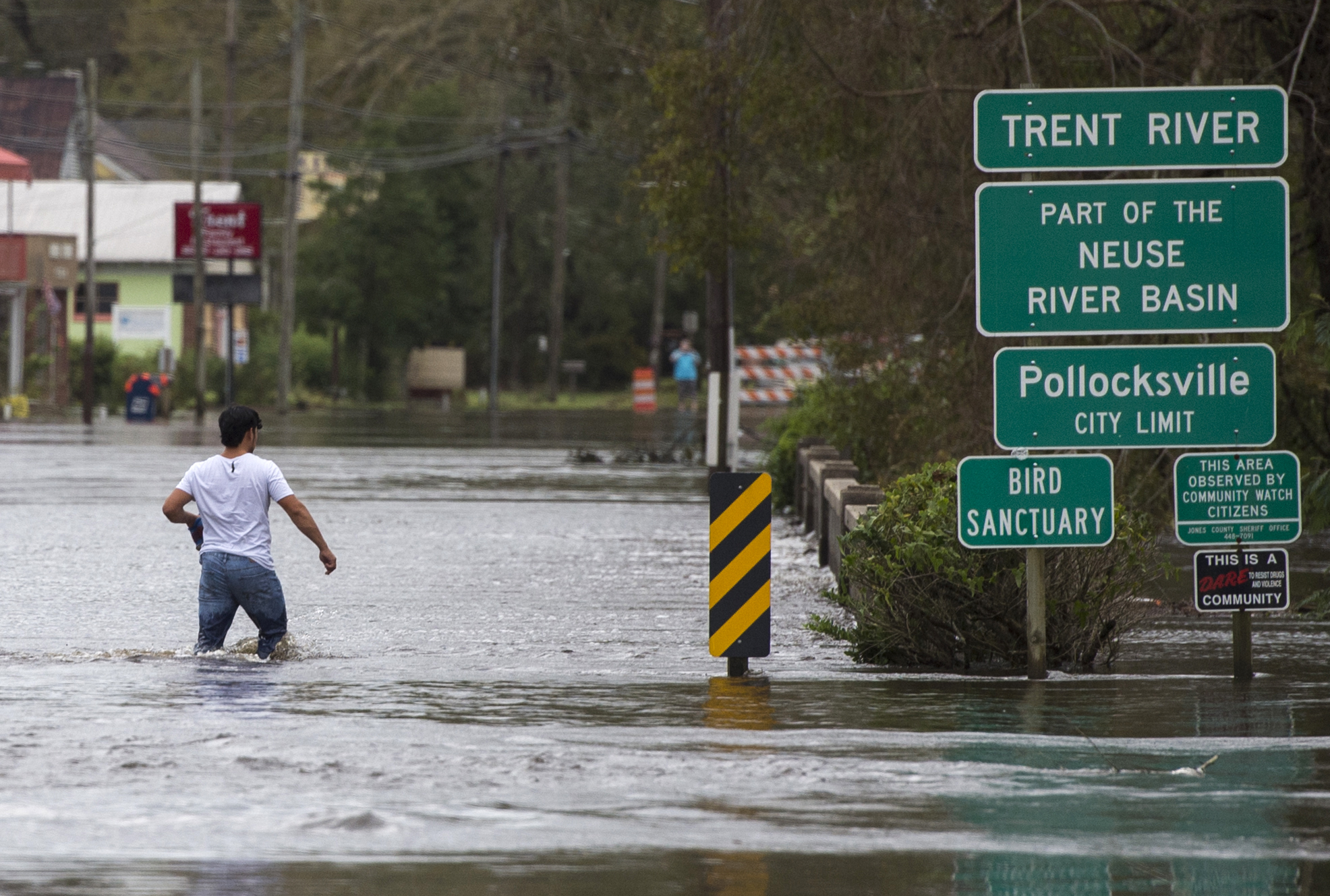 That’s the reality in wide swaths of eastern North Carolina in the watery wake of Hurricane Florence.

What is left of Florence is dragging itself north, dumping heavy rain as it moves into the southern Appalachian Mountains Monday morning.

The storm has already killed at least 18, trapped hundreds and made parts of North and South Carolina impassable — but authorities say the worst flooding is yet to come.

The rain will bring an elevated risk of mud and landslides to the mountains of west North Carolina but that will diminish through the day, he said.

“The issue for the Carolinas then becomes the river flooding continuing for the rest of the week. All the rain that fell on the eastern flank of the Appalachians down into central portions of the state has to go somewhere,” he said. “This water will flow downstream to areas already impacted from flooding rains from Florence. Thus, the rivers will take some time to recede.”

Guy said North Carolina rivers including the Neuse, Trent, and Cape Fear would remain above and near record flood stage through the end of the week, exacerbating the flooding problems already felt through this past weekend.

The National Weather Service, in an update Sunday night, said the storm continues to produce “heavy and locally excessive rainfall” across parts of the Carolinas and Virginia.

“Catastrophic and historic river flooding will continue for days across portions of the Carolinas,” the National Weather Service said.

By the storm’s end, up to 40 inches will fall in southeastern North Carolina and the northeastern tip of South Carolina, the NWS said. Other parts of the Carolinas will be left with up to 20 inches of rain.

Remnants of the storm will hit the Northeast

Mountain regions of southern Virginia could also see flooding and be at risk for mud and landslides from Florence’s heavy rains on Monday, Guy said.

The rain is forecast to move from north central North Carolina up into areas of Virginia from Danville up through Charlottesville, he said. The rest of the storm will then progress up towards the Ohio Valley impacting areas in West Virginia up through western Pennsylvania.

“By Tuesday the remnants of Florence will be pushed towards the Northeast where areas from Northern Pennsylvania through central New York towards Boston could pick up some heavy rain,” Guy said. He added that those areas could see 2-5 inches of rain or more as well as flash flooding.

Lights are out and roads are closed across Carolinas
Flooding already is so bad in North Carolina that the state’s transportation department is telling people not to travel in or through the state. Numerous highways, including sections of I-95 and I-40, are closed, and road flooding has cut off the coastal city of Wilmington.

About 532,338 customers in North Carolina and 61,000 in South Carolina don’t have power. But the number of actual people without power is far greater, since a single customer can represent an entire family.

Federal and state agencies had carried out at least 1,000 swift water rescues in North Carolina by early Monday, the North Carolina Department of Public Safety said — but many more people need help.

In Lumberton, North Carolina — a city submerged by Hurricane Matthew in 2016 — residents are bracing for potential disaster as the Lumber River seeps through a patched-up gap in the levee system.

By Sunday afternoon, the river had reached nearly 24 feet and was expected to crest late Sunday or early Monday around 25.7 feet. If the river gets higher than 26 feet, “all bets are off,” city public works deputy director Corey Walters said.

At one point Sunday afternoon, part of a makeshift barrier meant to plug a low point in the city’s main levee system gave way and river water leaked through — prompting workers to try to shore it back up with construction equipment.

One family riding out the storm in a cluster of homes on the outskirts of Lumberton was content to leave their fate in God’s hands. “I just feel comfortable staying. We have our dogs and our property, so we stay,” 57-year-old Kenan Chance said.

Their homes are still damaged from Matthew, but they survived, members of the family said. Whether they stay or go, they’ll have damage to contend with.

Her father, 84-year-old Rembert Walters, says that if his relatives dispersed to different havens, he’d spend all his time worrying about them.

“We’re not going to move until this thing’s over. It’s going to wipe us out or kill us. Or bury us, or something,” he said as floodwater crept upon his porch. “‘Cause we don’t run every time this thing happened.”

Betty Walters says she has health issues that are hard to manage at a shelter. “It’s just better for us to stay at home,” she said. “I trust in the Lord. He calmed the waters and he’s going to look after us.”

North Carolina Gov. Roy Cooper said it’s not too late to go to an emergency shelter. More than 15,000 people are staying at 150 emergency shelters. And if those shelters fill up, he said, the state will open up more.

A number of the shelters also accommodate pets, who are also at risk from rising floodwaters.

Freelance journalist Marcus DiPaola tweeted that he had been involved in the rescue of six dogs in Leland, North Carolina, after they were left locked in an outdoor cage.

“We got them out, but by the time we left, the water was so high that they would have drowned. BRING YOUR PETS WITH YOU! #HurricaneFlorence,” he wrote.

Wilmington is basically cut off

The coastal North Carolina city of Wilmington, population 117,000, is so deeply submerged that no one can get in — not even aid workers carrying fuel and critical supplies.

FEMA crews and power company trucks were turned away Saturday night because of the flooding, Mayor Bill Saffo said.

Nearby Pender County, north of Wilmington, also is running out of fuel, Commissioner Jackie Newton said. Near the community of Wards Corner in that county, US 421 was a virtual lake, with waters lapping up to homes on either side, video from a CNN crew showed.

The North Carolina attorney general’s office has received more than 500 complaints of price gouging — including for hotel rooms, gas and water. Authorities have launched investigations.

Causes of death include electrocution and fallen trees

The death toll from Florence rose Sunday, with authorities saying 18 deaths have been linked to the storm:

— A 3-month-old baby died after a tree fell on a mobile home in Dallas, North Carolina.

— A man died when a his truck hit an overpass support beam on Interstate 20 in Kershaw County, South Carolina.

— A man drowned in an overturned vehicle on a flooded road in Georgetown County, South Carolina.

— A mother and a child were killed when a tree fell on their house in Wilmington, North Carolina

— A woman in South Carolina died after striking a downed tree while she was driving.

— A woman suffered cardiac arrest in Hampstead, in North Carolina’s Pender County. When emergency responders tried to reach her their path was blocked by fallen trees.

— Another person died in Pender County, according to the county’s emergency management director. No details were immediately available.

— A man was killed while checking on his dogs in Lenoir County, North Carolina.

— Another man in Lenoir County was electrocuted while trying to connect two extension cords.

— An 81-year-old man fell and struck his head while packing to evacuate in Wayne County, North Carolina.