Avoid I-95: Drivers told to ‘go around’ North Carolina

RALEIGH -- Tropical Storm Florence's relentless rain is flooding parts of the Carolinas and promises even more for days, officials said Saturday, a day after it landed as a hurricane and left at least thirteen people dead -- including a baby.

The issues prompted North Carolina to tell drivers coming down Interstate 95 from Virginia to go around -- the entire state.

"The one thing I want to prevent is thousands of people stranded on our interstates or US routes," said state Transportation Secretary Jim Trogdan.

.@NCDOT_Trogdon: We are asking out of state travelers to avoid driving through NC. I have never see flash flooding like this in our state. It is making it difficult for us to move valuable resources to areas in need. #FlorenceNC

The station posted video of a stretch of I-95 in Lumberton flooded Sunday morning. Officials said that portion of the interstate could remain closed through Wednesday, Sept. 26.

A 16-mile stretch of the highway closed Saturday because of flooding.

Officials said the flooding was only just starting.

"The flood danger from this storm is more immediate today than when it ... made landfall 24 hours ago," North Carolina Gov. Roy Cooper said Saturday morning. "We face walls of water at our coasts, along our rivers, across our farmland, in our cities and in our towns."

Current Traffic Alerts from the NCDOT.

On Sunday officials said the state was still dealing with rain from the storm.

"Heads up, central NC. The storm's effects are not over and will impact you today into tonight. Be prepared for flash flooding" NC DOT officials posted.

Please SHARE! Portions of Interstate 95 in North Carolina remain closed on Sunday. Drivers are being told to "go around" the state: http://via.wtvr.com/jXbKT

These photos were taken along I-95 in Lumberton where officials said the interstate could remain closed through Wednesday, Sept. 26.

"Heads up, central NC. The storm's effects are not over and will impact you today into tonight," NC DOT officials warned. "Be prepared for flash flooding."

The storm's center is crawling over South Carolina, but many of its main rain bands still are over already-saturated North Carolina -- setting up what may be days of flooding for some communities. 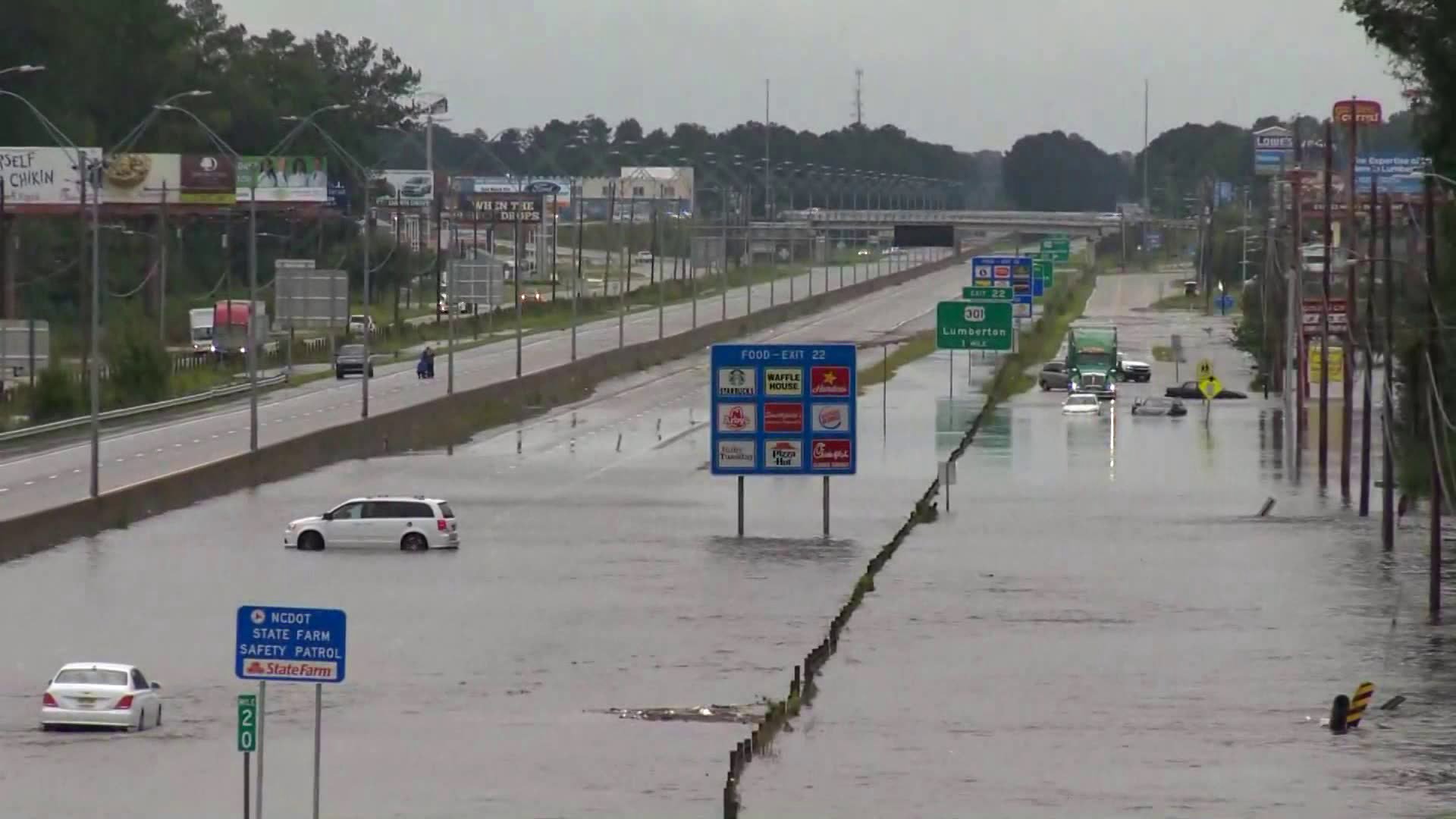 Serious flooding is expected throughout the two states, and some rivers may not crest for another three to five days.

Florence crashed ashore Friday morning in North Carolina as a Category 1 hurricane, and it has wiped out power to about 796,000 customers in that state and South Carolina.

Many major roadways across the state have been closed due to flooding. Due to the current state of many roads, the governor has recommended that out of state motorists avoid traveling through NC and that those in the state avoid traveling if possible. #FlorenceNC pic.twitter.com/aDvv8xfH2q

It has trapped people in flooded homes, with citizen swift-water rescue teams from out of state joining local emergency professionals to try to bring them to safety.