Colin Kaepernick featured in new Nike campaign: ‘Just Do It’ 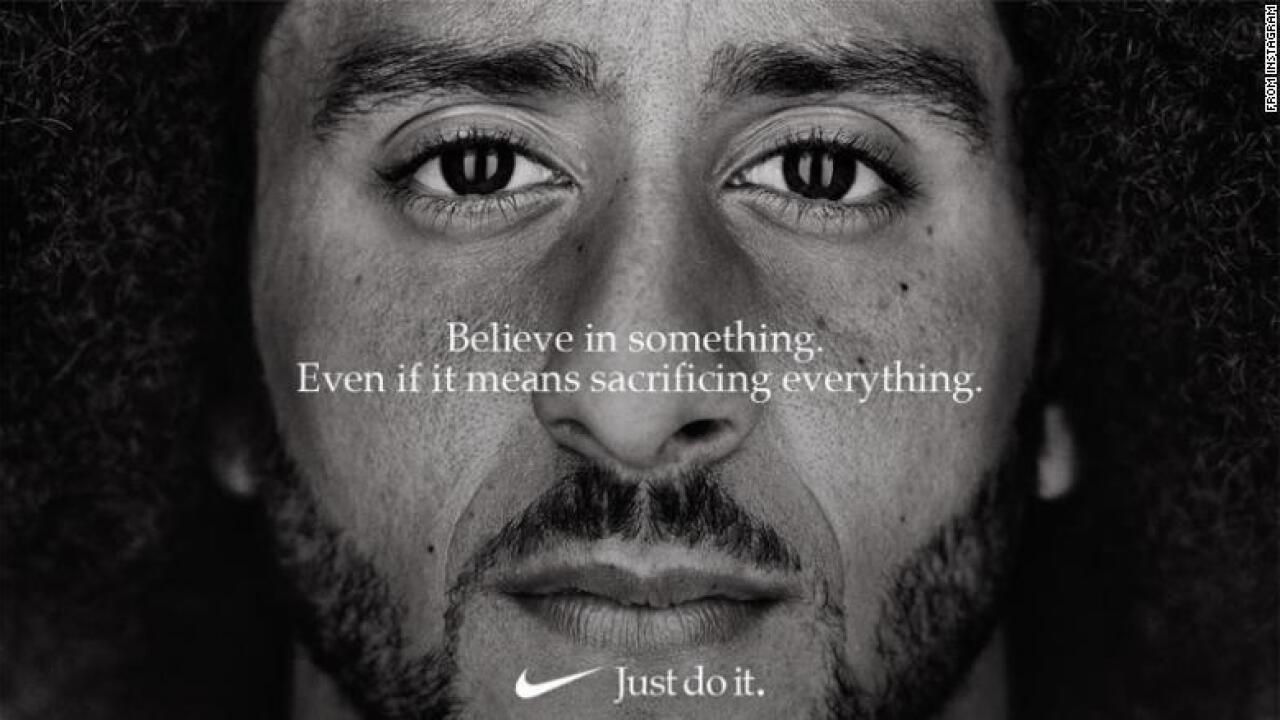 PORTLAND, Ore. — Companies and brands often attempt to avoid taking strong public positions out of fear of alienating customers, but Nike is running straight into the political fray.

Four days before a new NFL season gets underway, Nike is throwing its weight behind one of the most polarizing figures in football, and America: former San Francisco 49ers quarterback Colin Kaepernick.

Kaepernick will be one of the faces of Nike’s 30th anniversary commemoration of its iconic “Just Do It” slogan. The campaign will also feature athletes such as Serena Williams, NFL wide receiver Odell Beckham Jr., and Shaquem Griffin, a rookie linebacker for the Seattle Seahawks whose left hand was amputated when he was a child.

Kaepernick tweeted out a photo from the campaign on Monday. Over a black-and-white picture of his face, a caption reads, “Believe in something. Even if it means sacrificing everything.”

In backing Kaepernick, whom the company has sponsored since 2011, Nike is making a high-stakes gamble that its customers support his protest, or at least that enough of them do. The company is also betting its brand can withstand criticism from conservative corners, including the White House.

Kaepernick has not played in the NFL since the 2016 season. That year, he began kneeling during the national anthem to raise awareness about police brutality against African-Americans and other racial injustices. Dozens of other players also began joining Kaepernick, and he has grown into a symbol of dividing lines over race in America.

In 2017, he filed a grievance against the NFL, alleging the league conspired to keep him out because of his protests. An arbiter last week denied the NFL’s request to throw out the grievance, allowing the case to proceed to a trial.

The protests have divided the league, often pitting a conservative white owner base against the NFL’s mostly African-American players.

The owners voted in May to approve rules that would have required players to stand on the sideline during the anthem or or remain in the locker room. Teams would be fined if players did not stand during the anthem, and the rules allowed individual teams to set their own policies.

Those rules are on hold while the league and the players’ association negotiate.

Trump and his allies have repeatedly seized on the issue. At a rally in Alabama last year, Trump said team owners should “get that son of a bitch off the field” if a player knelt in protest of injustice during the anthem. Vice President Mike Pence walked out of an Indianapolis Colts game after some players knelt.

“This is a very winning, strong issue for me,” Trump told Dallas Cowboys owner Jerry Jones last year, according to a sworn deposition Jones gave in connection with Kaepernick’s lawsuit.

Nike declined to comment on whether it expected Trump to criticize the company or how it would respond if he did.

In some ways, however, Nike is protected from backlash.

The company has built itself around its star athletes, many of whom are African- American.

Top Nike athletes, including LeBron James and Serena Williams, have publicly backed Kaepernick and his right to protest.

On Saturday, Williams praised Kaepernick and former 49ers’ defensive back Eric Reid, who joined Kaepernick as one of the first to protest through kneeling and who is now also without an NFL team. “I think every athlete, every human, and definitely every African-American should be completely grateful and honored how Colin and Eric are doing so much more for the greater good,” she said.

Nike’s relationship with the NFL is also at play here. The brand is the official uniform sponsor of the NFL.

“Nike has a long-standing relationship with the NFL and works extensively with the league on all campaigns that use current NFL players. Colin is not currently employed by an NFL team and has no contractual obligations to the NFL,” Nike spokesperson Sandra Carreon-John said.

A representative for the NFL did not immediately respond to comment about the ad or whether anyone from the league saw it before it was released.

Nike’s announcement set off fierce debates on social media. The company was trending worldwide late Monday on Twitter, which counted more than 1.2 million tweets about the sports brand.

Its critics included country musician John Rich, who posted a photo showing that his soundman had cut the Nike swoosh off his socks in protest.

Rich warned Nike to “get ready,” suggesting millions of other customers would follow suit.

But many users voiced support for the brand’s decision and mocked people who claimed to be destroying their Nike products in protest, suggesting they should donate them to charity instead.

Williams said she was “especially proud to be a part of the Nike family today.”

Outspoken sports journalist Jemele Hill argued that people shouldn’t be surprised by Nike’s decision based on its history.

“Nike became Nike because it was built on the idea of rebellion,” she wrote. “This is the same company that dealt w/ the NBA banning Air Jordans. They made [Michael] Jordan the face of the company at a time when black men were considered to be a huge risk as pitch men. They aren’t new to this.”