Rally planned at ‘Lost Cause’ statue on Monument Avenue Sunday

The Richmond Police Department said the “southern heritage” group plans be at the statue from noon until 4 p.m. to protest the Monument Avenue Commission‘s recommendation to eliminate the tribute to Davis.

“We anticipate a peaceful event,” Capt. John O’Kleasky of the RPD’s Special Operations Division said. “We ask anyone who shows up on Sunday to remain calm and respect each other, regardless of their position on the issue. RPD officers will be present to maintain public safety while allowing everyone to exercise their First Amendment right to speak freely.”

Officials said officers “will not permit anyone to block traffic or act in a disruptive manner.”

Additionally, police said Monument Avenue will remain open to traffic during the display. 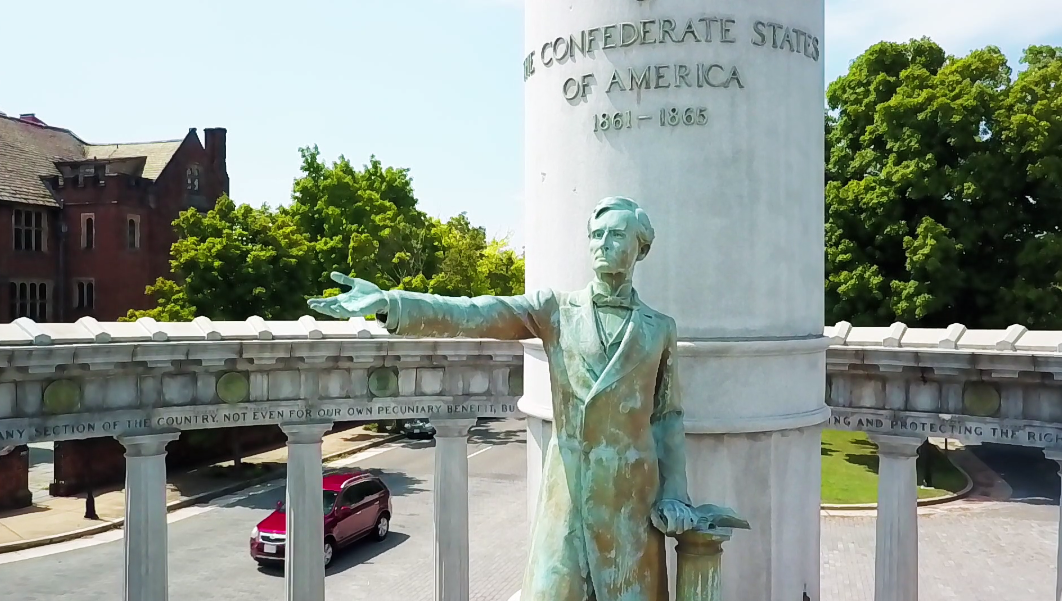 The commission was established by Mayor Levar Stoney, just days before a Unite the Right nationalist rally erupted in violence in Charlottesville, killing one person and injuring dozens. After Charlottesville, Stoney expanded the scope of the commission to consider removal and/or relocation of monuments. He expressed his personal belief that the monuments should be removed and/or relocated.

“Of all the statues, this one is most unabashedly Lost Cause [sic] in its design and sentiment,” the commissioners determined in a 117-page report, after a yearlong review and public engagement process examining the Confederate statuary of Monument Avenue. [READ: Monument Avenue Commission’s complete report]

The rally will be led by the Virginia Task Force III% – Dixie Defenders. They are supported by the CSA II: The New Confederate States of America group, who have another rally planned in Richmond in September.

“This is a great group of Confederates and we fully support their mission to save this monument and all monuments,” the group wrote on Facebook.

CSA insists that these events are not hate events, and that acts of hatred won’t be tolerated. The pro-Confederate group, based out of Tennessee, has of late expressed interest in using Richmond’s Monument Avenue to promote their agenda. They have previously staged three rallies in the city; in September and December 2017 and again in May 2018.

Each event has drawn more counter protesters than pro-Confederate supporters.

Their event planned for September 15, from 10 a.m. to 4 p.m., will be their fourth rally in Richmond. The group wrote on Facebook that they are honoring the one-year anniversary of their last event.

Neither group has a permit. The CSA group encouraged folks to bring flags but emphasized the flags on poles and signs on sticks are not allowed.

The display comes after the pedestal base of the Robert E. Lee monument was vandalized with spray paint early at some point early on Saturday, August 4.

The damage, police said, was extensive enough to warrant a felony charge. They said they are ramping up their presence around the monument to prevent further attacks.

Additionally, a $1,000 reward is being offered for information that leads to the arrest and conviction of the person or people who vandalized the statue of the Confederate general.

“While we respect the rights of people to speak freely, this was a case of vandalism, plain and simple,” Capitol Police chief Col. Anthony S. Pike said. “It crossed a line into criminal activity, and it will not be tolerated.”

The Department of General Services, who offered the reward, paid $4,400 to get clean the red paint off the west and southwest sides of the monument’s pedestal.

Anyone with information is encouraged to call the Capitol Police dispatch center at 804-786-2568 and ask to speak with the investigator on duty.