CHARLOTTESVILLE, Va. -- A crowd made up of leftist and anti-racist demonstrators gathered in Charlottesville Sunday morning and made their way to the spot where counterprotester Heather Heyer was killed when a suspected neo-Nazi sympathizer drove a car into a crowd at a white nationalist rally last year.

Heather's mother is here at the memorial for her daughter addressing the crowd. "I don't want other mothers to go through this." @CBS6 #charlottesvilleanniversary #charlottesville pic.twitter.com/Dpzxx2bYXL

Heyer's mother, Susan Bro, spoke at the memorial for her daughter.

Virginia State Police Troopers Lieutenant H. Jay Cullen III and Trooper-Pilot Berke M.M. Bates were killed in a helicopter crash after the rally. The pair were on their way to provide over-watch for the motorcade of then-Governor Terry McAuliffe when their Virginia State Police helicopter crashed in the woods along Old Farm Road in Albemarle County.

Nineteen other people were injured in the clash during the “Unite the Right” rally on August 12, 2017. An Ohio man accused of driving the car was charged with second-degree murder in Heyer’s death. Those who knew the suspect said he held extreme views and a fascination with Nazism.

Attendees of the memorial Sunday sang spirituals and held a moment of silence. But like protesters on the campus of the University of Virginia Saturday night, many expressed antagonism towards police, some of whom were dressed in riot gear and who had a large presence throughout the city to prevent any outbreak of violence.

On this day one year ago, Heather Heyer was hit and killed by a white-supremacist who slammed his car into counter-protestors in this alleyway. Now demonstrators gather to sing and honor her memory. @CBS6 #Charlottesville pic.twitter.com/aoXF1r5FIQ

"There's a profound difference in this year and last year and that is the heavy police presence," said Lisa Woolfork, an associate professor of English at the University of Virginia and a local organizer with Black Lives Matter.

NOW: Made it to #Charlottesville in the middle of the action. On the anniversary of the Unite the Right Rally where a white supremacist killed Heather Heyer, crowds marching chanting things like ‘We’re here to heal.’& ‘Were here to honor the life of Heather Heyer’ @CBS6 pic.twitter.com/lfwT8GUnxM

Some people might be comforted by the police, Woolfork continued. "But for folks like me, black and brown folks, folks in Black Lives Matter, we don't equate a heavy police presence with safety, so we see this as a perceived risk and increasing the possible harm that might occur to us."

Crowds getting more heated as police block the way to the Heather Heyer memorial. One demonstrator attempted to cross the police line. @CBS6 #Charlottesville pic.twitter.com/G4ytU8tdgX

For much of Saturday, the city appeared mainly focused on healing, with a number of vigils and memorial services scheduled throughout the weekend. Some crowds showed up in the city that day, which was under a state of emergency along with the Commonwealth of Virginia.

A group of leftist protesters known as antifa -- shorthand for anti-fascists -- marched in silence Saturday afternoon to the Heyer memorial, where some paid their respects by using chalk to scrawl messages of remembrance in the street and on the walls of nearby buildings.

Crowd size and scuffle on Water Street with Police no idea what happened pic.twitter.com/JqiSOw3B5F

Kessler had sought a permit from the city of Charlottesville to hold an event commemorating the "Unite the Right" rally this weekend, but withdrew his request in a federal court hearing late last month, according to city officials.

The hearing was part of his lawsuit against Charlottesville after it denied his permit application on the grounds it would "present a danger to public safety." 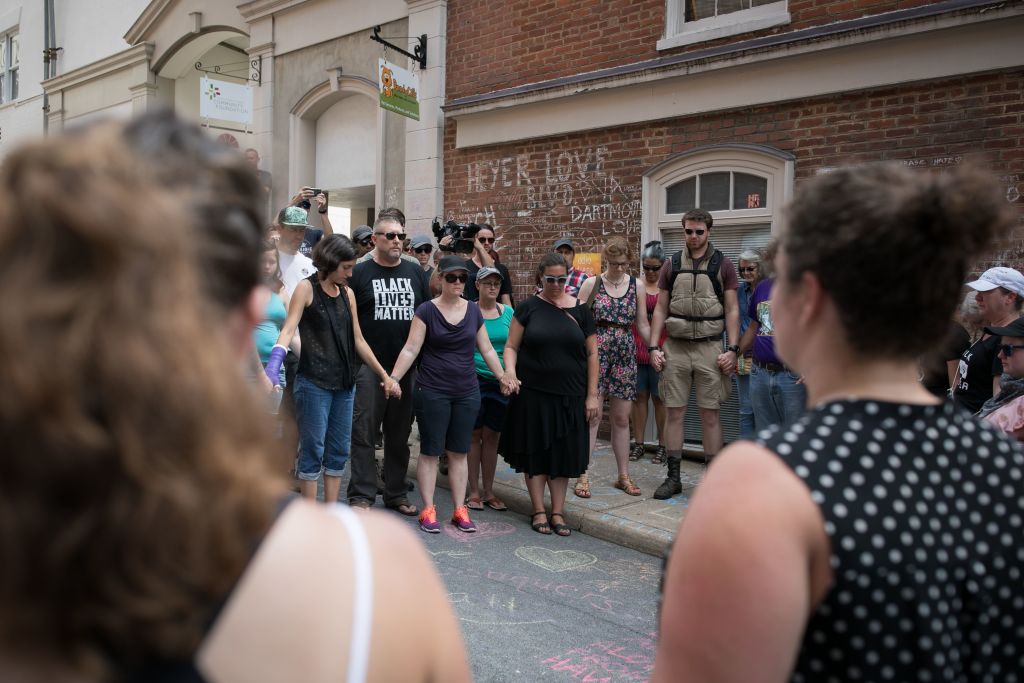