“We saw people running with their luggages because nobody knew what was going to happen they were thinking they were going to miss their flights there was tension everywhere,” said Richmond traveler Somsubhra Chatterjee. “When we came in and saw every flight was delayed and they were not able to put us on next flight that was frustrating,” he added.

Chatterjee and his wife sat in the airport all day Friday waiting for their delayed flight to depart.

At least one traveler said his plane sat on the tarmac for one hour once it landed Friday morning.

@nbc12. @CBS6 @8NEWS we are still sitting an hour after landing...there are open gates and lots of excuses...sounds like a good bit for the evening

Other travelers missed early flights and had to re-book for later in the day.

Made it to airport. Hopefully the plane will wait for us the check our bag. @Flack4RIC @Delta #JenkinsVacation2018 pic.twitter.com/obgUOQQq0e

Some travelers were alerted in advance that their flight was delayed.

“They did send us a text, so we were able to take some time at home and not be stuck on the road or at the airport,” said, Richmond traveler Lorraine McQueen.

“It would have been nice to leave on time, but I completely understand safety does come first and I was appreciative to get the text,” she added.

“If we are safe then it’s okay,” said, Chatterjee.  “We are thanking God that we are not stuck in the water that’s better.  We are arriving at our destination a bit late but that’s okay we have one week of holiday we can enjoy.”

RIC broke a 70-year record with the most rain in one hour at 4.09".  A spokesperson said, "There are 40-year+ employees at #RIC who've never seen it like this."

“Due to heavy rains, RIC is experiencing flooding in some areas, including roadways leading to the passenger terminal and some ramp areas," an airport spokesperson tweeted earlier Friday morning. "Maintenance and public safety workers are onsite as we assess conditions and work to restore services."

Astonishing rainfall stats. @NWSWakefieldVA confirmed 7.25" at @Flack4RIC since midnight. The one-hour total of 4.09" ending at 4:54 a.m. appears to be the highest for any hour there since 1948. Plus: all-time daily record in jeopardy, now wettest June ->https://t.co/07BC6UnBkj pic.twitter.com/RVO5ddrin7

Hopefully, that's a once-in-a-lifetime status report. There are 40-year+ employees at #RIC who've never seen it like this. The Airport has re-opened, but it will take some time for flight schedules to fully recover. https://t.co/59HhXZPpDZ

From @Flack4RIC - Water is receding. Airfield will open around 9AM but full airport operations will come online slowly - airport, airline employees along with @TSA agents need to get to the airport and in place before normal operations can resume. Check with your airline. @CBS6

Click here to check the status of your flight.

Airfield images taken a short while ago by Airport Ops. pic.twitter.com/zmiPDZsktQ 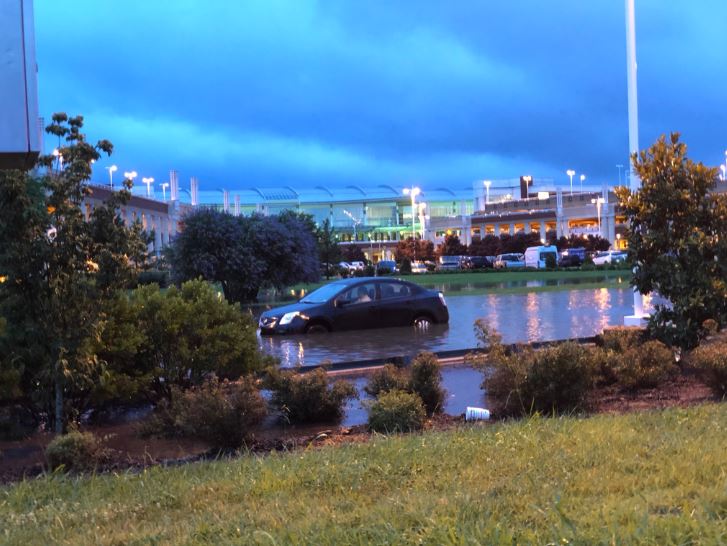