March for Marcus Peters: ‘His death was not justified,’ sister maintains

RICHMOND, Va. -- Hundreds of people marched in Richmond Saturday afternoon to remember the Essex County high school teacher shot and killed by a police officer on Interstate 95 on May 24.

The assembled crowd marched from the Siegel Center to Richmond Police Headquarters to demand justice for 24-year-old Marcus Peters. The show of support came more than a week since police body camera footage captured during the shooting was made public.

The video captured a bizarre sequence of events which eventually led to Peters, who was not wearing any clothes, running across I-95. In the officer's body camera video, Peters can be heard threatening Officer Michael Nyantakyi, a 10-year veteran of the Richmond Police Department, before fatally shot Peters.

Family members took part in the march and his sister, Princess Blanding demanded justice for his brother.

"We are fighting for justice for Marcus, which includes accountability, as far as the police officers are concerned and as far as the Richmond Police Department is concerned," Blanding said.

Blanding also said that she had never witnessed that kind of behavior from her brother and maintains that there was another way for the officer to handle the situation.

"Many of the people [at the march] I've never met before, but they agree, and it's very, very clear that his death was not justified and it should not have happened," Blading said. 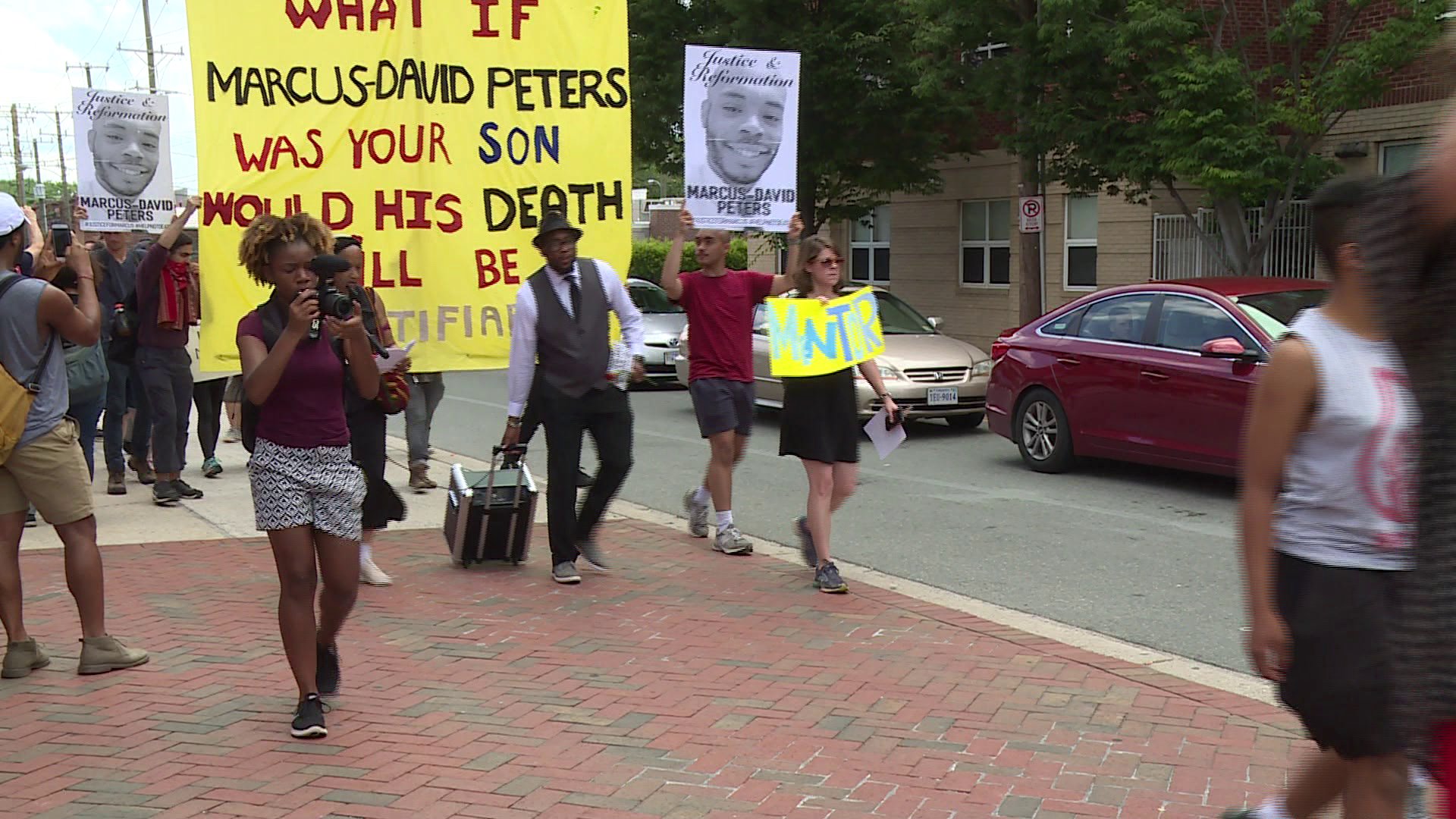 Richmond, Richmond Police Chief Alfred Durham said he broke department protocol and released the video amid the investigation, so the public could see what happened during the incident and stop the spread of falsehoods on social media.

"We are wearing a lot of hats and when incidents like this happen and folks want to beat us up over it, it hurts. It hurts the morale of my officer. It hurts me," Chief Durham said.

Richmond Police Officer Michael Nyantakyi fatally shot Peters, who was unarmed and naked, during a bizarre incident on Interstate 95 in downtown Richmond.

The police body camera video showed Peters charge and threaten to kill Officer Nyantakyi after the officer used a Taser in an attempt to subdue Peters.

“I only wish we could have helped Mr. Peters like we do with so many people each and every day,” said chief Durham. “Unfortunately, this situation didn’t turn out that way.”

What preceded the shooting was a bizarre chain of events that started inside the Jefferson Hotel. In addition to being a teacher, Blanding worked at the hotel part-time as a security guard.

Hotel security video, also released Friday, showed Peters pull up to the hotel in a car, take off his shirt in the hotel's upstairs lobby, proceed to an employee-only area of the hotel where he interacted with co-workers, then emerge from the hotel naked.

Video then showed Peters get back into his car and drive off. Driving away from the hotel, Officer Nyantakyi witnessed Peters drive erratically and get involved in an hit-and-run crash.

As Peters fled, Officer Nyantakyi pursued north onto the I-95 on-ramp, police said.

Peters lost control of his vehicle after he struck two other vehicles on the on-ramp, police added, then emerged from his disabled vehicle, and ran into the northbound lanes of I-95. He was not wearing any clothes, video showed.

Peters ran back towards the on-ramp and charged the Richmond Police officer, who deployed his Taser in an effort to disable Peters, police said.

It proved ineffective, so the officer fired his service weapon, striking Peters.

Peters was transported to the hospital where he later died.

Legal analyst on body cam video: 'It's a very unusual set of circumstances'

“The law requires that there be a reasonable threat of serious bodily harm or a threat to one’s life in order to use deadly force in self-defense," Stone said. "Here we`ve got an officer who made verbal commands to stop, and the man ignored the commands. And then the officer used a taser, which was the next level up in escalation and then that didn`t work. As the man approached him, that`s when the deadly forced was used."

“I think there are many good arguments that the officer is justified in using deadly force under the circumstances," Stone said. "And it`s a very unusual set of circumstances with the man not wearing any clothes, because you know he doesn`t have a weapon. But as you see, he's approaching an officer who does have a weapon and sometimes that weapon can be turned on the officer or someone else.”